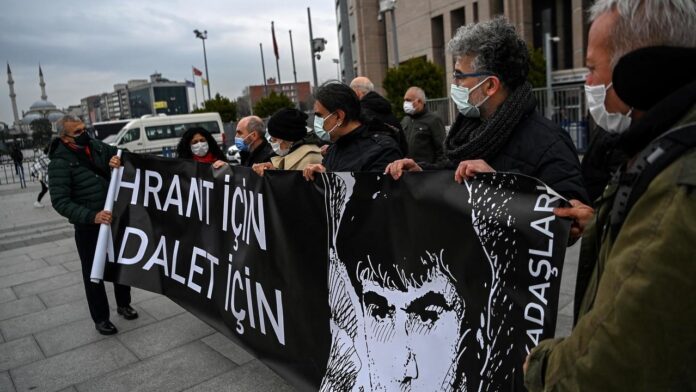 Turkish judges on Friday handed down life sentences to two former police chiefs and two top ex-security officials over the killing of a Turkish-Armenian journalist in 2007, local media reported.

Seventy-six suspects were facing charges, including failing to disclose the plan to assassinate Hrant Dink, editor-in-chief of Agos, a Turkish-Armenian bilingual newspaper.

Dink, a leading reconciliator for reconciliation between Turkish and Armenian communities, was shot twice in the head outside his office in central Istanbul.

His assassination threw Turkish Armenian society into mourning and triggered a wide-ranging trial that lasted more than a decade and involved senior security officers who were accused of being aware of the assassination plot but did not act.

Istanbul’s main court has sentenced the city’s former police chief Ramazan Akyurek and his former deputy Ali Fuat Yilmazer to life in prison for “delayed murder”, according to Agos.

Former senior commanders in Istanbul, Yavuz Karakaya and Muharrem Demirkale, were also jailed for life while charges against another top city police chief were dropped due to the statute of limitations.

Ogun Samast, then an unemployed 17-year-old, had confessed to the murder and was sentenced to almost 23 years in prison in 2011.

Ali Oz, former commander of the Interior Ministry of the Black Sea in Trabzon where the gunman came from, was sentenced to 28 years in prison on Friday.

Dink’s supporters and human rights activists still believe that the highest police authorities have gone unpunished and want the investigation and trials to continue.

“Some of those responsible for this murder, including the sponsors, have still not been prosecuted,” said Erol Onderoglu, Turkey’s representative for Reporters Without Borders (RSF), who has been following the trial closely.

“This partial justice given after 14 years leaves a bitter taste and should not mark the end of the search for the truth.”

For several years, prosecutors have been investigating alleged links between the suspected and US-based Muslim preacher Fethullah Gulen, who is accused of mastering a failed coup against President Recep Tayyip Erdogan in 2016.

The court in Istanbul on Friday found that Dink’s murder was committed “in line with the Feto goals” – an abbreviation that Ankara uses for Gulen’s banned movement, NTV reported.

In January, Dink’s wife Rakel had blamed Gulen’s movement for her husband’s death almost a decade before the failed coup was like saying, “I did not kill him, but my hand did.”