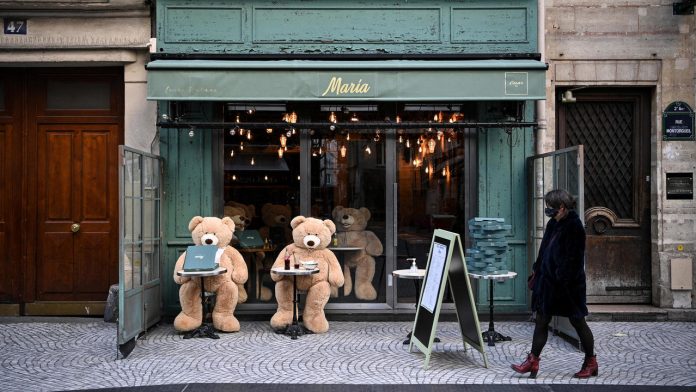 France’s expansion of a light Covid-19 lockdown from 19 areas to the entire mainland and the Mediterranean island of Corsica took effect on Sunday. It will last for at least four weeks.

The French government had tried to stop Covid-19’s resurgence with regional measures – but now all over the country, unnecessary businesses are closed and people’s journeys are limited to a radius of 10 km around their homes.

The definition of important companies is much more expansive than it was during the strict first closure in the spring of 2020: booksellers, hairdressers, flower shops, chocolate shops, music shops and car dealers can all be open.

Travel between different French regions has been banned throughout the nationwide lock-in, unless people have a “compelling” or work-related reason for it.

French President Emmanuel Macron unveiled the measures on March 31 and also announced that schools will be closed from Tuesday – for three weeks for preschool and primary school students and four weeks for middle and high school students. The “French exception” to keep schools open since the end of the first closure in the spring of 2020 had received more intense criticism in recent weeks.

The extended lock-in measures came into force after France announced on Saturday that 5,273 people were in intensive care with Covid-19, an increase of 19 from the previous day.

This rise followed a much larger jump on Friday – the highest in five months at 145.

France’s number of confirmed cases averages almost 40,000 new registered cases per day and has roughly doubled in March. The health authorities did not publish new case numbers on Saturday and cited a problem with the flow of data from certain test results.

The president also promised to “speed up the vaccine program as much as possible” – and promised that anyone over 60 will be able to get a jab from April 16 and anyone over 50 from May 15. He stressed that jabs are the way out of the nightmare: “Thanks to vaccines, the end of the crisis is on the horizon.”

But as the EU’s troubled procurement program for jab has led to slow vaccination rates, France had issued a vaccine dose to just 12.96 percent of the population on April 1 – compared to 46.11 percent in the UK, where the vaccine program has competed forward.

Only 35 percent of French people trust the government to deal with the epidemic, according to a Ifop survey published in Le Journal du Dimanche on Sunday.