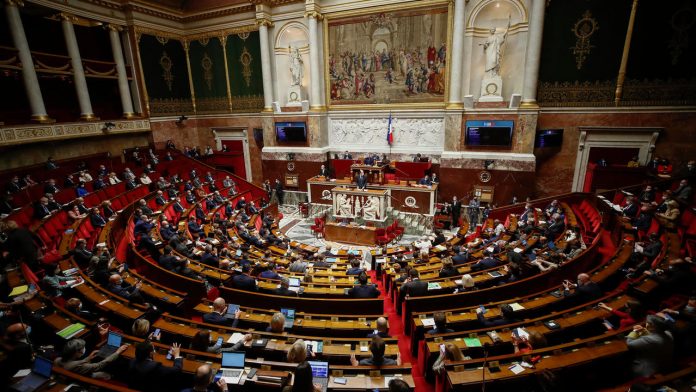 The French parliament will vote through a new law on climate change on Tuesday, designed by President Emmanuel Macron to strengthen its green credentials a year before the national elections.

It is almost certain that the bill will be approved at first reading in Parliament’s lower house, where Macron has a working majority, but it has been heavily criticized by environmental organizations.

Campaigns see it as too modest given the global pace of climate change and accuse the French leader of half-hearted commitment to something he has admitted he embraced late.

France’s environment minister, Barbara Pompili, has defended the text, saying it “will affect the daily lives of all our citizens” and is “one of the biggest laws of the (presidential) term”.

The measures include a two-and-a-half-hour ban on domestic flights that can be done by train, restrictions on renting poorly insulated properties or the creation of a new “ecocide” crime to punish polluters.

The overall goal is to introduce measures that will enable France to achieve its target of reducing its greenhouse gas emissions by 40% compared to 1990 levels with a deadline of 2030.

Lobby groups such as Greenpeace have called it a “lost opportunity during Macron’s term”, while even the president’s own environmental council said it would “have a potentially limited impact”.

It is also less ambitious than new targets for 55% cuts agreed at EU level and is outside a German plan rejected last week by the country’s constitutional court as “inadequate”.

Climate change and environmental protection are likely to be bigger themes in next year’s presidential election than the last one in 2017, which Macron won while barely fighting for the issue.

The leading Green Party in France made big gains in cities such as Strasbourg, Bordeaux and Lyon in local elections last year, reflecting a trend across Europe in favor of environmental organizations.

The Climate Act has also been a test of what Macron described as a more inclusive form of government that has seen the public invited to help draft legislation.

After government riots by so-called “yellow vests” protesters in 2018, he promised to change his leadership style, which critics considered too centralized and removed from the public.

One hundred and fifty people were randomly selected to form a “Citizen’s Convention on Climate” which was commissioned to recommend measures that would enable the country to achieve its emissions targets.

But after seeing the legislation presented to Parliament, many Members felt betrayed and accused Macron of refraining from committing to adopt his ideas.

Cyril Dion, a leading actor from the convention, attended a protest rally calling for bolder action in March, saying the law “absolutely does not enable France to achieve its goals.”

The government is counteracting what is trying to find a balance between reducing emissions and at the same time protecting workers and industry at a time when the economy has been exposed to the Covid-19 pandemic.

“With the law, we are taking a fine line and making big changes while keeping it economically and socially acceptable,” Pompili told the Financial Times last week.

Macron was supported by protests from the “yellow vest”, which was originally triggered by environmental policies such as raising taxes on diesel as well as old, polluting cars.

His predecessor Francois Hollande was forced into a reversal by truck drivers, known as “red hats”, who protested against his efforts to impose an environmental tax on heavy trucks.

Even if adopted by the House of Commons and the Senate, the new law will almost certainly need to be updated in order for France to meet the European Union’s emission reduction targets.

The European Parliament and EU Member States agreed on a target at the end of April for cuts of at least 55% by 2030 from 1990 levels – compared to the 40% target in French law.