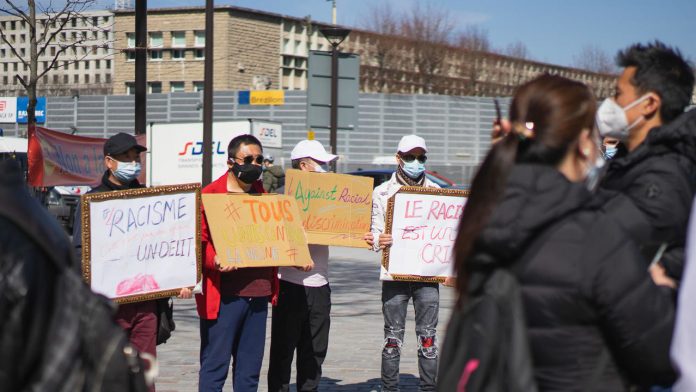 “It was just to make my friends laugh” – it was one of the five young men accused of tweeting threats and insults directed at the Chinese in October last year said in a courtroom in Paris on March 24 when activists and community leaders in France’s Asian societies watched.

The tweets, which were published shortly after French President Emmanuel Macron announced on October 28 that France would enter its second lock-in of coronavirus, blamed the Chinese for the new home restrictions.

For Laetitia Chhiv, president of the Association of Young Chinese of France (AJCF), tweets were no laughing matter. Speaking to the panel of three judges, she described the shock of looking at her phone and seeing messages on social media demanding violence against the Chinese.

“I had never seen it,” Chhiv said. “It really struck me: This form of racism has been normalized.”

The trial began with a special unit launched in January to combat online hate. Chhiv described the procedure, the unit’s first, as an “important moment” for French Asian society.

“That we’re talking about the Asian community for an inaugural event is really something,” the 35-year-old activist said.

On the day of the hearing, Chhiv attended a meeting with France’s Minister for Gender Equality, Diversity and Equal Opportunities, Élisabeth Moreno, along with members of seven organizations representing people of Asian descent in France, to discuss the government’s commitment to combating racism and discrimination. .

Two legislators who wrote a report on racism in France that included the AJCF’s contribution also participated. The verdict is expected on May 26.

The report mentions the “increase in anti-Asian racism” in France in 2020, said Chhiv, a phenomenon confirmed by the “exponential increase” in reports of discrimination that her organization has received since the end of January 2020.

Sun-Lay Tan, spokesman for the Comité Sécurité Pour Tous (Security Committee for All), an advocacy group for French Asian societies, also attended the meeting with Moreno. He wants more visibility for Asian cultures and advocates that Asian dishes be included in school cafes.

“[The cafeteria is where] children discover other cultures, Tan said, adding that he first tasted couscous, a North African grits-based dish, at school in France.

Tan, 42, also said he would like to see multicultural content in history books in middle school and high school. He mentioned the approximately 140,000 Chinese workers who came to France in 1916 to support the French and British armies during the First World War. A statue was installed outside Paris train station Gare de Lyon 2018 to commemorate this event.

“When I went to school, I learned about Napoleon, Louis XVI, Louis XV … we did not learn about this,” he said.

In solidarity with US activism

Dozens gathered to protest anti-Asian racism outside parliament in Paris on March 24 and carried signs including “In Atlanta or in Paris, no to anti-Asian racism”, a reference to the deadly shootings of six women of Asian descent in the United States the state of Georgia on March 16.

Although an incident of this magnitude has not affected French Asian society during the pandemic, several French Asians in the Paris region have been attacked. A middle-aged woman of Vietnamese descent was attacked at a bus stop just outside the 13th arrondissement (district), home of Paris’ largest Asian population, on October 20, and days later a young student of Asian descent told police he was “beaten up” and is verbally attacked in a park in the 19th arrondissement, the French daily Le Parisien reported.

The Covid-19 pandemic has triggered “new dimensions of Asian racism”, the French Institute for National Demographic Studies reported in May.

That same night, Macron announced the second lock and the five men who were on trial published their tweets, a man of Asian descent was attacked while walking his dog in the 13th arrondissement and suffered a displaced shoulder.

In 2016, tailor Zhang Chaolin was violently beaten to death on a quiet street in northern Paris, an attack that sparked mass protests from the Asian community and sparked a nationwide debate on anti-Asian violence in France.

AJCF is releasing a video on Monday entitled ‘We Belong Here’, a series of photographs of people of Asian descent on the roof of a popular shopping center in the 13th arrondissement.

Chhiv said the video was intended to show solidarity with the #StopAsianHate movement in the United States and link it to recent events in France.

“We made this video to show the link between all of this,” she said.