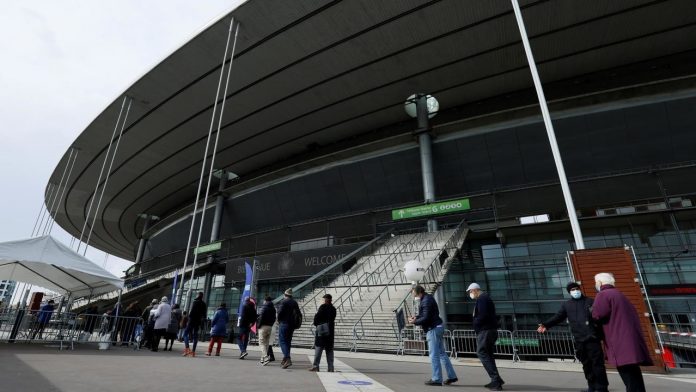 On Tuesday, France transformed its largest stadium, the Stade de France, into a giant vaccination center, called the “vaccinodrome”, as the government competes to keep its promise of a giant leap forward in the administration of Covid-19 jabs.

The Stade de France on the northern outskirts of Paris, with a seating capacity of over 80,000, is one of almost 40 “vaccinodromes” that will open in the coming weeks as the country faces a third wave of the Covid-19 pandemic.

FRANCE 24’s Luke Shrago reported from the arena and said that people from the Seine-Saint-Denis department, where the Stade de France is located, started arriving early on Tuesday.

“The queues stretch behind me. People have been arriving all morning at the Seine-Saint-Denis ward, which has been hit hard by the virus. At least 50 percent of the vaccinations here initially go to local residents, says Shrago. “Healthcare here aims for 10,000 jabs a week.”

Seine-Saint-Denis, one of the poorest wards in France, has been hit exceptionally hard by Covid-19 and has registered 800 cases for every 100,000 inhabitants – more than three times the threshold.

The opening of vaccinodromes across France is a visible sign that the health authorities are increasing the vaccination rate after criticism of the slow initial rollout due to delivery problems.

In March, the southern city of Marseille opened its velodrome for vaccinations and Lyon followed suit last week, making its Groupama Stadium available, which reported 10,000 vaccinations during the Easter weekend alone. In the Paris area, a velodrome also opened in the suburb of Yveline southwest of the French capital last month.

France is experiencing a third wave of coronavirus pandemics, with intensive care intake rising past the worst levels of the second wave in November 2020.

In response, the government has extended regional measures, including curfews and restrictions, to the entire country and closed schools.

President Emmanuel Macron has promised a sharp acceleration in vaccination, aiming for a total of 20 million vaccinations in mid-May for the nation of 67 million and 30 million in mid-June.

More than one million new vaccinations were reported over the weekend, which means that the sum of having received at least one dose of two-course treatment is 9.3 million.

The more than 5,400 coronavirus patients in intensive care are still far from the 7,000 registered in April 2020 just after the start of the pandemic, but Health Minister Olivier Véran said on Monday that “it is possible that we are approaching” the first wave peak.

After interrupting or delaying meetings with non-Covid surgery, France now has a total capacity of 8,000 intensive care beds available for coronavirus cases, he said.

The Ministry of Health said it expected the number of infections to peak in the coming week, but that another increase was likely when primary school students returned after a spring break at the end of the month.