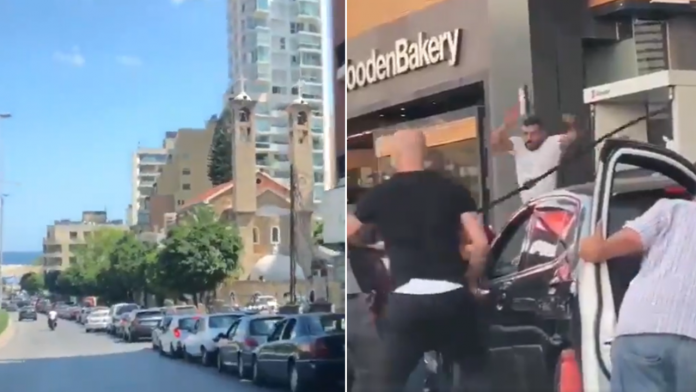 Things have been crazy outside gas stations across Lebanon in recent weeks – a gas shortage has resulted in tense, hours-long queues, in some cases escalating into knife fights and gunfire. Our observer in Beirut told us about the “humiliation” and stress the Lebanese have felt as they face the latest effects of the economic crisis hitting the country.

The value of the Lebanese pound has fallen sharply in recent months. On June 17, the exchange rate was 14,800 pounds per US dollar.

Against this background, the price of petrol at the pump has risen several times in recent months, even though it is still partially subsidized by the government. On June 17, the government announced that the price of a 20-litre can of unleaded petrol would rise by £1,700. [around €0.94] up to 43,000 pounds [around €24].

And as the Lebanese government has cut imports of hydrocarbon products in recent months, gas stations across the country have been closed. Some have started rationing their customers to pump only 10 liters of gasoline at a time.

This has created long queues – sometimes for miles – for the stations that are still open. Videos circulating on social media show tensions rising and arguments between angry customers.

In this video, gunshots can be heard outside a Total gas station in the Qasqas neighborhood of suburban Beirut on June 16.

Jalal Naanou is an independent journalist based in Beirut. He stands in line for gas for at least three hours a day:

In recent months, Lebanon’s central bank has been slow to settle import bills, prompting companies to demand advance payments. The shortages have been exacerbated by the fact that some unemployed youth have bought gasoline and sold it on the black market to the wealthy. As a result, the amount of gasoline that people can buy at the pump has decreased significantly.

Waiting three hours a day under the boiling sun for a gas station is unbearable, unjustifiable. People find this situation humiliating. Sometimes you stand in line for hours and then when you get to the pump the employees tell you that there is nothing left and that you have to come back the next day.

So it is not surprising that people lose their cool and break up fights.

One of many gas station queues in Beirut. Video posted online on June 17.

Fights often break out when someone tries to line up and pass in front of other people.

At first, we were shocked to see videos of fights and gunshots being fired in front of gas stations. But now it has become routine. Lebanese soldiers and other security forces have been deployed to certain stations in recent days, but they cannot be everywhere. I think cities should send the police as reinforcements, which they haven’t always done.

Shots were fired by an unidentified gunman when a brawl took place outside a gas station in Beirut’s Tariq El Jdideh neighborhood on June 11, 2021.

A shot is fired in a tense scene outside a gas station in Beirut. This video was posted on June 1.

These deficiencies affect every part of people’s daily lives. School bus companies recently told families, ‘If you want your kids to go to school, drive them yourself, we’re out of gas.’ I also know teachers who can’t go to school, even though exams are now taking place.

Economy Minister Raymond Rajar said in April that the shortage was “largely the result” of petrol smuggling into Syria. But journalist Jalal Naanou does not take it:

It is true that gasoline is illegally shipped to Syria every day. The Lebanese army often seizes smuggled petrol at the border. But we cannot allow politicians to use smuggling that happens all over the world as an excuse for their incompetence and inability to get the country out of this crisis.

Lebanon suffers from a shortage of many other products, including certain medicines and baby food.

Half of all Lebanese live below the poverty line as a result of the economic crisis, which has been worsening for almost two years now. Protesters regularly take to the streets, shutting down traffic and calling for a complete turnaround of the Lebanese leadership, which they view as “incompetent” and “corrupt”.