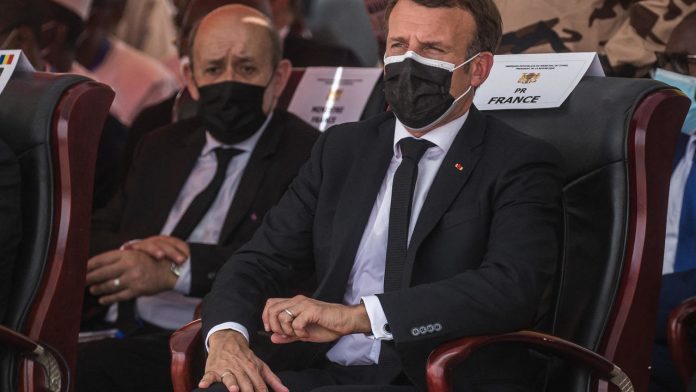 France on Tuesday called for the establishment of a civilian national unity government in Chad, a clear change of stance and a sign of the sensitive balancing act Paris must take as it seeks to ensure stability in the region following the death of veteran Idriss Deby last week. . Chad has been a key French ally in the fight against jihadists in Africa’s troubled Sahel region.

Shortly after Chad’s president Idriss Deby Itno died – reportedly due to wounds he received while visiting soldiers fighting rebels in the north of the country on April 20 – his son Mahomet Idriss Deby Into, a four-star general, president and chief of staff, was declared military council that takes care of the country.

Mahomet Idriss Deby promised to monitor an 18-month transition before elections are held. The African Union expressed its “serious concern” for a military regime. Opposition figures called the move a coup.

The Élysée Palace lamented Idriss Deby’s death in a statement describing him as a “brave friend” to France who “worked tirelessly for the country’s security and the region’s stability for three decades”.

President Emmanuel Macron was the only Western head of state to attend Idriss Deby’s funeral on April 23, promising that France would continue to stand with Chad. “France will never allow anyone, neither today nor tomorrow, to challenge Chad’s stability and integrity,” he said at the ceremony.

France originally supported Mahomet Deby’s transition plan involving the military leadership – with Macron saying at the funeral: “The transition will play this role: stability, inclusion, dialogue and democratic transition. We are and will stand next to you. ”

Ahead of the funeral, Macron held talks with the military council led by Mahomet Deby on April 22. Diplomatic and defense sources have suggested that French armed military intervention be short on the Front pour l’alternance et la concorde au Chad (Front for Change and Compliance in Chad) – the rebel group responsible for Idriss Deby’s death, which is not linked to jihadist uprising in the Sahel – would come close to the Chadian capital N’Djamena.

But Paris seemed to change its position on the role of the military council in Tuesday’s transition, demanding instead a “civilian national unity government” to lead “an inclusive transition process open to all Chadian political forces” that “would lead to elections within an 18-month delay” in a joint statement by the Élysée Palace and the Government of DR Congo.

Macron said in separate comments on Tuesday that he advocates a “peaceful, democratic, inclusive transition” and is not in favor of a “succession plan” – adding that “France will never support those carrying out such a project”, apparently referring to Mahomet. Deby.

The French president also said he “strongly condemned the repression of the demonstrations” in Chad on Tuesday. At least two people were killed and at least 27 were injured when security forces attacked protesters demanding a return to the civilian government and fighting a ban on demonstrations during the late president’s national mourning period.

Many Chadian protesters “see France as part of the problem”, Jowharcorrespondent Cyril Payen reported on Tuesday – noting that he had seen “many French flags burned” that morning in N’Djamena. Much of the Chadian opposition and civil society saw Macron’s presence at Idriss Deby’s funeral as “support” for the military council led by Mahomet, Payen explained.

This is the kind of situation that Paris is anxious to avoid in Africa: successive French governments have been determined to free France’s African policy from all reminders of the Francafrique paradigm of client relations with ex-colonies.

France had been Idriss Deby’s main international ally since he took power more than three decades ago. Paris offered reconnaissance and intelligence to its forces in the fighting against northern rebels who saw Deby killed on the front lines – after providing direct military aid to Chad in 2009 and 2013 to defeat rebels who tried to overthrow him. In doing so, “France protected an absolutely great ally in the fight against terrorism in the Sahel,” French Defense Minister Florence Parly told parliament in 2019.

In fact, Deby was a strong supporter of France’s anti-jihadist military operations in this large, sparsely populated sub-Saharan Africa region, where governments find it difficult to control large territories.

In early 2013, France launched a military campaign aimed at helping Mali regain territory seized by Islamist extremists who had hijacked a Tuareg uprising in the country’s northern desert last year. The French military managed to direct the Islamists, but the jihadist uprising soon spread throughout Mali and across the border into Niger and Burkina Faso.

Experts believe the Chadian military is the strongest in the G5 Sahel – the regional bloc was transformed into a military alliance on behalf of Paris 2017 and brought together forces from Mali, Niger, Chad, Burkina Faso and Mauritania.

France has no real economic interests in Chad other than selling weapons; everything comes from a military and strategic point of view, says Thierry Hommel, head of the French research organization Forum prospectif de l’Afrique de l’Ouest Futuribles (Forum on West Africa).

“France’s military policy in Africa is highly dependent on Chad; that is the starting point for so many of its activities, Hommel continued. “And when you look at Chad on a map, you see a locked country with instability everywhere – across the borders of Niger, Nigeria, the Central African Republic, Sudan, Libya – and France sees in Chad a very central position that you want to occupy.”

France saw Deby as a strength of stability from this geostrategic perspective – but statistics suggest that he was not a force for economic development. Despite oil reserves estimated at 1.5 billion barrels in 2019 by the Extractive Industries Transparency Initiative NGO, Chad ranked 187 out of 189 on the UN Human Development Index 2020. Chad also has the world’s fifth highest infant mortality rate according to the CIA World Factbook.

“Regardless of who runs the country, future stability in Chad will require much improved development work,” said Paul Melly, a Sahel expert at Chatham House. “There are some very big challenges: The fact that it is landlocked makes it difficult to produce certain goods competitively. Financial resources [are] inconsistent or uneven, and oil prices have been either depressed or volatile in recent years. ”

Dialogue “difficult but not impossible”

It remains to be seen whether Chad’s military council will pave the way for a democratic governance model. In response to the protests on Tuesday, Mahomet Deby promised an “inclusive national dialogue”, although Chad’s constitution and parliament remain closed. The previous day, he had appointed civilian politician Albert Pahimi Padacke as prime minister – but opposition figures wept foul, arguing that Deby had no right to elect a prime minister.

“But that does not mean it is impossible,” he continued. “It may be that if Mahomet Deby and other military elements come to the conclusion that the old system can not be easily maintained in the absence of Idriss Deby – who had a great personality that his son seems to lack – they will be prepared to show genuine movement. ”

“France was obviously very close to Idriss Deby,” Melly said. “But it would be a mistake to automatically assume that France believes that the best way to maintain stability in Chad is to facilitate the continuation of authoritarian rule largely based on the military led by Mahomet Deby after a short transition period,” Melly added.

He noted that – while much attention was focused on Macron’s presence at Idriss Deby’s funeral, France played an important role in creating a behind – the – scenes dialogue when regional leaders gathered for the ceremony. The presidents of Niger and Mauritania spoke to a wide range of Chadian people while in N’Djamena for the funeral, with France “positioning itself as the guarantor of these efforts”.