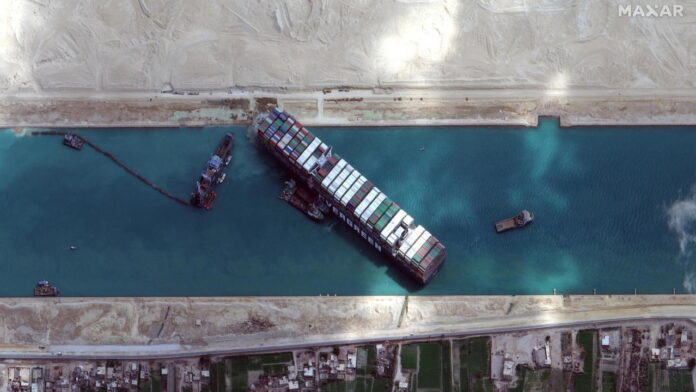 A video published on Facebook early Monday showed the stern of the container ship that had got stuck in the Suez Canal, which turned towards the canal bank and opened space in the canal.

The video showed tugs moving around the Ever Given container ship and voices were heard shouting in celebration.

This came after a canal service company said that salvage teams had “partially returned” the colossal container ship, without giving further details about when the ship would be released.

Leth Agencies said early Monday that the modest breakthrough came after intense efforts to shoot and tow the ship with 10 tugboats and suck up sand with several dredgers at spring water. The company said it was awaiting confirmation of the return from the Suez Canal Authority.

Satellite data from MarineTraffic.com showed the ship in the same position, surrounded by a squadron of tugs with its bow stuck in the eastern shore of the canal.

The skyscraper size Ever Ever got stuck in the Suez Canal last Tuesday and has kept up $ 9 billion in global trade every day, causing disruption to the vital waterway. Hundreds of ships already remained in the canal waiting to pass, carrying everything from crude oil to cattle. Over two dozen ships have chosen the alternative route between Asia and Europe around the Cape of Good Hope, which has added two weeks of travel and threatened delivery delays.