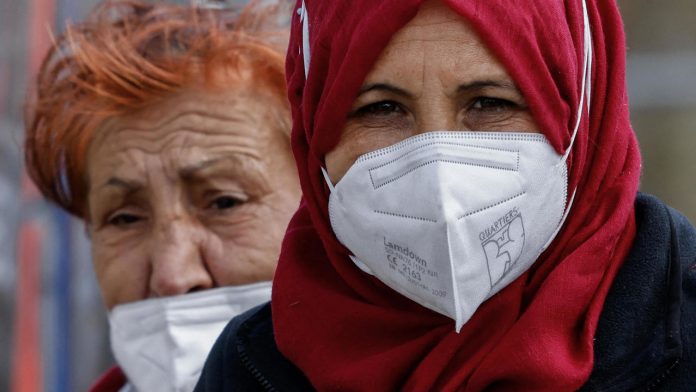 Governments put women and girls at greater risk for the health and socio-economic effects of the coronavirus pandemic, two global studies released on Wednesday show, urging leaders to prioritize gender equality in their response to the health crisis.

Two studies, one from a global research collaboration led by the Global Health 50/50 Project in London and one by the Center for Global Development (CGD) in Washington, were released on Wednesday to coincide with World Health Day, highlighting major shortcomings from national governments to consider gender or gender in its Covid-19 policy.

Since the pandemic began in March 2020, several studies have pointed to the disproportionate effect of the pandemic on women.

Many women have borne a heavier burden of taking on more unpaid work as healthcare professionals, while an overwhelming number have frontline healthcare roles and other jobs classified as “essential” such as education, cleaning and household services, as well as consumer-oriented jobs that potentially increase the risk of exposure to the virus.

“What we have is a complete disregard for inequality in these policy responses,” said Professor Sarah Hawkes, co-director of the Global Health 50/50 Project, about how governments have handled the gender pandemic.

Sex, Gender and the Covid-19 Health Policy Portal, a global collaboration between the Global Health 50/50 Project, the African Population and Health Research Center and the International Center for Research in Women in India, tracked 192 countries and reviewed health ministry websites from 76 countries part of their latest research on gender and Covid-19. They reviewed the government’s health policy based on six key areas according to the WHO’s recommendations on pandemic responses: vaccination, public health messages, clinical management, protection of healthcare professionals, disease surveillance and maintenance of important health services. They found that 91 percent of Covid-19’s health policies did not refer to gender.

This is despite the WHO repeatedly urging governments to ensure that their Covid-19 health policy is gender responsive. Only four countries – Canada, Bangladesh, South Sudan and India – approved designs and reported policies for three of the six key areas. Scandinavian and northern European countries, which are known for considering gender in the policy areas and were expected to do well, were ranked relatively poorly.

Professor Hawkes says that health and medical systems have historically been gender blind, but the pandemic has exacerbated inequality. Seeing the pandemic’s effect on gender can lead to a much better understanding of vaccination attitudes and to more effective public announcements on Covid-19.

“If you only have a policy that says everyone has to be vaccinated but do not take into account why women may hesitate about vaccination, you will see it reflected in data such as women of a certain age likely to be undervaccinated,” said Professor Hawkes.

“If you are administering a vaccine that has not been tested on pregnant women, it is not surprising to see that these women may be hesitant about vaccination.”

Women and girls in lower-income countries have borne the brunt of the Covid-19 crisis, according to new research from the Center for Global Development. CGD has analyzed more than 400 global studies released since the pandemic began.

Unlike previous crises where men’s employment was usually in jeopardy, early evidence of the pandemic has shown an excessive impact on women’s employment, working hours and wages relative to men’s. More women than men lost their jobs and women-run companies were forced to close at higher prices.

Overall, the CGD data have shown that women have different experiences of the pandemic. Apart from the higher proportion of domestic violence, which has been well documented, more women have dealt with poorer mental health – higher proportions of depression, anxiety, stress and fear – than men. And in some countries, access to sexual and reproductive health has declined.

“What was anecdotal is now increasingly supported by rigorous data and evidence: Women have been disproportionately harmed by the Covid-19 pandemic – whether it’s their business, their income or their own safety and security,” says Megan O ‘. Donnell, who heads the Center for Global Development’s Covid-19 Gender and Development Initiative.

The CGD, like the GH 50/50 project, also evaluated how well national governments had performed in response to the pandemic and found that so far less than 20% of economic relief and recovery policies have been designed to meet women’s needs.

The role of gender

As with previous pandemics, there is evidence that the effects of Covid-19 have been exacerbated by social attitudes towards gender, but there is also the role of biological gender to consider and how biological differences have led to different health effects. Professor Hawkes said that there are clear differences in male and female immune system responses to viruses that may explain higher ICU assumptions for men than women in general, but that social attitudes towards gender and not biological gender in some countries may account for the difference.

“Patterns about who seeks health care are very gendered, and when you are in health care, it depends on whether you are a man or a woman,” says Professor Hawkes.

She cites data showing that the proportion of ICU intakes for men is twice as high as for women in some countries.

“Part of this may be due to gender in countries where you have to pay for admission to an ICU,” she said. Is it the case that families just do not pay for women to be admitted to the ICU? We just do not know; the studies have not been done. ”

Regardless of the reasons for these differences, ignoring gender and gender can have enormous consequences for pandemic planning, recovery, and ongoing vaccination programs.

According to UN estimates, another 47 million women and girls will end up in extreme poverty due to the global health crisis and the poverty rate will not return to pre-pandemic levels until 2030.

To try to address some of the gender differences, CGD researchers have made a number of recommendations including cash transfers; work programs to reduce and redistribute the unpaid care work that women do; improve data collection; and monitor the everyday realities of women and girls to tailor Covid-19 strategies and recovery measures. Last but not least, CGD requires more women to take on leadership and decision-making.

Researchers from both the CGD and the GH 50/50 project agree that the government must do more to reverse “gender blindness”.

“Gender differences will not go away with the distribution of vaccines,” said CGD lead researcher Megan O’Donnell. “Covid-19 has exacerbated long-standing gender differences, and – if governments do not act – they can have far-reaching negative consequences for women’s health and economic status for decades.”