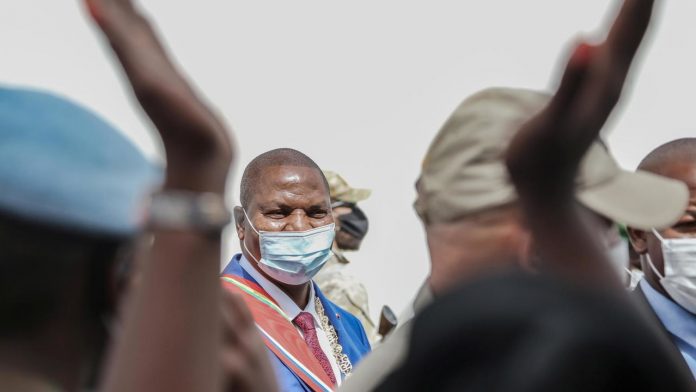 The most powerful of the Central African Republic’s armed groups said in a statement on Monday that they would end a rebel coalition aimed at abolishing President Faustin Archange Touadera.

The Central African Peace Unit (UPC), mainly active in the east of the country, “commits to withdraw from the Coalition of Patriots for Change” (CPC), wrote the group’s leader Ali Darassa.

The coalition is an alliance of some of the war-torn country’s most powerful armed groups, which united on December 19 and accused Touadera, the front-runner in the December 27 election, of trying to fix the vote.

Its components came from militia groups that together controlled two-thirds of the poor country.

Touadera was re-elected with just under one in three voters who could vote because rebel groups control most of the country.

Darassa said on Monday that since “the election crisis, the population has suffered terribly from insecurity, health, famine and the lack of humanitarian aid.”

The UPC, the statement continued, “reiterates its commitment to the Khartoum Agreement Process”, a peace agreement signed in February 2019 between the government and 14 armed groups.

Tensions have been high in the Central African Republic since the December elections, although the rise in violence in recent months is just the latest blow in a civil war that has been going on for eight years since President Francois Bozize was ousted.

More than 30,000 people have fled the country due to the violence surrounding the election, says the UN, while tens of thousands more have been internally displaced.

On January 13, rebels launched twin attacks on the outskirts of the capital – the first time they have struck so close to the city since their offensive began.

But their offensive grounded in front of government forces backed by 12,000 UN peacekeepers, Russian paramilitaries and Rwandan troops.

Since January, the government and its allies have recaptured cities once held by militants from the militia alliance.

Bangui has accused Bozize, now the head of the CPC, of ​​attempting a coup.

The UPC announcement came just days after another powerful group in the CPC announced that its leader had died of wounds suffered during an attack, in another blow to the rebel alliance.

Abass, whose real name was Bi Sidi Souleymane, died at a hospital in the north of the country, 3R said in a statement, adding that he had been “seriously injured” during attacks in the town of Bossembele on 16 November.

The 3R group consists largely of the Fulani ethnic group, whose members are traditionally nomadic shepherds.

Abbas’ group has previously been accused of war crimes, and legal sources said he had been the target of an investigation by the country’s special criminal court set up to investigate serious human rights violations committed since 2003.

CAR has been mineral-rich but ranked as the world’s second poorest country on the Human Development Index and has been chronically unstable since independence 60 years ago.