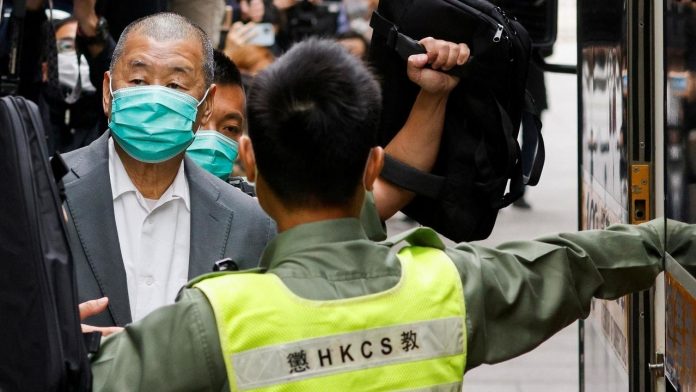 Hong Kong media icon Jimmy Lai was jailed for 12 months on Friday for helping lead one of the city’s biggest protests ever. He was one of several leading activists convicted, including Hong Kong’s so-called “father of democracy” Martin Lee.

They were found guilty earlier this month of organizing and participating in a massive protest in August 2019, in which an estimated 1.7 million people marched in opposition to a bill that would have allowed extradited suspects to China for trial. The protest was not approved by the police.

Their convictions and sentencing were the latest blow to the city’s flagging democracy movement, amid ongoing actions by Beijing and Hong Kong authorities over disagreement in the semi-autonomous Chinese city.

Lai, the founder of Hong Kong’s Apple Daily tabloid, was sentenced to 12 months in prison for unauthorized assembly. He was later given another 14 years for a separate unauthorized parish case.

Before being convicted, he was jailed on other charges, including collaborating with foreign forces to intervene in the city’s affairs – a new crime under a national security law imposed on the city by 2020 by the central government in Beijing.

Lee, an 82-year-old lawyer and former legislator known for his advocate for human rights and democracy in the city, had his sentence of 11 months in prison lifted after his age was taken into account.

Their convictions were the latest blow to the city’s flagging democracy movement, amid ongoing actions by Beijing and Hong Kong authorities over disagreement in the semi-autonomous Chinese city.

Lai was taken to court earlier Friday in custody, where he is being held under Beijing’s new national security law.

Seven of the defendants who had previously pleaded guilty submitted their mitigation on Friday morning.

“There is no right that is as valuable to the people of Hong Kong as freedom of speech and freedom of peaceful assembly,” said Ng, who released his legal team and gave his statement in person.

She added that she was prepared to stand up and stand up for the people who “must ultimately give collective expression to their anxiety and call on the government to respond”.

“I stand as the law’s good servant but the people’s first,” said Ng, whose speech ended with a loud applause in the courtroom.

Judge Amanda Woodcock said earlier in her verdict that the march had caused serious traffic disruptions and that it was peaceful was no defense.

“I am ready for the verdict and I am proud to be able to join the HK people on this path to democracy,” former lawmaker Lee Cheuk-yan said outside court before the hearing.

“We will walk together through the storm even in the dark.”

Under Hong Kong’s controversial new security law, the city’s residents can be held legally responsible for any speeches that oppose the Chinese government and the ruling Communist Party or are perceived to be collaborating with hostile foreign political groups or individuals. Election changes mean that only 20 of the 90 members of the Legislative Council will be elected directly and Beijing will retain even tighter control over the body that elects Hong Kong’s future executives.