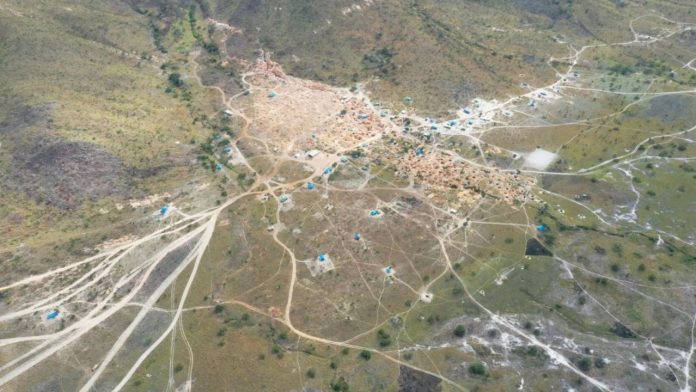 A group of domestic leaders in Brazil are sounding the alarm about the widespread illegal mining that is taking place in the country’s domestic territory, which is documented in aerial photos showing large mining camps on their land. Although Brazilian President Jair Bolsonaro is trying to open up domestic countries to mining, the communities and their leaders are fighting against this invasion and destruction.

The indigenous territory of Raposa Serra do Sol stretches over 1.7 million hectares in the state of Roraima in northern Brazil, bordering Venezuela and Guyana. Raposa Serra do Sol, founded in 2005, is home to a community of almost 20,000 indigenous peoples. It is also home to large deposits of gold, diamonds, uranium and other minerals.

Historically, Brazilian law has banned all mining in domestic territories. But when President Jair Bolsonaro took office in early 2019, things changed: his administration is keen to harness the resources of these territories. In February 2020, the President presented a draft bill to Congress that would allow mining and other commercial activities in domestic territories and promised that indigenous peoples would benefit from this economic activity.

Although the bill is still pending, activists say the promise of imminent legalization has intensified the climb for gold and increased illegal entry into protected territories. On March 3, the Roraima Indigenous Council (CIR) took to social media to condemn this ongoing invasion, with photos as evidence.

These photos show huts covered with blue tarp near Raposa II, which is located in the municipality of Normandia. According to the CIR, which brought this issue to the attention of the UN, the zone has been turned into a favela where almost a thousand miners live in desperate conditions.

This video, which CIR sent to our team, shows the large camp where miners live near Raposa II in the Raposa Serra do Sol territory. The photo was taken in February 2021. Credit: CIR.

Edinho Batista de Souza is the coordinator of CIR. He says the number of illegal miners in Raposa Serra do Sol has increased over the past three years:

These “garimpeiros” [Editor’s note: “wildcat” or illegal miners] comes from all over the world – from Roraima, from other states and even from other countries because we are a border region.

When the number of illegal miners swelled up to 2000, two police operations were organized in March 2020. But these measures did not prevent new entries. Edinho Batista de Souza says the state government has made things worse:

In February, our own local government passed a law that would expand mining and allow the use of mercury to process gold. They did this because of the Brazilian government’s promises to miners.

The law is strategic because it does not actually mention the domestic areas, only the areas that belong to the state. But in reality, “garimpeiros” carry out all their illegal activities in the domestic areas. After the law was passed, the wave of illegal miners increased – it was as if they thought it had legalized these activities. We complained about the law to the UN and the Supreme Federal Court and had it repealed.

Demonstration on February 13 in Boa Vista against the law regulating the use and use of mercury in the State of Roraima. © Caique Souza / Conselho Indígena de Roraima (CIR) ‘Sanitary barriers’ set up to prevent entry during the pandemic

One of the CIR’s concerns is that local lakes and rivers will be contaminated with toxic products, such as mercury, which is often used to process gold. They say more than 30 machines used to crush rocks to extract ore were counted in just one river in the area. During this process, residual stones and mercury end up in the water.

Some of these miners have shared pictures of their activities on social media, without making any attempt to hide their destructive nature. In early April, a video showing garimpeiros digging up a riverbed in domestic territory belonging to the Yanomami people in Roraima circulated in Brazilian media.

Photo of the rapilla site at Raposa Serra do Sol, published in January on a Facebook group meeting Brazilian orpailleurs. © DR

This illegal entry into domestic territory also increases the risk of spreading Covid-19. In February 2021, four “sanitary barriers” were established around Raposa Serra do Sol.

Barriers such as this were created in several territories at the beginning of the pandemic in 2020 to prevent unauthorized people from entering, such as garimpeiros, as well as to prevent the entry of mining equipment and alcohol.

The CIR Coordinator is also concerned about another effect of this trend:

Some domestic farmers are affected by mining propaganda and are beginning to see it as the only option. These people defend the mining, defend the invasion and destroy their own home.

This changes the system of collective organization in societies and creates a dependence on the people who finance mining exploration. These people are in town – they are politicians, businessmen, salesmen. Not to mention what happens at mining sites – such as drugs, alcohol and prostitution.

The areas where the mining takes place are difficult to access and not at all controlled. Anyone who talks about what is happening there is threatened, sometimes with death. That’s why we take pictures from a distance when we document these websites.

Against this upheaval, we have also turned to social media to share information to show that mining is not the only way to earn a living, that there are other activities that allow you to maintain your dignity and freedom.

The CIR shared this post about seed donations in Yanomami indigenous communities “with the aim of sharing and promoting traditional seeds in communities and strengthening family farming”.

According to the BBC, gold was the second largest export from the state of Roraima in 2019 … even though there are no legal mines.

Illegal mining has become particularly out of control in land belonging to the Yanomami people. In June 2020, Yanomami launched an extensive campaign in both Brazil and abroad to ask for help and support in removing the nearly 20,000 illegal miners in their territory.

The Brazilian judiciary seems to be listening. A judge ruled on March 16 that all miners should be deported from Yanomami territories. In the verdict, he said that this activity could cause genocide. It is an encouraging victory for Edinho Batista de Souza, who hopes that operations to combat illegal mining will also be carried out in Raposa Serra do Sol.