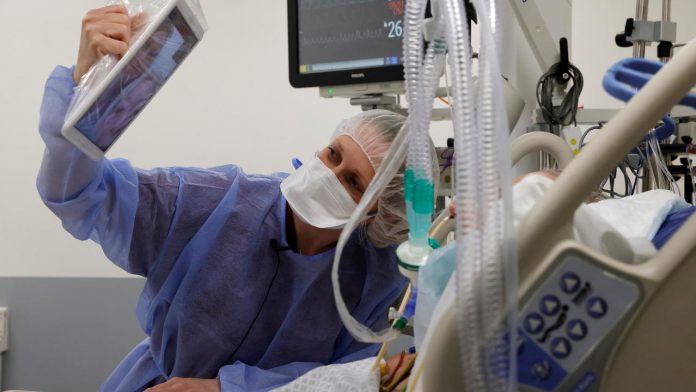 The number of Covid-19 patients in intensive care hospitals in France remained above 5,900 people on Wednesday, showing only a very small decrease, according to figures published by the country’s health authorities.

The number of people in intensive care decreased by 25 to 5,959 people as the pressure on the hospital system remained high. The figure has been close to the threshold of 5,900 in the last ten days, still far from the peak of the first wave in April 2020 (around 7,000).

The Ministry of Health reported 34,968 new cases of coronavirus, an increase of 4.36 percent compared to last Wednesday, in the lowest weekly week since mid-March when a third nationwide lockdown began to show some effect.

This year, the increases from week to week have only briefly fallen below the 4 percent level, in mid-February, and rose to more than 6 percent in late March-early April, before the government ordered the third shutdown just over two weeks ago.

The new cases took a total of 5.37 million. The government also reported 313 new deaths in hospitals, bringing the cumulative fee to 101,881, according to data from the Ministry of Health.

The number of people in hospital with the disease decreased by 132 to 30,954 but remained well above the 30,000 level, where it has been since the start of the third lock on 6 April.

The government said earlier on Wednesday that domestic travel restrictions imposed to address the spread of the virus are expected to be lifted on May 3, saying it stuck to a basic scenario where bars and restaurants are allowed to open outdoors in mid-May.

( Jowhar with REUTERS and AFP)