Home WORLD NEWS In the eyes of the international community, this voice is ‘already contaminated’
Facebook
Twitter
WhatsApp
Linkedin
LINE 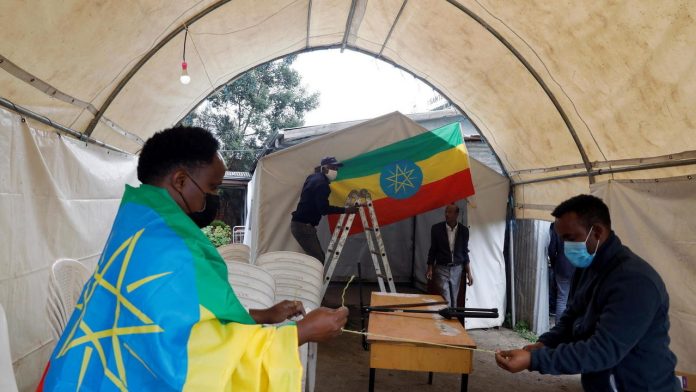 Ethiopians will vote in general elections Monday, with Prime Minister Abiy Ahmed seeking a popular mandate after his rise to power in 2018 ended decades of authoritarian rule. But while Abiy’s victory is considered likely, the international community is unlikely to view the election as legitimate amid voting delays, ongoing violence in Tigray and a boycott by some opposition parties. Jowharspoke with William Davison, an Ethiopian expert with the International Crisis Group.

Abiy was initially celebrated abroad, winning the 2019 Nobel Peace Prize for ending two decades of hostilities between Ethiopia and Eritrea, shortly after taking charge of his country’s ruling coalition the year before. He revoked the ban on opposition parties and released thousands of political prisoners.

Now Abiy is the subject of increasing international criticism for alleged rights violations in the Tigray conflict – with journalists and opposition figures saying he is curtailing the freedoms he once championed.

Jowhardiscussed the June 21 elections with William Davison, an Ethiopian expert with the International Crisis Group. He said Abiy is likely to win, but that — with a boycott by several opposition parties and a vote postponed in 110 of Ethiopia’s 547 constituencies, including Tigray, for security reasons — the polls will not legitimize his rule in the eyes of international observers. .

Why are the elections now being held after being postponed from their original August 2020 date?

The original decision was to postpone them due to the pandemic and the ruling was that the relevant government agencies would assess when the health status was safe to resume election preparations. A schedule was drawn up for the elections to be held between nine and 12 months after the pandemic was deemed sufficiently under control.

The authorities had an original June 5 date for the postponed elections. But due to various logistical and security issues, they have moved the date from June 5 to June 21.

How likely is Abiy to get the mandate he seeks in these elections?

Obviously you need at least 50 percent + 1 of those constituencies to form a government, and it seems very likely that the ruling party will achieve that despite the various issues. There are several reasons why that is the case. If you look at the situation in Oromia – the most populous region of Ethiopia and therefore has the most federal parliament constituencies, 178 – because of the political conditions there, there is increasing violence in the form of an insurgency. But there is also a lack of electoral competition against the ruling party, as the two main opposition parties boycotted the elections, saying the conditions were unfair and they were repressed, including the arrest of leaders and activists.

Even though popular support for Abiy in Oromia has declined, because of those electoral conditions – the lack of competing opposition parties – the ruling party will win a large number of those 178 seats almost by default. So you can see there is a pretty easy path to a majority for the ruling Prosperity Party.

I think it is clear that this election is already tarnished in the eyes of the international community. There is the civil war in Tigray and the resulting lack of elections there, as well as the situation in Oromia, and the insecurity elsewhere – particularly in the Benishangul-Gumuz region – is preventing polls from taking place.

Then there are other security issues elsewhere and some logistical issues – some related to security, but also just things like misprinted ballots – meaning some constituencies won’t vote until September.

All these factors together form a process that is really not credible in the eyes of the international community. It will not be an election that meets international standards. The EU is not even sending an observation mission because they could not agree on aspects of the mandate with the government.

As far as the legitimacy of the people is concerned, those who support the Prime Minister and those from opposition parties who are still running in the elections will see this as a legitimate process and therefore will regard the subsequently formed government as legitimate – assuming there are no significant opposition complaints are about the process of voting and counting itself. It will be legitimate in their eyes, but for all parties and their supporters not participating in the elections – and of course the electorate in Tigray – they will see this as a farce of a democratic process.

What impact could the conflict there have on Monday’s election, other than no voting in Tigray?

The fact that there are no elections and there is no civil war shows how bad the situation is in general, but it will not directly affect the rest of the elections. It raises security concerns about the election, but there are reasons for heightened security other than the ongoing conflict in Tigray.

However, there are some political consequences of the conflict. I think the prime minister has gained momentum in some quarters by taking the fight to the TPLF (Tigray People’s Liberation Front), an unpopular party in the rest of Ethiopia. I think that is particularly the case in the Amhara region, where there has been particularly vitriolic opposition to the TPLF.

It is well known that the war was quite popular, especially in the beginning; that the reasons the government gave for the war and the narrative they created—including that the TPLF “attacked our soldiers in their sleep”—has been quite successful in mobilizing public support for the war. More broadly, being seen as a strong wartime leader is something that will have boosted Abiy’s reputation among some sections of the Ethiopian electorate.