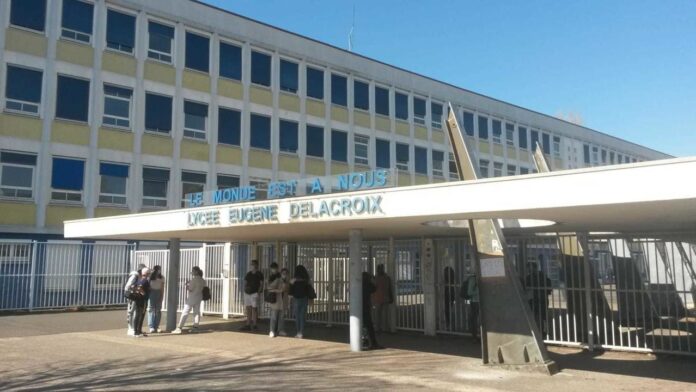 Twenty students have lost a parent to Covid-19 in a single school on the outskirts of Paris, underlining the health crisis in the French capital’s neglected suburbs and putting pressure on a government that has been proud to keep schools open at all costs.

Fatimata is worried about TV cameras and satellite dishes stationed outside her high school in Drancy, a northeastern suburb of Paris.

In fact, it is quite “stylé” (cool), says the 15-year-old student and leans against the perimeter of the iron and concrete in the Lycée Eugène Delacroix.

The day is coming to an end and yet Fatimata and her friend Basmala have spent only two hours in class. Under different circumstances, the girls may have enjoyed their free time. But right now it’s a concern.

“More and more teachers are arriving sick and not being replaced,” says Fatimata. “We are already weeks after the program and it is only getting worse.”

The school fence can keep the cameras in check, but Delacroix is ​​already located from the inside. In recent weeks, the coronavirus has spread like wildfire through the school’s narrow corridors and unopened classrooms, infecting staff, students and their parents.

A sign outside the entrance to the Lycée Delacroix. © Benjamin Dodman, FRANCE 24

The high school situation has become a symbol of an increasingly heated debate about the benefits of France’s “open schools” policy, which the government has steadily defended even as infections increase in several regions, including this one, driven by the so-called UK variant of the virus.

“To stick to a political decision, the government is effectively agreeing to let the virus drain the school piece by piece,” said a history teacher outside the high school, new from an interview in Italian with the local correspondent for Italy’s La Stampa.

The teacher, who declines to be appointed, is among 30 employees who have taken down tools that cite the threat to their and students’ health. About twenty other colleagues have been infected since the beginning of March, which means that the list of missing teachers on the school’s bulletin board is getting longer every day.

“The longer the list, the less the writing will be,” says Eric Finot, a French literature teacher who has joined the protest movement. “Now you have to squint to find out the names.”

‘The government does not care’

When Finot joined the school twenty years ago, Delacroix had its own doctor and two nurses. Now there is only one full-time nurse and another working part-time, looking after 2,400 students in a district plagued by the third wave of coronavirus.

Lycée Delacroix has been forced to close a quarter of its classes after each reported at least one case of Covid-19, in line with improved sanitation protocols applied to high-risk regions such as this. In recent weeks, the virus has also infected the school’s two deputy principals and forced two-thirds of assistant teachers to self-isolate.

One figure has drawn special scrutiny: a staggering 20 students have lost a parent to the virus since the pandemic began, a gloomy speech that explains why the cameras are here.

Although there is no evidence to suggest that these deaths were linked to infections at school, “the figure is in some ways an ominous reminder of the vulnerability of local people,” said Aline Cottereau, another of the protesting teachers.

Last week, Cottereau and her colleagues wrote a letter to President Emmanuel Macron condemning the “alarming” medical and sanitary situation at the high school. They called for an immediate closure of the school and a temporary transition to full-time homeschooling – a request that was soon repeated by several politicians, doctors and colleagues in the wider Seine-Saint-Denis area around Drancy.

Literature teacher Eric Finot reads a letter from the rectorate informing him that he must return to work or face a pay cut. © Benjamin Dodman, FRANCE 24

The poorest department on the French mainland, the Seine-Saint-Denis, commonly called the quatre-ving-treize or neuf trois, after its administrative number, has been hit particularly hard by the successive waves of the pandemic. With almost 800 cases per 100,000 inhabitants, more than twice the national average, this is again the area where Covid-19 is spreading the fastest.

While many people in Paris and other affluent areas have switched to working from home, the capital’s poorer suburbs have provided most of the frontline workers who keep the metropolis afloat. The combination of cramped neighborhoods and a shortage of doctors has also left the local population particularly vulnerable.

“The pandemic has only exacerbated existing inequalities,” said Marie-Hélène Plard, head of a preschool in Saint-Denis, the department’s most populous commune, just north of Paris. “The lack of healthcare facilities in the Treize neighborhood is affecting everyone, including schools,” she explains.

Plard says the number of cases reported in schools often underestimates the true extent of infections, with parents coming “under tremendous pressure not to report positive cases, leading to them being caught at home with their children and possibly jeopardizing their jobs.”

Like other school principals, Plard spends much of her time on juggling classes when she climbs to replace staff who are infected or isolated. She deplores the government’s failure to introduce systematic tests and notes that social distancing measures are particularly difficult to implement in preschools and primary schools. Similarly, her repeated requests to replace fixed windows and install air purifiers have gone unanswered.

“We always agreed that it was best to keep the schools open rather than leaving the children at home, but we should have prepared for this,” she says. “Instead, schools are kept open at all costs – even without teachers. The government does not care what happens inside. ”

France has been very proud to keep schools open much longer than any other country in the European Union, an award that Education Minister Jean-Michel Blanquer has hailed as a “French exception”. Teachers’ associations and medical experts have, however, expressed concern about how little officials have done to mitigate the spread of the virus, protect staff and ease their workload.

Mathieu Logothetis, a history teacher in Seine-Saint-Denis and a representative of the SNES-FSU trade union, says his organization’s repeated efforts to recruit more teachers and trainers, improve sanitation and increase testing have been overwhelming. He hopes the government will at least change its vaccination strategy, which has so far ruled out fast-tracking jabs for the country’s 900,000 teachers.

Under increasing pressure on the subject, Macron told reporters last week that he hoped targeted vaccination campaigns would be extended to teachers from April or May, even if he remained free.

“Teachers are on the front lines of the pandemic, but they are not protected,” says Logothetis. “The government seems to be happy to turn schools into nurseries as long as it helps keep the economy afloat.”

This is a view shared by Coleen Brown, an English teacher at Lycée Delacroix, who is exposed to the risk of staff and student health “purely for financial reasons”.

Brown is appalled to see her colleagues in the United States vaccinated even before schools reopen, while France does not yet offer teachers a jab. She is also shocked by the insufficient measures taken to protect school staff.

English teacher Colleen Brown says that the French insist on keeping schools open at all costs and without adequate protection, means that the health of teachers and students is endangered pic.twitter.com/LebsvVnfm5

“Social distancing is impossible, there are not enough cleaners, we do not have gel everywhere and many windows cannot even be opened,” she says. “This would not be accepted in a private school and would certainly not be accepted at the Ministry of Education.”

Do not pinch the guy

The anger and frustration expressed at Delacroix is ​​repeated across the Seine-Saint-Denis, with protesting teachers stopping work at a growing number of schools also affected by the virus. They include the Collège Claude Debussy in Aulnay-sous-Bois, the set of Olivier Babinet’s 2016 film “Swagger”, a vivid depiction of the untapped potential of some of the most run-down and ethnically diverse suburbs of Paris, so close to the capital and yet so far removed from the Republican promise of equal opportunities.

Finding the right balance between cultivating that potential and protecting teachers ‘and students’ health is a real dilemma for schools in Seine-Saint-Denis, says Justine Brax, an art teacher at the Lycée Alfred Costes in Bobigny, for which “closes schools in quatre-wing. -treize would be a disaster. “

Collège Claude Debussy, a middle school in Aulnay-sous-Bois, one of several facilities that have reported an alarming increase in infection. © Benjamin Dodman, FRANCE 24

Brax says she is fortunate to work in a spacious and functional environment, where sanitary measures are much easier to implement than in most other schools in the area. Her experience of homeschooling during France’s first shutdown a year ago has warned her against repeating the experiment at her vocational institute.

“Distance education just does not work for my students,” she explains. “Some do not have computers or have siblings to take care of, while their parents often cannot help. Many do not have the independence to work alone from home. Instead, they thrive when they work together in our workshops in high school. ”

Back at Delacroix, the possibility of returning to full-time distance learning causes similar problems among students already attending homeschooling.

While she tells her teachers that she has worked extra hard to balance online and classroom teaching, 17-year-old Sarah * is afraid that her class will end up too far behind if the school closes. In fact, she says, “we are already so far behind that I would not be surprised if they cancel graduation.”

At the same time, Sarah is worried about taking the virus home, while her mother recovers after the operation. That is the real priority, says her friend Joël, for whom health problems outweigh the rest. He adds: “If Macron does not close our school after all this, it really means he is not giving a shit.”