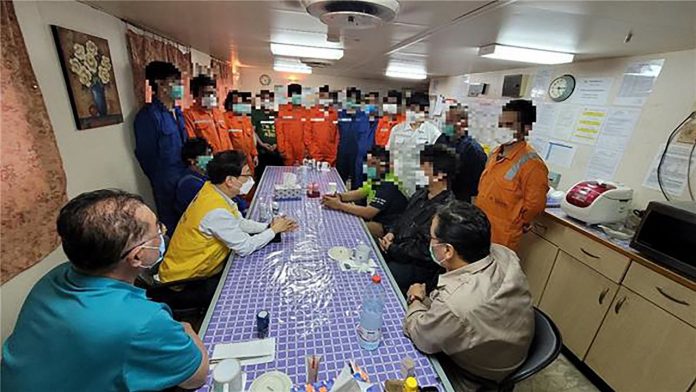 Iran on Friday released a South Korean-flagged tanker that it seized amid a dispute over billions in frozen oil funds, and the ship’s captain, the foreign ministry said in Seoul.

The Islamic Revolutionary Forces seized Hankuk Chemi and its multinational crew of 20 sailors in January, but South Korea’s foreign ministry said in a statement that its detention had been lifted and “the ship departed safely today.”

At the time of the seizure, Tehran said the ship was carrying 7,200 tonnes of “oil chemical products” and accused it of “repeated violations of maritime environmental laws”.

The move came after Tehran called on Seoul to release billions of dollars of Iranian assets frozen in South Korea under US sanctions over its nuclear program.

Tehran said in February that the entire crew except the captain would be allowed to leave the country as a humanitarian gesture, but most remained on board to maintain the ship.

That same month, Seoul said the two had agreed on a way forward to free up billions of dollars frozen from Iran’s oil sales – but that it was awaiting US approval.

Iran was a major oil supplier to resource-poor South Korea until Washington’s rules blocked purchases, and Tehran says it has a total of $ 7 billion in blocked funds in Seoul.

Tehran agreed on a multinational deal called the JCPOA to limit its nuclear program in exchange for sanctions aid in 2015, but the agreement was dissolved three years later when the United States withdrew under then-President Donald Trump.

New US President Joe Biden has signaled that he is ready to revive the agreement and negotiators began meeting this week in Vienna to try to put it back on track.

But Foreign Minister Antony Blinken last month signaled that Washington would oppose the release of funds blocked in South Korea unless the Islamic Republic returned to full compliance with the nuclear deal.

South Korea’s Foreign Ministry did not mention the money in its statement on Friday.

But several South Korean media reports say that Prime Minister Chung Sye-kyun will soon visit Tehran without specifying a date for the trip.

No one at the ship’s operator, DM shipping, was immediately available for comment.

Tehran has repeatedly denied that seizures of the ship were linked to the funds.

The Hankuk Chemi incident was the first seizure of a large ship by Iran’s naval forces in more than a year.

In July 2019, the guards arrested the British-flagged oil tanker Stena Impero in the Strait of Hormuz for stopping a fishing boat. They released it two months later.

At the time, it was widely seen as a tit-for-tat move after authorities in the British overseas territory of Gibraltar arrested an Iranian tanker and later released it despite US objections.

Tehran denied that the two cases were related.

The guards seized at least six other ships in 2019 due to alleged fuel smuggling.