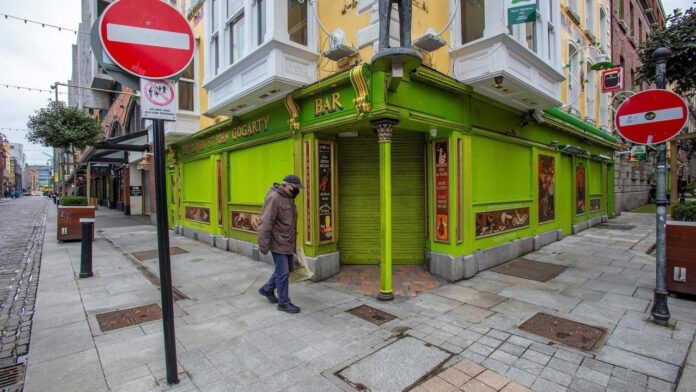 The basement of Temple Bar in central Dublin would normally be stacked with tall Guinness barrels to earn thousands of pints to partygoers who toasted Ireland’s patron saints.

But this St. Patrick’s Day on Wednesday, just a tad of empty chests lie along the chilled basement of the crimson pub, the cornerstone of the capital’s drinking district.

For the second year in a row, the usually unpleasant celebrations have been interrupted by curbs.

“It’s a year now and … we seem to be back where we started,” said customs officer Tom Cleary, perched on a bar stool next to a Guinness crane shaped like a Celtic harp.

“It is sad that there is no end in sight,” he told AFP. “I mean, will we be here next St. Patrick’s Day with the same problem?”

St Patrick’s Day is traditionally a bonanza trading day for interpreters across Ireland.

Huge crowds float into the city center on National Day, jamming pubs and spreading the streets in an alcohol-powered, shamrock-themed celebration of the Emerald Isle.

But the global state of health has stopped Ireland’s most emblematic industry.

The first case of Covid-19 was confirmed in Ireland on 29 February last year. The government asked all pubs to stop trading after March 15 – just 24 hours before “Paddy’s Day” 2020.

In the past year, 4,534 people have died after testing positive for coronavirus in Ireland – home to just 4.9 million – and the nation is currently in the middle of its third deadlock.

As the numbers weakened last year, pubs in some counties and those serving food were allowed open to short spells.

But the case escalated after the government lifted restrictions before Christmas, and in early January, Ireland was the most contagious nation in the world, according to Oxford University.

All pubs across the country have now been closed since Christmas Eve and the government said it is unlikely to reopen until mid-summer.

“We have endured the longest severe shutdown in Europe,” said Donall O’Keeffe, director of the Licensed Vintners Association, which represents pubs in Dublin.

“Once you’ve been closed for a year, every day is an eternity.”

In Ireland, pubs and pints have a semi-mysterious status and there are signs that drinkers have tried to recreate the magic at home during the pandemic.

Irish police have raided many “shebeens” – illegal unlicensed bars operating under the radar while the nation has been locked up.

Pictures from one show a frame shackle installation: a wooden bar with a single crane mounted under a corrugated metal roof.

But others are more convincing stand-ins for the real thing.

A raid on New Year’s Eve even had a pool table, a wood stove and an arcade machine up in the corner.

More generally, there are signs of discontent in Ireland as a third shutdown extends, with a sluggish vaccine rollout hampered by delivery issues across the EU.

Protesters fired fireworks at riot police who accused the crowd of pulling batons.

But the protest quickly developed from collisions with the police to a party atmosphere, with live music and drinking on the street.

Further protests are planned for Wednesday, fearing that the mood of merriment will be replaced by scenes of violence.

Police said “checkpoints will be in place on arterial roads into the city” with dog units, riot police, horse officers and a helicopter unit on standby.

Outside Temple Bar – which gives its name to Dublin’s famous “Temple Bar” drinking district – the cobbled streets are framed by deserted pubs.

Some have had their windows up for several months, settling for another year of muted St Patrick’s celebrations and a long shutdown with no end in sight.

“The atmosphere is gloomy,” said Martin Harte, head of the district consortium.

“I do not think anyone thinks we will open soon and people are … scared and insecure.”