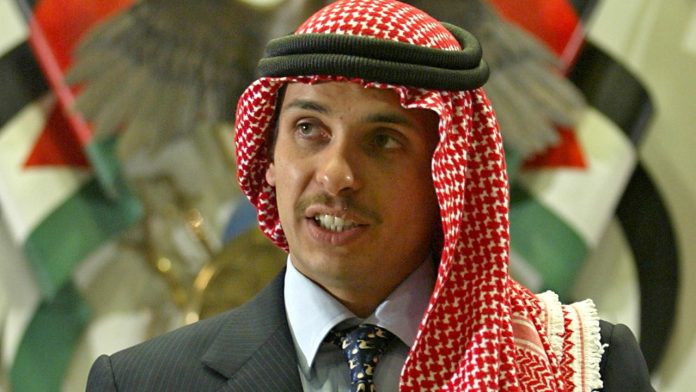 Jordan’s deputy prime minister on Sunday said the king’s half-brother, Prince Hamza, had been in contact with foreign elements over a plan to destabilize the country and had been under investigation for some time.

Ayman Safadi, who is also Jordan’s foreign minister, told reporters that the conspiracy had been annihilated at “zero hour”.

“Then it was clear that they were moving from design and planning to action,” Safadi said, adding that about 14 to 16 people have been arrested.

Safadi spoke a day after Prince Hamza, a half-brother of King Abdullah II, was placed under house arrest, in a rare public clash between top members of the long-ruling family.

The unparalleled event has raised concerns about stability in a country considered a significant Western ally in a volatile region and has drawn a major outburst of support for Abdullah.

In a filmed statement from house arrest, Hamza accused the country’s leadership of corruption and incompetence.

Safadi said intelligence services had been observing the plots for some time and had raised concerns with the king.

He said Hamza was being asked to “stop all these activities and movements that threaten Jordan and its stability”, but he refused.

Safadi did not identify the foreign countries alleged to be involved in the act. But he said a longtime senior official with business relations in several Arab Gulf states, Bassem Awadallah, was involved and had planned to leave the country. He also said that Awadallah had tried to secure a place for Hamzah’s wife to flee.

Labib Kamhawi, a Jordanian analyst, said Hamza had crossed a red line by indicating that he could be an alternative to the long-reigning king.

“This is something that the king does not accept or tolerate,” he told the AP. “That is why we are now witnessing what has happened. This file is now more or less closed. ”

Praying for truth and justice will prevail for all the innocent victims of this evil slander. God bless and keep them safe, ”she tweeted.

In his video, Hamza said he was visited early on Saturday by the UK military chief and told that he could not go out, communicate with people or meet them. He said that his telephone and internet service were cut off and that his satellite internet, which is used to record the message, was also turned off.

He said he was told he had been punished for attending meetings where the king had been criticized, although he said he was not accused of joining the criticism.

Hamza then attacked the “ruling system” without mentioning the king by name, saying that it had decided “that its personal interests, that its economic interests, that its corruption are more important than the lives and dignity and future of the 10 million people. lives here “.

He added: “I am not part of any conspiracy or smelly organization or foreign-backed group, which is always the statement here for anyone who speaks.”

Hamza, a popular actor in Jordan, was stripped of his title as Crown Prince in 2004, five years after Abdullah became king.

Adding to the embarrassment of the kingdom, his claims contradict the statements of the military chief, General Yousef Huneiti, and deny that Hamza was imprisoned or was under house arrest.

However, the rare and damaging mockery between royalty seemed to have little immediate effect on external support for Abdullah.

State Department spokesman Ned Price said: “King Abdullah is a key partner in the United States, and he has our full support.”

The state-run Saudi press agency said the kingdom’s royal court supported King Abdullah’s efforts “to maintain security and stability and discourage any attempt to influence them”.