Home WORLD NEWS Jordan’s Abdullah shows up with half-brother for the first time since the...
Facebook
Twitter
WhatsApp
Linkedin
LINE 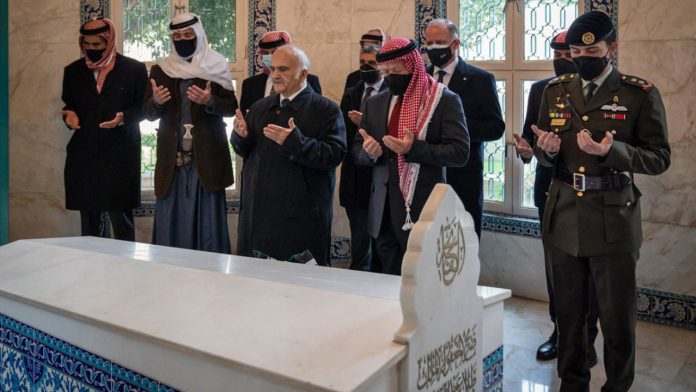 Jordan’s King Abdullah appeared in public on Sunday with his half-brother Prince Hamzah, state television showed, their first joint appearance since a palace crisis involving the prince shook the kingdom.

The pictures showed a group of Hashemite royalty at a mausoleum where their ancestors are buried.

All were dressed in civilian clothes, except Hussein, the heir to the throne, who wore military clothes.

The government had accused Hamzah – a former crown prince who resigned as heir to the throne in favor of Abdullah’s son Hussein in 2004 – of interfering in a conspiracy to “destabilize the kingdom’s security”.

At least 16 people were arrested.

But Abdullah said last Wednesday that Hamzah, who has signed a letter pledging his loyalty to the king after mediation by an uncle, was safe in his palace under his “protection”.

In an address that was read out in his name on state television, the king added that “rebellion has been buttoned up”.

Hamzah had been appointed crown prince and heir to the throne in 1999 in line with his father’s wishes, but Abdullah dismissed him in 2004 and appointed his own eldest son Hussein instead of Hamzah.

After claiming that he was placed under house arrest earlier this month, Hamzah used traditional and social media extensively to crack down on his situation.

He accused Jordan’s rulers of corruption and incompetence in a video released by the BBC on April 3.

But after a statement expressing his loyalty to the king two days later, Abdullah said last Wednesday that Hamzah had offered his support for the monarchy.