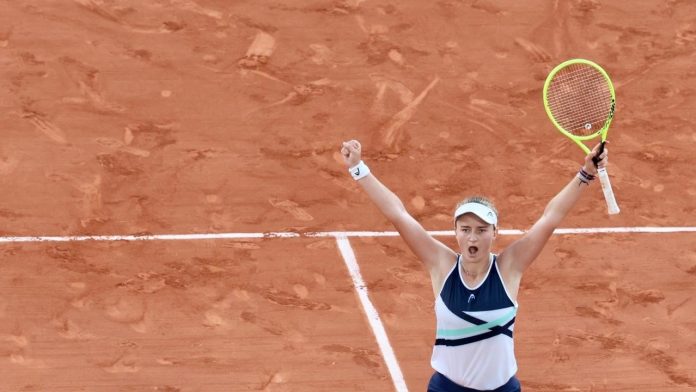 Anastasia Pavlyuchenkova will play Barbora Krejcikova for the French Open title after the Russian reached her first Grand Slam final on Thursday with a record try of 52, while the Czech saved a match point in a dramatic win over Maria Sakkari.

Pavlyuchenkova defeated the world No. 85 Tamara Zidansek of Slovenia 7-5, 6-3, with the unseeded Krejcikova fighting back from the rim to outlast Sakkari 7-5, 4-6, 9-7 after three hours and 18 minutes.

Pavlyuchenkova, a quarter-finalist in Paris ten years ago, became the first woman to play more than 50 majors before making her first final, taking the previous mark of 44 achieved by Roberta Vinci in second place at the US Open in 2015. , broke through.

“It’s been a long road. I had my own long special road. Everyone has different ways. I’m just happy to be in the final,” said 29-year-old Pavlyuchenkova, who made her Grand Slam debut at Wimbledon in 2007.

The 31st placed drop service in the opening game on a sun-filled Court Philippe Chatrier, but took advantage of a fourth break point against Zidansek to break back for 2-2.

But the Slovenian immediately broke back, rewarded for her perseverance and tireless defense.

Zidansek then set up two breakpoints at 5-5, but Pavlyuchenkova held on and the Russian struck the next game to finish the first set when her opponent committed a costly double foul.

Pavlyuchenkova carried that momentum into the second set and broke through with a 2-0 lead. Zidask reacted to get back on service, but was broken again when the Russian took a 4-1 lead.

Zidasek, two points away from a first round defeat here, continued to scrape hard and nerves resurfaced for Pavlyuchenkova as two double faults allowed the Slovenian to claw back to 4-3.

But Pavlyuchenkova would not be denied, as another break allowed her to serve for the match, with victory secured when Zidask fired wide.

“I’ve always wanted to play a game like this, a challenging game in which we both play so well. Even if I lost today, I am very proud of myself. Fighting, in life, that’s the most important thing,” Krejcikova said.

Both players got off to a nervous start to their first Grand Slam semi-final, with 17th-seeded Sakkari the first to hold the serve in the fourth game as she took a 3-1 lead.

But Krejcikova took the next four and took the lead 5-3 with a superb lob that brought her into the set.

The Czech was then broken to love when Sakkari rattled eight points in a row to a level of 5-5.

A routine grab from Krejcikova put the pressure back on Sakkari, who surrendered the set when her shot hit the net and drifted wide.

Sakkari, who beat runner-up Sofia Kenin and then reigning champion Iga Swiatek in the last two rounds last year, regrouped and took a 4-0 lead in the second.

The Greek fended off a spirited comeback from Krejcikova to force a decider, Sakkari broke for a 2-1 lead and saved a break point in the next game to consolidate as the finish drew closer and closer.

Sakkari had a match point at 5-3, but the resilient Krejcikova stayed alive with an overwhelming backhand volley, then broke back before moving up front 6-5.

Krejcikova saw three match points of her own pass at 7-6, Sakkari saved a pair with a cracking backhand winner and an ace.

Krejcikova again held relatively comfortably and brought in another match point on Sakkari’s service. A forehand from the Greek was long mentioned, but the chair umpire dramatically ignored — even when TV reruns showed the ball was out.

Rather than dwell on her apparent bad luck, Krejcikova brought in a fifth match point, which was converted after three hours and 18 minutes with a backhand winner down the line.

Rafael Nadal and Novak Djokovic face each other for the 58th time on Friday in a storied rivalry that began with their first-ever meeting in the 2006 quarter-finals at Roland Garros.

World number one Djokovic has the overall lead at 29-28, but Nadal has a 7-1 record in their French Open encounters and is 19-7 on clay against the Serbian.

Djokovic’s last win over the Spanish star on clay was in Rome five years ago.

One of those defeats, however, was at the hands of Djokovic in 2015.