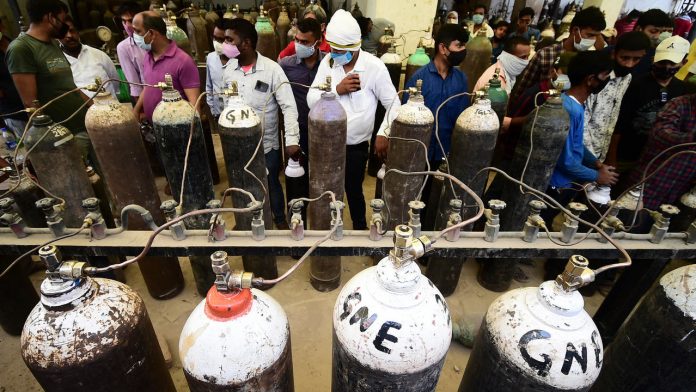 At least 24 patients with COVID-19 in western India died on Wednesday when the supply of oxygen to their ventilators stopped, amid a nationwide shortage of gas and an increase in infection.

Maharashtra State Health Minister Rajesh Tope confirmed the deaths at a Nashik city hospital and said the hospital’s oxygen supply had run out as a tanker refueling leaked. Oxygen barely ran throughout the country.

“The leak was seen at the tank that supplied oxygen to these patients. The interrupted supply can be linked to the patients’ deaths at the hospital, says Tope.

Hospitals in Delhi, the capital and elsewhere have warned that their deliveries of medical oxygen given to seriously ill COVID-19 patients are running out.

Max Healthcare, the largest private sector healthcare provider in Delhi and its suburbs, said some of its hospitals had less than two hours of oxygen supply.

Television showed pictures of people with empty oxygen cylinders crowding filling stations in the most populous state of Uttar Pradesh as they climbed to rescue affected relatives in hospital.

The situation was so serious that some people tried to loot an oxygen tanker and forced the authorities to increase security, according to the health minister in the northern state of Haryana.

India is now facing a “storm” of coronavirus that is overwhelming its health system, Prime Minister Narendra Modi said in a national address on Tuesday, adding that the authorities were working with states and private companies to deliver oxygen quickly.

Authorities in Maharashtra, which is already partially party-locked in, late Wednesday ordered further restrictions on the movement of people within the city and state until May 1 to limit the spread of the coronavirus.

According to the order, all offices, except those that provide important services, must work with 15% of staff. Travel by private vehicle is only allowed in medical emergencies, and only medical workers and government employees are allowed to drive the normally popular train system.

India, the world’s second most populous nation, reported 295,041 new coronavirus infections on Wednesday – the largest daily increase reported in any country – stretching its hospitals to a breaking point, officials said.

The United States alone had a slightly higher one-day rise of 297,430 cases in January, although its numbers have fallen sharply since then. India’s 2,023 deaths were also the highest in the pandemic.

The Serum Institute of India, which makes the AstraZeneca COVID-19 vaccine, said it would not be able to increase its monthly production to 100 million doses from the current 60 million-70 million by July, compared to its previous forecast at the end of May. .

The delay could slow India’s immunization drive, which the government has opened to all adults from next month to try to stop the deadly second wave.

Health experts said India had let down when the virus appeared to be under control during the winter, allowing for large gatherings such as weddings and festivals.

Modi himself is facing criticism for tackling packed political meetings for local elections and allowing a religious festival to continue where millions gathered.

India has so far administered almost 130 million doses of vaccine, most in the world after the United States and China but still small relative to the population of 1.35 billion people.

Vaccine doses have been short in many states, but vaccinations are currently limited to frontline workers and people over the age of 45.

On Wednesday, Germany warned its citizens in India that the health risk of staying in the country “increased” significantly due to lack of hospital beds.