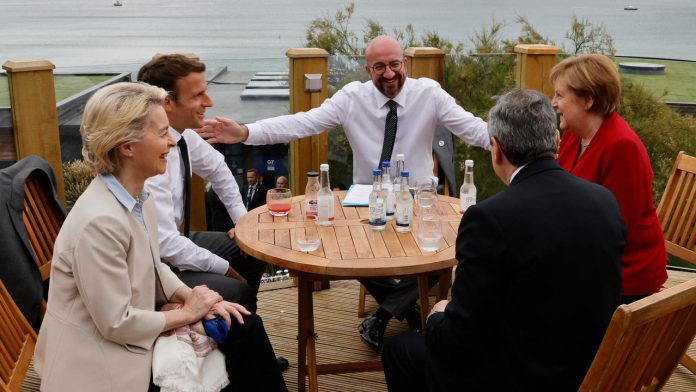 The mood was buzzing as G7 leaders gathered on Friday for their first face-to-face talks in nearly two years, with an expected pledge to donate a billion doses of vaccine against Covid to poor countries on the agenda in a show of Western democratic cohesion. .

The club of leading economies – Britain, Canada, France, Germany, Italy, Japan and the United States – say a concerted approach is the world’s best chance to recover from the global health crisis and tackle climate change.

President Joe Biden has set the tone by scrapping Donald Trump’s isolationist stance to deliver a message of determination from the G7 and NATO to both Beijing and Moscow as he takes his first seat in Geneva next week. with Russian President Vladimir Putin.

“The driving and inspiring goal of this G7 summit is to show that democracy can meet the greatest challenges we face in the world,” said a senior US government official.

Campaigners say the G7’s pledge for vaccine donations for this year and next – including 500 million US doses – is far too little, too late to end a pandemic that has claimed more than 3.7 million lives worldwide .

“If the best G7 leaders can manage to donate one billion doses of vaccine, this summit will have been a failure,” said Oxfam, urging the world to need 11 billion doses.

But the G7 has acknowledged it must engage in competitive “vaccine diplomacy” efforts launched by China and Russia, with the Biden administration stressing that it expects nothing in return for the donated shots.

The initiative “will embrace a transparent, climate-friendly and non-corrupt mechanism with high standards” for infrastructure investment in the developing world, the US official said.

“It will be an alternative to what other countries, including China, offer.”

In support of the US-led diplomatic revival, Biden and British Prime Minister Boris Johnson adopted a new “Atlantic Charter” on Thursday, modeled on the pact signed by their World War II predecessors to create a new world order. help build.

Johnson dislikes the decades-old phrase “special relationship”, arguing that it makes Britain submissive to Washington, and instead tells the BBC that it should be considered “indestructible”.

He also downplayed any disagreements with Biden over Britain’s troubled province of Northern Ireland ahead of Saturday’s confrontation talks between Johnson and EU chiefs to address deep rifts created by Brexit.

British Foreign Secretary Dominic Raab hit back on Friday after French President Emmanuel Macron launched a broad side over the UK’s kickback on special post-Brexit arrangements for Northern Ireland.

Raab told Sky News that “change has to come from the European Commission” and that “we are not negotiating or haggling over the integrity of the UK”.

By late Thursday, more than 3,000 pro-UK loyalists in Belfast protested the “protocol” that effectively keeps Northern Ireland within the EU’s customs union and internal market.

Marshmallows by the sea

Johnson hopes to lighten the mood at a beach barbecue on Saturday, along with his new wife Carrie and other G7 husbands, with a sailor’s song and roasted marshmallows around fire pits.

Protecting global biodiversity is another theme of the G7 this weekend, with leaders signing an agreement to protect at least 30 percent of land and oceans by 2030.

They will also debate helping poorer countries move away from fossil fuels, ahead of the UN’s COP26 climate summit in Scotland in November.

Like the G7, Britain wants COP26 to be held in person and announced that it plans to offer vaccinations to delegates from poorer countries if they cannot otherwise get it.

“We need to see action, not just warm words, to address the climate and wildlife emergency,” Rebecca Newsom, head of politics for the environmental group, told AFP.

“We need to see those tangible commitments this weekend — otherwise our world leaders will let us down,” she said.

The G7 is also expected to adopt a UK plan to send an additional 40 million girls to school by 2025, after the pandemic destroyed education opportunities for many around the world.

The leaders of the G7 will be joined this weekend by the leaders of Australia, South Africa, South Korea, the United Nations and the European Union, with India joining at a distance.

“This is a compelling agenda for global recovery, ambitious but achievable, provided we evoke the will and ingenuity,” Johnson said in an appeal to “related democracies.”