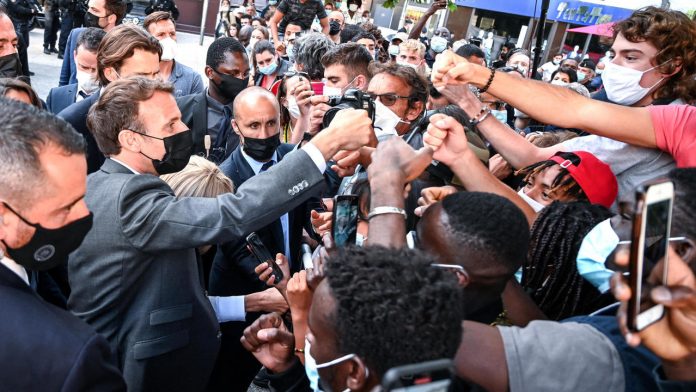 Tension is already in the air less than a year before the French presidential election. Just this week,

President Emmanuel Macron was punched in the face during a visit to the south and far-left arsonist Jean-Luc Mélenchon broadcast conspiracy theories in an impromptu blowout, prompting analysts to warn that the 2022 election campaign may already be a escalation going through extremist ideas and fiery language.

While visiting the small town of Tain-l’Hermitage in southeastern France on Tuesday, French President Emmanuel Macron approached a metal barricade to greet the gathered crowd and was suddenly punched in the face by a man shouting: “Montjoie Saint Dennis!” – a royalist battle cry dating back centuries – as well as “À bas la Macronie” (Down with Macronism).

The centrist president, who was quickly chased away by his security details, later dismissed the incident as a one-off incident committed by an “ultra-violent” individual.

Speaking on a political talk show, Jean-Luc Mélenchon, leader of the far-left La France Insoumise party and a perennial presidential candidate, curiously predicted that “in the last weeks of the presidential campaign, we will have a serious incident or a murder”, especially orchestrated to manipulate the electorate.

Mélenchon went on to say that the French presidential elections of April 2022 have already been “written in advance”, suggesting that Macron is the creation of a vague elite clique: “In every country of the world they have invented someone like him, who comes from the nothing and who is pushed by the oligarchy.”

This comes amid repeated rumors in recent months that ultra-conservative anti-immigration commentator Éric Zemmour – whose dismissive polemic Le Suicide Français sold 400,000 copies in 2014 and whose appearance on the 24-hour news channel C-News has boosted his ratings. given – before the president will run.

Zemmour, for his part, responded to the news of Macron’s blow by saying: “He got what he deserved.”

For many, the idea of ​​someone as controversial as Zemmour – who is either adored or loathed by large segments of the French population – campaigning to capture the Élysée Palace fueled fears of a tense campaign ahead. .

In late April, a group of ex-generals added to the grumpy atmosphere by writing an open letter, published in the ultra-conservative magazine Valeurs Actuelles, saying that if the French state doesn’t take action against “suburban hordes” — or residents of the mainly immigrant suburban neighborhoods – and other groups who “scorn our country” will see a “civil war” in France leading to “thousands of deaths”.

A month later, the same magazine published a similar letter involving younger, incumbent members of the military, who were told to resign and face sanctions before a military council.

“We can definitely see a bit of a wild campaign,” said Benjamin Morel, an expert on French politics at Paris II University.

But even before the 2022 presidential election, France will be holding two rounds of regional polls on June 20 and 27.

Party leaders have already launched their campaigns. Leader of the far-right Rassemblement National (formerly the National Front) Marine Le Pen was the first to travel through France to support her party’s regional candidates while polishing her own presidential image.

Mélenchon has also started campaigning, hosting the first meeting of his presidential campaign on May 16 in the former mining town of Aubin in the southern region of Occitanie.

Hence Macron’s travels to various French regions — a “secular pilgrimage,” as he called it, to “feel the pulse” of a country shaken by nearly a year and a half of pandemic — including the visit to the Southeast on which he was beaten. .

“The public debate has been hardened by these various incidents in recent weeks,” Benedetti said, adding that the Covid-19 crisis likely bears some responsibility for this.

“Last year people were locked up for months and there was already a sense of tension – and as we see the end of the nightmare there is a risk that people will become more uninhibited in a way that could amplify any violence.”

However, this wasn’t the first time French political leaders had been attacked or insulted: Conservative then-President Jacques Chirac was called a “bastard” (“bastard”) when he greeted a crowd on the French Riviera in 2001. Center-left former Prime Minister Manuel Valls was beaten while campaigning in the Socialist Party presidential election in 2017. That same year, conservative parliament candidate and former Paris mayoral candidate Nathalie Kosciusko-Morizet was forcibly pushed into a market in the French capital.

Mélenchon’s recent conspiracy musings weren’t the first time he’s sparked controversy either. A 2017 video of an outraged Mélenchon went viral when his home and party headquarters were raided as part of an anti-corruption investigation into the alleged misuse of European Parliament funds to pay party employees, with an outraged Mélenchon yelling at police: “I am a parliamentarian!” and “I am the Republic!”

As sociologist Michel Wievorka told FRANCE 24: “We know that Mélenchon is capable of much worse.”

Mélenchon’s latest diatribe comes on the back burner for him and for the French left in general. He won 19.6 percent of the vote in the first round of the 2017 presidential election, finishing fourth behind Macron, Le Pen and conservative Les Républicains candidate François Fillon.

Today, Mélenchon comes in Politico’s polls for the 2022 presidential race at just 11 percent. Le Pen tops with 28 percent, Macron is in second with 25 percent and Xavier Bertrand – head of the northern Hauts-de-France region and seen as the most likely conservative standard-bearer – follows in third with 14 percent. The mayor of Paris, Anne Hidalgo, the favorite to run for the Socialist Party, sits at just seven percent.

Many have commented that while Macron campaigned as a centrist, with his newly formed party La République en marche, he increasingly ruled from the right. But opinion polls show that the center itself has shifted to the right for much of the French electorate during its tenure, particularly on security and immigration.

In recent decades, such a turn of events would, of course, have benefited the French conservative parties, many of whom are descended from the post-war politics of Charles de Gaulle, leader of the Free French Forces during World War II and founder of the Fifth Republic – and both a staunch anti-fascist and a staunch conservative.

The party revamped by Nicolas Sarkozy and renamed Les Républicains is now the mainstay of France’s centre-right party. But both Macron’s rapid advance and Le Pen’s slow, steady rise have driven France’s traditional right-wing and left-wing parties to the periphery in 2017.

“The traditional parties have always had a calming effect on political discourse in France,” Morel noted.

“The weakening of the traditional parties encourages the extremes, because in that void political candidates feel the need to cross borders if they want to gain traction,” he said. This is in favor of the far right, he said, as voters realize they hold “more radical” views than the candidates they voted for.

At the same time, Morel said, “social media and 24-hour news channels (such as Zemmour’s platform C-News) have not helped, as their audience demand favors eye-catching and thus provocative content”.

In this context, it is not surprising that reactionary provocateurs such as Zemmour have come to the fore in French public life.

The 2022 presidential campaign is likely to see an “escalation” from the far right if he decides to flee, Morel said, predicting that even Le Pen will feel the need to “use more radical language”.