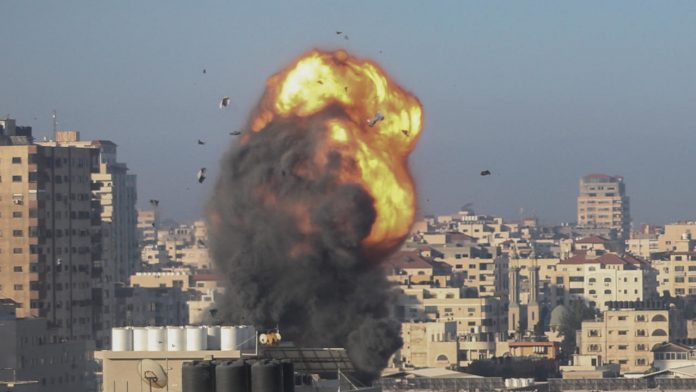 Israeli planes renewed the airstrikes in Gaza early Saturday and Hamas militants responded by firing rockets at Israel as their fight went into a fifth night and US and Arab diplomats sought an end to the violence.

An Israeli airstrike in Gaza City killed at least 10 Palestinians, mostly children, in the deadliest single attack since fighting against militant Hamas rulers in Gaza earlier this week.

The Palestinian Ministry of Religious Affairs said Israeli planes destroyed a mosque. A military spokesman said the military was checking the report.

There were also widespread Palestinian protests in the occupied West Bank on Friday, where Israeli forces shot and killed 11 people.

The growing violence has raised fears of a new Palestinian “intifada,” or uprising at a time when there have been no peace talks for years.

Palestinians would celebrate Nakba Day (Catastrophe) on Saturday, as they commemorate the estimated 700,000 people who fled or were expelled from their homes in what is now Israel during the 1948 war surrounding its creation. That caused even more unrest.

At least 132 people, including 32 children and 21 women, and 950 others have been injured in Gaza since Monday, Palestinian medical officials said.

Early on Saturday, an air raid on a three-story house in a Gaza City refugee camp killed eight children and two women from an extended family.

Mohammed Abu Hatab told reporters that his wife and five children had gone to celebrate the Eid al-Fitr holiday with relatives. She and three of the children aged 6 to 14 were killed, while an 11-year-old is missing. His 5 month old son Omar is known to have survived.

“There was no warning,” said Jamal Al-Naji, a neighbor who lived in the same building. “You filmed people eating and then you bombed them?” he said to Israel. “Why are you confronting us? Face the strong people!”

Among the eight dead in Israel were a soldier patrolling the Gaza border and six civilians, including two children, Israeli authorities said.

Israel launched full-day attacks on Friday to destroy what it said were several kilometers (miles) of tunnels, launch sites and weapons production stores used by the militants in an effort to stop the missile attacks.

In central and southern Israel, from small towns on the Gaza border to the metropolis of Tel Aviv and southern Beersheba, people have adapted to the wailing of sirens, radio and TV interruptions and the beeps of mobile phones. phones with red alerts sending them to cover.

Cross-border hostilities between Israel and Palestinian militants in Gaza have been accompanied by violence in mixed communities of Jews and Arabs in Israel. Synagogues have been attacked and street fighting has broken out, prompting the Israeli president to warn of civil war.

Ahead of a UN Security Council session on Sunday to discuss the situation, Biden’s government envoy Hady Amr, deputy assistant secretary for Israel and Palestinian Affairs, flew in on Friday.

The US Embassy in Israel said the goal was “to reinforce the need to work towards lasting peace.”

Egypt led regional efforts to secure a ceasefire, with Cairo relying on Hamas and others, including the United States, who were trying to reach an agreement with Israel.

“The talks took a real and serious path on Friday,” a Palestinian official said. “The mediators from Egypt, Qatar and the United Nations are intensifying their contacts with all parties in an attempt to restore peace, but no agreement has yet been reached.”

‘A cup of steam forms a kind of diplomatic solution’

The United Arab Emirates called for a ceasefire and negotiations on Friday, while expressing condolences to all victims of the fighting, citing the promise of the September accords that would make the UAE and Bahrain the first Arab states in a quarter. century that forged formal ties with Israel.

The Israeli military said more than 2,000 missiles had been fired from Gaza at Israel since the beginning of the conflict, about half of which were intercepted by missile defense systems and 350 missiles had fallen in the Gaza Strip.

Civil unrest between Jews and Arabs in Israel itself has dealt a severe blow to the attempts of Prime Minister Benjamin Netanyahu’s opponents to dismiss the Israeli leader after a series of unclear elections, giving rise to expectations that Israelis will vote for will go to the polls for an unprecedented fifth time. more than two years.