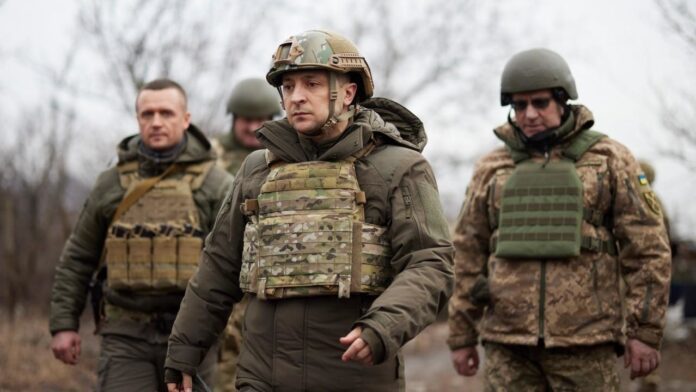 Russia warned on Thursday that a serious escalation of the conflict in the Donbass could “destroy” Ukraine as NATO expressed concern over what it said was a large Russian military build-up near eastern Ukraine.

Unverified images from social media have indicated that Russia has moved large quantities of tanks, armored vehicles and other equipment to regions bordering Ukraine and to Crimea, which Moscow annexed from Ukraine in 2014.

Russian activity poses an early challenge to the administration of US President Joe Biden, who this week held telephone talks with senior Ukrainian officials in public support for President Volodymyr Zelenskiy’s government.

“On the one hand, it is the usual tactic, to turn the conflict upside down to create instability, to show that Russia is a key player,” said an EU diplomat. “We can not rule out that Biden’s presidency is part of the Russian calculation, that it is time for Moscow to show some muscle.”

Moscow and Kiev have long accused each other of failing to reach a Donbass peace agreement. Conditions are further strained by the fate of the Nord Stream 2 gas pipeline to Germany, which Kiev and Washington want to stop, and by a force in Ukraine against a prominent businessman near Russia.

NATO said it was concerned about Russia’s military build-up when NATO ambassadors met to discuss a recent escalation of violence in the eastern Donbass region, where Ukrainian troops have been battling Russian-backed separatist forces in a conflict that Kiev estimates has killed 14,000 people since 2014.

US Secretary of Defense Lloyd Austin spoke with his Ukrainian counterpart Andrii Taran and “recently condemned the escalation of Russian aggressive and provocative measures in eastern Ukraine,” the Pentagon said.

Ukrainian Foreign Minister Dmytro Kuleba accused Russia of a “systemic deterioration” of the security situation in Donbass and Crimea.

Kremlin spokesman Dmitry Peskov downplayed the build-up, saying “this should not disturb anyone and it does not pose a threat to anyone”. Russia has taken steps to ensure security at its own borders, he said.

“There is increased activity at the border with Russia’s borders by NATO, other alliances, individual countries – everything forces us to be vigilant,” says Peskov.

Russia’s Foreign Minister Sergei Lavrov said most of Ukraine’s military seemed to understand the risk of a “hot conflict” in the Donbass.

“Russian President Putin said (this) not long ago, but this statement is still relevant today, that those who would try to start a new war in the Donbass – will destroy Ukraine.”

“Allies shared their concerns about Russia’s recent large-scale military operations in and around Ukraine. Allies are also concerned about Russian violations of the July 2020 ceasefire that led to the killing of four Ukrainian soldiers last week, the official said.

Ukraine, Western countries and NATO accuse Russia of sending troops and heavy weapons to back its powers in Donbass, which seized a stretch of eastern Ukraine in 2014.

Russia says it only provides political and humanitarian support to separatist fighters in what it provides as an internal conflict.

“In addition, an attempt to advance Russian occupying forces deep into Ukraine is not ruled out,” it said.