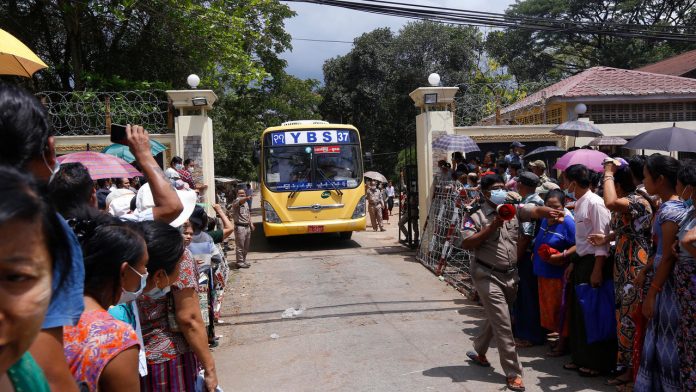 Myanmar’s junta on Saturday announced that it pardoned and released more than 23,000 prisoners to mark the traditional New Year’s holiday in Thingyan, but it was not immediately clear whether they included pro-democracy activists imprisoned in the wake of the military takeover in February.

The releases were announced on state broadcaster MRTV, which said junta chief Senior Gen Min Aung Hlaing had pardoned 23,047 prisoners, including 137 foreigners who will be deported from Myanmar. He also reduced punishment for others.

The move comes as daily protests against the dismissal of the elected government in Aung San Suu Kyi continue on February 1, as does the use of lethal force against them.

According to the Assistance Association for Political Prisoners, which monitors accidents and arrests, government forces have killed at least 728 protesters and spectators since the takeover. The group says 3,141 people, including Suu Kyi, are in custody.

Unconfirmed but credible accounts with photos on social media claimed that three people were killed on Saturday by security forces in a violent attack in the central city of Mogok, in Myanmar’s pearl break.

The three are members of the performance group Peacock Generation, where they were arrested during this year’s New Year celebrations for sketches that liked military representatives in parliament and military involvement in business.

Their traditional spectacle is called Thangyat, a mixture of poetry, comedy and music with a sharp undertone of satire. Several members of the troop were convicted under a law that prohibits the dissemination of information that could endanger or demoralize military members. The actors may have drawn the military’s special anger for appearing in army uniforms.

Several members were also found guilty of online slander to stream their performances live. It could not be determined if all the imprisoned members of the group were released.

Another released prisoner was Ross Dunkley, an Australian newspaper entrepreneur who was sentenced in 2019 to 13 years in a prison in Myanmar for drug possession. His release was confirmed by his ex-wife Cynda Johnston, The Sydney Morning Herald reported.

Dunkley founded The Myanmar Times, an English-language daily newspaper, but was forced to give up his share of it. He became known for founding or acquiring English-language publications in former socialist states that sought foreign investment when they liberalized their economies, but was sometimes criticized for doing business with authoritarian regimes.

Early release of prisoners is common during major holidays, and this is the second round that the ruling junta has announced since it took power.

Following the release of more than 23,000 convicts to celebrate Union Day on February 12, it was reported on social media that some were recruited by the authorities to carry out night violence in residential areas to spread panic, especially by setting fires. Some areas responded by setting up their own neighborhood groups.

In March, more than 600 people detained to demonstrate against the coup in February were released from Insein Prison, a rare conciliatory gesture by the military that appeared to be aimed at staging the protest movement.

The liberated were mostly young people captured by street demonstrations, while those who were considered protest leaders were kept locked up.

Neither the military government nor those who oppose it show any signs of supporting themselves from their power struggle. Western nations have tried to pressure the military through diplomatic and economic sanctions with little clear effect.

Myanmar’s Southeast Asian neighbors, worried about the prospect of regional instability, are also trying to get the junta back on track to restore democracy or at least end its violent repression.

A spokesman for the Thai Ministry of Foreign Affairs in Bangkok said on Saturday that Junat chief Min Aung Hlaing has confirmed that he will attend a summit of the Association of Southeast Asian Nations – ASEAN – which is expected to be held on April 24.

Tanee Sangrat said in a text message to journalists that Brunei, the current chairman of the bodies of ten nations, confirmed that it had proposed the date of a meeting of the group’s secretariat in the Indonesian capital Jakarta. Indonesia has taken the lead in convening the special meeting to discuss the crisis in Myanmar.