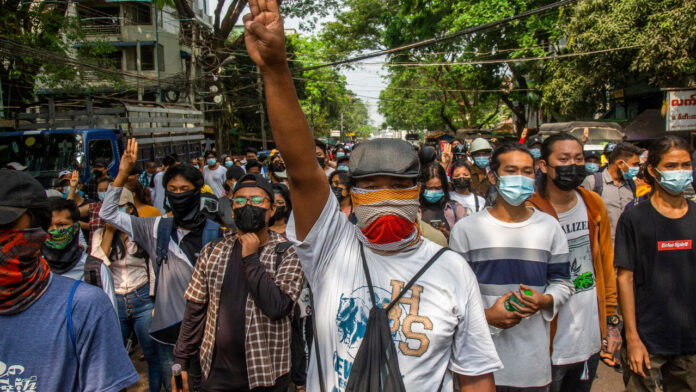 Myanmar’s security forces killed at least 11 protesters on Saturday, witnesses said, in a violent attack on demonstrations across the country as the military regime staged a major show of force for its annual armed force.

The nation has been in turmoil since the generals fired and arrested civilian leader Aung San Suu Kyi in February, sparking a major uprising that called for a return to democracy.

Violent morning raids by security forces thwarted some plans for new protests that had been called in various cities to coincide with the parade in the capital Naypyidaw.

As troops carried torches and flags as they marched alongside army vehicles, junata leader General Aung Hlaing again defended the coup, promising to give power after a new election.

But he also issued another threat to the anti-riot movement that has gripped the country since taking over the leadership, warning that “terrorism that could be detrimental to state peace and security” was unacceptable.

“The democracy we want would be undisciplined if they do not respect and break the law,” he said.

The Day of the Armed Forces, which celebrates the beginning of local resistance to the Japanese occupation during World War II, usually accompanies a military parade involving foreign officers and diplomats.

But the junta has struggled to gain international recognition after taking control of Myanmar, saying eight international delegations attended Saturday’s events, including China and Russia.

By noon, violence had erupted around the country as protesters tried to return to the streets to demand democracy.

A doctor in Wundwin city in the central Mandalay region confirmed the deaths of two protesters, while in the northeastern Shan state, police and troops opened fire at a meeting of university students, witnesses told AFP.

A rescue worker confirmed that at least three people had died – which was confirmed by local media reports – but his team could not remove the bodies.

“Our rescue workers tried to pull them out when they were shot, but it fired so much,” he said.

Over the commercial hub Yangon, plumes of smoke rose over the former capital, which has emerged as a hotspot for unrest in recent weeks.

An overnight gathering in front of a police station in the south of the city – where protesters demanded the release of their friends – became violent at midnight, and the shooting did not stop until 4 in the morning, a resident said.

At least five died, including a 20-year-old boy in her neighborhood.

“We are going to his funeral today,” she told AFP. “Conditions on the ground are very scary right now.”

Further north near the infamous Insein Prison, a pre-dawn demonstration – in which protesters wore bicycle helmets and were protected by sandbag barricades – turned into chaos as soldiers began firing.

At least one person was killed – a 21-year-old police officer, Chit Lin Thu, who had joined the anti-riot movement.

“He was shot in the head and died at home,” his father Joseph told AFP.

“I’m extremely sorry for him, but at the same time I’m proud of my son.”

As the military celebrated Naypyidaw Day in Naypyidaw, the committee representing Pyidaungsu Hluttaw (CRPH) – a group of dismissed parliamentarians working underground against the junta – condemned the power show after a bloody seven weeks.

“We should not allow these military generals to celebrate after they have killed our brothers and sisters,” said the UN Special Envoy, who is leaving Moniker Dr Sasa.

Speaking during a Facebook live stream of a “Global Virtual Protest” – which brought together Myanmar’s diaspora around the world – his speech received 20,000 reactions.

“They are the enemy of democracy,” Sasa said. “We will never give up until democracy is achieved, until federal democracy has been built and until freedom comes to our people.”

A statement broadcast on state television warned young people not to take part in what it called a “violent movement” against the military regime.

“Learn the lesson of those who have brutally died … do not die for nothing,” it said.

Nearly 330 people have died in demonstrations against the coup – including a large number killed by direct headshots from security forces – and more than 3,000 others have been arrested, according to the assistance group Assistance Association for Political Prisoners.

The protest movement has also included extensive strikes by officials, which have halted many basic government functions.

Coming on top of a Covid pandemic that hit Myanmar hard, the events since the coup have also affected the economy. The World Bank has warned that the country is facing a huge decline in GDP of 10 percent in 2021.