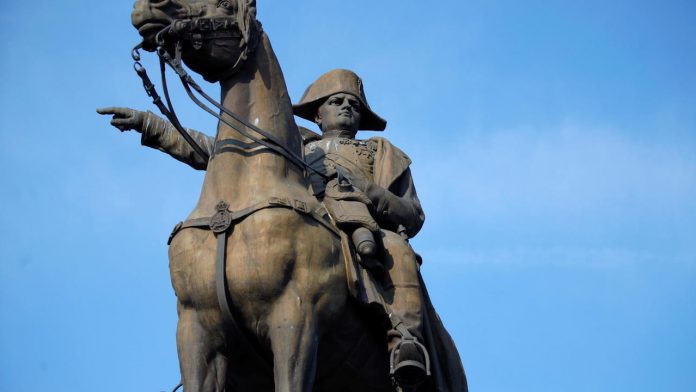 French President Emmanuel Macron will lay a wreath at Napoleon Bonaparte’s grave to mark the 200th anniversary of his death on Wednesday after months of debate over the legacy of the country’s most famous autocrat.

Macron waited until the last minute to announce his plans for the tricky biennial and tries to go halfway between those who wanted a party and others who demanded a boycott.

The famous Corsican is one of the most divisive figures in French history, his enormous contribution to the creation of the modern state against his imperialism and military power.

But in the wake of the Black Lives Matter movement and the emergence of a new generation of loud anti-racism campaigns in France, Napoleon’s decision to re-establish slavery in 1802 has become the focus of debate.

“It will be a day of remembrance, not a celebration,” a French president’s assistant told reporters on Monday, adding that today’s ceremonies would include a wreath-laying ceremony and a speech.

Macron has criticized recent attempts to overthrow statues of French people involved in slavery, and he has condemned the so-called “interrupt culture” as an attempt to “erase what we are”.

“Our strategy is to look history in the face,” the presidential assistant said, adding that the approach meant “neither denial nor repentance.”

Macron thought it was wrong to judge figures from the past according to today’s ethical standards, the assistant added.

But in a speech at the Institut de France, one of many Napoleonic institutions, the French president will condemn slavery as “an abomination, even in the context of the era”, the assistant said.

The 43-year-old president, elected France’s youngest leader since Napoleon, will also judge his lasting influence on the state bureaucracy, as well as the school and the judiciary.

Tyrant, genius or both?

Napoleon seized power in a coup in 1799 and overthrew France’s first republic, which was founded in the wake of the 1789 revolution which abolished the monarchy.

He was known for his military prowess and won a number of victories, including the Battle of Austerlitz, which resulted in a French empire dominating most of continental Europe.

But in addition to crowning itself to the emperor and crushing the new attempts at democracy at home, Napoleon also restored gains for women and the ban on slavery introduced during the First Republic.

Slavery was re-established in French colonies, a move that some saw as motivated by a desire to dominate the Caribbean sugar trade in the face of competition from arch-enemy England.

However, Mathilde Larrere, a French historian, believes that there was a “racist dimension” in the decision.

In the New York Times, the American researcher Marlene Daut Napoleon recently wrote for “France’s greatest tyrant” and “an icon of white supremacy” in a column condemning planned monuments in France.

During the construction of the second anniversary of Napoleon’s death on the island of Saint Helena, about 160 French institutions from schools to museums have signed up for events grouped under the label “Annee Napoleon 2021”.

Although many of these events have been affected by the coronavirus pandemic, French TV shows have been saturated with new documentaries and libraries are filled with new books that look at all aspects of his life.

“Why should we not celebrate Napoleon?” right-wing nationalist leader Marine Le Pen told France Inter radio on Tuesday. “He is a huge historical figure. I regret that the President is celebrating him in a hurry.

“He did so much for the country, and he gave so much to the world.”

Left-wingers have urged Macron to avoid the opportunity.

“The Republic should not pay an official tribute to the person who buried the first Republican experience in our history by installing an authoritarian regime,” leftist Alexis Corbiere wrote in Le Figaro newspaper in March.

Other French leaders have also been forced to struggle to remember the man known as “the little corporal”, known for his cloak and “bicorne” hat, which he wore sideways on the battlefield.

In 2005, the late President Jacques Chirac refused to attend the 200th anniversary of the Battle of Austerlitz, in which Napoleon defeated major Russian and Austrian forces.