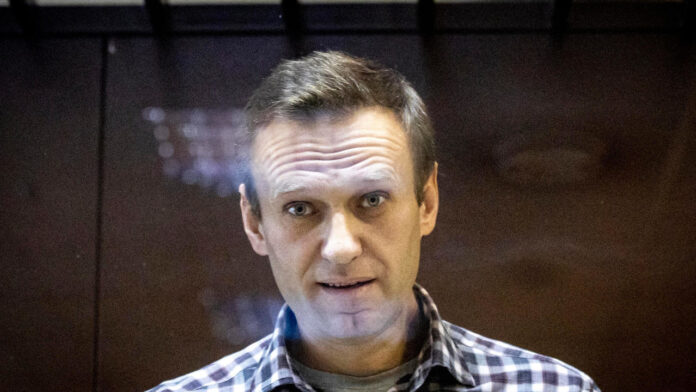 Imprisoned Kremlin critic Alexei Navalny is deeply concerned about his decision to go on a hunger strike, saying they fear more damage to his already fragile health.

The 44-year-old is serving two and a half years on old frauds in a penal colony east of Moscow. He was arrested when he returned to Russia in January from Germany, where he had spent months recovering from an almost deadly poisoning he blames on the Kremlin.

Navalny says he suffers in prison from severe back pain and numbness in his legs and has only been given painkillers.

His allies said his hunger strike announcement was not a casual threat and they did not expect him to withdraw.

“Navalny has always taken such a step as a hunger strike extremely seriously,” Ruslan Shaveddinov, a spokesman for the opposition figure, told AFP.

“We are very concerned about his condition and that is why we demand immediate access to a doctor.”

Navalny is still recovering from the poisoning in August last year, when he began to howl in pain and collapsed on a flight from Siberia to Moscow, forcing the plane to make an emergency landing in the city of Omsk.

He was treated for several days by local doctors and eventually fled to Berlin in an induced coma.

Western experts concluded that he was poisoned by the Soviet nerve agent Novichok. Russian authorities have repeatedly denied any involvement.

Navalny spent months recovering in Germany, undergoing physical therapy to learn how to walk and even lifting a glass of water.

In accordance with the usual forms, Navalny initially shed light on his new ailments, but on Wednesday he became serious.

“I have the right to ask for a doctor and get medicine … Jokes aside but this is already bothering me,” he said.

The prison service said Navalny was provided with “all necessary medical assistance in accordance with his current medical condition.”

Shaveddinov said Navalny would not have made the decision to go on hunger strike easily.

“After a poisoning, no one knows what kind of reaction a body may have in this situation – and this is very alarming,” he said.

Navalny’s team declined to give details on how the hunger strike will be carried out, but it is an act of which his allies have experience.

His ally Lyubov Sobol spent 32 days drinking only in the summer of 2019 after she and other opposition politicians were banned from running in the local elections.

In 2015, Navalny’s right-hand man Leonid Volkov and a group of activists in the Siberian city of Novosibirsk went on hunger strike after being disqualified from local elections.

That operation ended after 12 days, when one of the group’s members, opposition politician Sergei Boyko, was in hospital.

Russia’s most prominent political hunger striker in recent years was Oleg Sentsov, a Ukrainian filmmaker and outspoken critic of Moscow’s annexation of his Crimean home in 2014.

Sentsov was arrested and detained in 2015 on terrorism charges, demanding the release of him and Ukrainian political prisoners in Russia.

He ended it after 145 days of receiving supplements – and glucose drops near the end – after prison officials announced that they would force him to be fed to ensure his survival.

Sentsov, who was eventually released in a prisoner exchange in 2019, lost 20 kilos (44 pounds) during the strike.

Russian law requires prison services to force prisoners to feed if they do not eat voluntarily.

It does not specify how this should be done, but rights activists have reported that prisoners are fed with a “nutrient mixture” orally, rectally or through a tube.

Navalny “is well aware that a hunger strike is a desperate step,” Allied economist Sergei Guriev said on Twitter.

“Because he went on hunger strike, it means he thinks he has nothing to lose, that the situation is unbearable.”