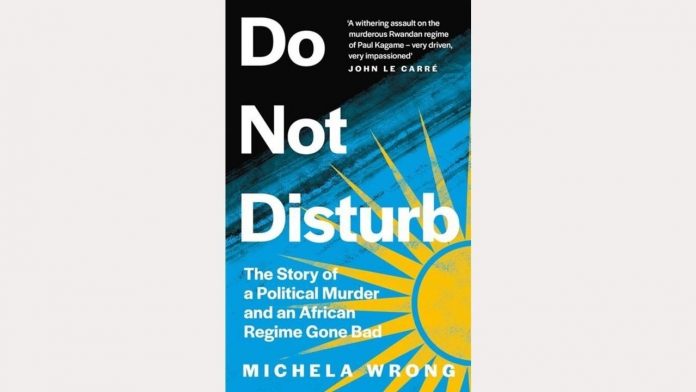 Rwandan President Paul Kagame is often portrayed as the savior of his nation. But in his new book “Do Not Disturb: the story of a political assassination and an African regime that went bad”, former Financial Times journalist Michela Wrong presents him as a ruthless dictator.

Michela Wrong’s investigation is a public relations disaster for Paul Kagame. “Do Not Disturb”, published by PublicAffairs, is a contemporary history book that reads like an intricate thriller. Error tries to dismantle Kagame’s image as Rwanda’s savior and the man who helped the small nation develop into the country it is today after the 1994 genocide of the Tutsis.

Her 500-page work is mainly based on interviews with those who have known Kagame all his life. From his youth growing up as a refugee in neighboring Uganda to his rise to power after the genocide and his more than two decades as president.

The book focuses on two Rwandans who were once very close to Kagame: Fred Rwigyema and Patrick Karegeya. Both have since been murdered.

“Men of whom one can honestly say, ‘I have never heard a bad word said about him’ are rare, but Fred Rwigyema seems to have been one of them,” Wrong writes.

Throughout the book, he is described as a charismatic and humane leader of Rwanda’s Patriotic Front (RPF) in stark contrast to Kagame, who is portrayed as insecure and cruel. To this day, the conditions for Rwigyema’s death in 1990 in northern Rwanda are unclear – the same year, the RPF first tried to overthrow President Habyarimana’s Hutu regime.

Fel, who was a journalist for Reuters and the Financial Times in Africa for many years, knew Patrick Karegeya well. Karegeya served for a long time as Rwanda’s intelligence chief. But when he realized that Kagame was becoming increasingly authoritarian, he eventually fled to South Africa.

He was strangled to death at a hotel in Johannesburg in January 2014. Kigali denies any involvement. But a few days after his death, Kagame declared, “He who is against our country will not escape our wrath.”

Karegeya, the main character in the book, is portrayed as witty, intelligent and well-liked. On the other hand, Kagame is “introverted, suspicious, inexplicable and a switch to sudden violence”.

It is Karageya who best explained the character of the regime in 2003, when he was still close to Kagame.

“We have a higher population density than any other country in Africa,” he said. “So we have no room for another war (…) Therefore, every threat will be dealt with preventively and extraterritorially (…) There are two countries in the world that have this doctrine, we and Israel.”

Some of the most riveted chapters in the book tell the years the RPF leaders spent in Uganda. Many fled there in 1959 and the following years after the outbreak of anti-Tutsi violence in Rwanda.

They joined the uprising led by now President Yoweri Museveni and helped him seize power in Kampala in 1986. As a thank you, they were given high-ranking jobs in the Ugandan army. Gradually, the RPF became an army within the army.

Museveni still says he was surprised when it attacked Rwanda in 1990. “The mass departure was a great humiliation for the Ugandan government,” Wrong wrote.

Over the years, the relationship between Kagame and Museveni, his former mentor, would become acidic. The two countries later fought with each other in the Democratic Republic of Congo (DRC) for access to the great nation’s mineral resources, killing many Congolese civilians in the process.

The plane crash that triggered the genocide

The incident that triggered the genocide in Rwanda occurred in April 1994 when the plane with Hutu president Juvénal Habyarimana was shot down.

Wrong devotes many pages to the question of who fired the missile, whether extremists from Hutu or RPF. Kagame’s former allies, including Karegeya, declared after fleeing Rwanda that it was the RPF. But in 2012, French judges concluded that the most likely culprits were Hutu extremists.

Three months after the genocide began, the RPF took power. During those three months, Wrong writes, “despite the RPF’s ubiquitous general etiquette as the ‘former rebel group that stopped the genocide’, the movement’s priority at this point was to seize power and not save lives.”

She describes how the RPF ten days after the assassination of Habyarimana strongly opposed the UN sending more peacekeepers to Rwanda. She also quotes UN expert Robert Gersony’s conclusion that about 30,000 people were killed by the RPF in the months following the genocide.

In 1996, Rwanda invaded the DRC – then known as Zaire – apparently to pursue those responsible for the genocide who fled there.

But the UN would also accuse Kagame’s men of killing thousands of Hutu civilians, including women and children. UN experts also accused the Rwandans of staying for several years in the eastern DRC to plunder the country’s natural resources.

So why has the Western world, which failed to intervene during the genocide, been so easy on Kagame all these years? For wrong, “there was the amorphous guilt that white liberals felt against the whole story of colonial oppression: (…) shameful feelings that stretched through the generations and were associated with all societies that had been exposed or ignored when the spoiled West turns away his rocky face ”.

Rwanda is regularly condemned today by organizations such as Human Rights Watch for suppressing the opposition and the lack of individual freedoms. Error believes that by choosing to ignore the true nature of Kagame, Western powers effectively abandon the Rwandans for the second time.

“Rwanda is a private mourning,” she writes.