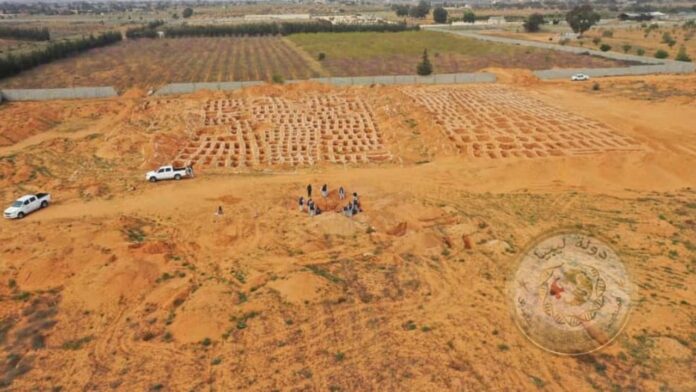 When a mass grave was discovered in Tarhouna, Libya, it was not the first time the inhabitants there had experienced this trauma and it is probably not the last. The bodies unearthed there belonged to the victims of the militia run by the murderous al-Kani brothers, who ruled the region for five years during a period of terror. Our observer still has no idea what happened to his seven cousins ​​who disappeared at the end of 2019.

Tarhouna, 80 kilometers east of Tripoli, was captured by the Libyan National Army under the command of Marshal Khalifa Haftar on April 4, 2019. Haftar was a strongman in eastern Libya who dreamed of controlling the entire country. He used Tarhouna as a base to launch his offensive against the capital Tripoli. Forces loyal to the National Accord Government (GNA) withdrew Tarhouna on June 5, 2020.

But the city had been living during the al-Kani militia’s terror period since 2014. A family business, the militia is run by Mohammed Khalifa al-Kani along with his brothers Abdelkhaleq, Mouammar and Abdulrahim. A fifth brother, Muhsen, was killed in September 2019. The al-Kani brothers and those who carried out their mission were kidnapped, tortured, killed and disappeared from all who opposed them or were suspected of doing so.

This almighty militia “controlled all aspects of life”, according to Human Rights Watch. At least 338 residents of Tarhouna have been reported missing, according to the GNA-linked authority for searching and identifying missing persons.

The Al-Kani militia allied with Marshal Haftar as early as 2019. But when forces loyal to GNA took back the city in June 2020, the militia’s rule was over and the brothers fled. It was only when the authorities began the difficult work of excavating the mass graves that al-Kanis had left behind.

The president of the victims’ association in Tarhouna, Abdelhakim Abou Naama, said that 43 mass graves have been discovered so far and that more than 200 bodies have been excavated. But only 50 of them have so far been identified and returned to family members.

Mohamed Jaaca, 31, lives in Sidi El Saïd, a village near Tarhouna. Seven of his cousins ​​disappeared from the militia.

“This militia would kill or kidnap with a hat”

We still hope to find my seven cousins ​​alive. They were kidnapped from their home on November 19, 2019 around midnight. The militia stole their cars and money. We heard that they were being taken to a prison in the city of al-Qadia. We still do not know why they were kidnapped. This militia would kidnap or kill with a hat.

One of my cousins ​​who was kidnapped is named Rabi Ali Khalifa. We’re really close.

More bodies are revealed almost every week. On Wednesday [March 24], the bodies of my close friend, Abdelkrim, and some of his family members were found in a mass grave. The al-Kani militia accused them of sharing information with the Tripoli government about Haftar’s forces in Tarhouna. My friend Abdelkrim, his father and his two brothers will be buried this Friday [March 26].

In general, victims are identified by their families. The body is taken to the morgue at the University Hospital in Tripoli. There is also a room where their personal belongings, clothes and jewelry are displayed in the hope that they can be identified in this way.

The hospital also uses DNA testing to identify victims, but practice is not widespread.

Medical workers perform DNA analysis on a body unearthed in Tarhouna on March 15 at the University Hospital of Tripoli. © Facebook

Research groups are digging a mass burial site on March 10 in Tarhouna. © Facebook

Most of the mass graves have been found thanks to information from the locals or those who are lucky enough to have escaped the murders. Most of these tombs were discovered in vacant lots in an area called Machrou Al Rabt, about ten kilometers from Tarhouna.

The bodies of women and children have also been found in these mass graves. In January, twelve members of the M’dich family were buried by their loved ones. Two of the victims were women.

In a report published in November 2020, the prosecutor of the International Criminal Court (ICC) said that her office had “received credible information indicating that forces from Tarhouna … are alleged to have committed serious crimes including murder, abduction, [and] forced disappearances … ”reported Human Rights Watch.

Entering of two members of the M’dich family, in January 2021. © Internet

The funeral of 12 members of the M’dich family in January 2021. © Internet

The Al-Kani militia took control of Tarhouna in 2014 and sowed fear in the local community. The brothers liked to mate around town with their companion lions and tigers to scare people.

But when Marshal Haftar retook the city in late 2019, al-Kanis allied itself with its forces. New powerful, the militia began to commit even more murders and kidnappings, especially against prominent families who were considered sympathizers of the Tripoli government.

Abdulrahim was the most terrifying. We nicknamed him “the iron hand.” He killed in cold blood for no reason. He would kill someone if he did not like the way they looked at him. He suffered a serious eye injury in December 2019 and went abroad for treatment but returned to sow terror in the city until June 2020.

In June 2020, Tripoli’s prosecutors released an arrest warrant for the al-Kani brothers and about 20 of their closest associates.

For several years, Libya has been terrified of conflict and tensions between two rival governments, the GNA government, based in Tripoli and recognized by the UN and the government led by Khalifa Haftar in the east. But on March 15, a new unity government took office, led by caretaker Prime Minister Abdelhamid Dbeibah. This government is intended to replace the two competing governments and bring the country together.

In this new government, some residents of Tarhouna say they see an opportunity to highlight the crimes committed by the al-Kani brothers. Mohamed continues:

“We asked the new government to carry out a serious investigation to locate al-Kanis and bring them to justice. We want them to talk, to tell where the victims are buried and where the missing are. We want a transitional process. trial, that the truth is known and that the victims and their families receive compensation. “