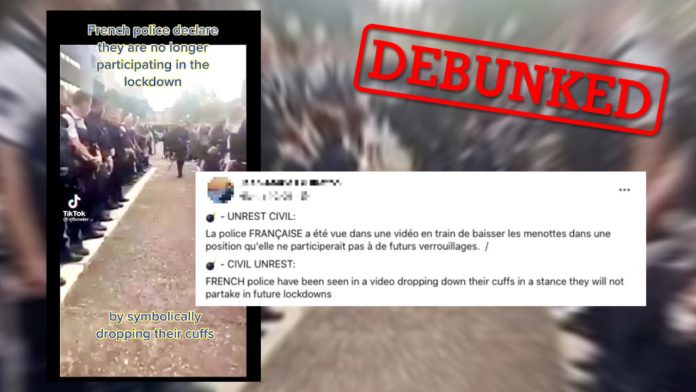 A video that began circulating on social media in the United States and Brazil, before being shown on French social media on April 7, shows French police throwing their handcuffs to the ground. Contrary to rumors circulating online, these police officers did not carry out this measure to protest against lock-in measures.

This video shows two lines of police throwing handcuffs to the ground. It was all a small group of social media users needed to spread the rumor that French police were rebelling against lock-in measures put in place to stop the spread of Covid-19.

Various video clips showing the same scene have been circulating online in Latin America since early April. This particular video was shared more than 300,000 times on Facebook along with a caption that French police decided to “stand with the people” and “not destroy the country’s constitutional rights” by rejecting the lock.

The video showing French police throwing down their handcuffs is also being spread on Facebook in Brazil. © Observers

On April 7, a similar post was published on a Facebook page called “MACRON or the big illusion: when will the scammer be revealed?” The post contains the video along with a caption that says that the police will henceforth refuse to punish people for breaking with locking.

The video was published on a French Facebook page called “Macron or the Great Illusion”. © Observers

If you zoom in on a screenshot of the video, you can see that it is a repost of a video from TikTok. The person who published the video describes himself as a “conservative father”. The videos were shared on social media by US accounts. This is evident from a series of tweets, all of which have a short video that was originally published by a US account. Each one is about a minute long and shows different excerpts of the same video. This indicates that the original video is several minutes long.

This series of tweets shows four different excerpts from the original video, all of which were published on TikTok by US accounts. © Observers

The people in the videos are actually French police, as evidenced by their uniforms and badges that say “national police”. You can hear one of them say in French: “This shows how tired we are!”

However, it is not clear from the video when it was filmed. Some of the police do not wear masks, which makes it seem as if it was probably filmed before 20 August 2020, when it was mandatory to wear masks for the national police.

This simple search on Facebook helped us track the original video. © Observers

To find the original source of the video, we entered some keywords in the search field on social media. For example, if you search for “police France handcuffs” in French on Facebook and then click on videos in the results, you will find a video from June 2020. The video, which is about 30 minutes long, has the text “Angry police throw down the handcuffs in protest ”.

Two minutes in you hear: “We live on Brut, in front of the Bobigny police station” (Bobigny is a town in the department of Seine-Saint-Denis). This makes it possible to identify the original video, which was published on June 11 on Brut Media’s Facebook page. The title reads, in French, “Angry police performance. Rémy Buisine directly from Bobigny. ”

The original video was filmed live on June 11, 2020 by Brut journalist Rémy Buisine.

Video is taken out of context

In his video, journalist Rémy Buisine explains why the police arranged this incident. His video shows “between 100 and 150 police officers” filmed live when they “will symbolically drop their police badges and handcuffs to condemn statements by Christophe Castaner [Editor’s note: then French minister of the Interior] earlier that week ”. So it had nothing to do with a protest against locking.

On 8 June 2020, Christophe Castaner made several announcements to put an end to the “misconduct” committed by certain police officers, including the ban on several arrest techniques. The police union was angry with Castaner’s statements. This occurred during a period of intense tension between citizens and the police after the police killed George Floyd in the United States.

The police who gathered that day in Bobigny felt that the minister “stigmatized the whole profession”, which is “what they wanted to condemn today with this display”, says the journalist in Brut. Similar events were held on the same day in other French cities, including Lyon, Bordeaux and Toulouse.