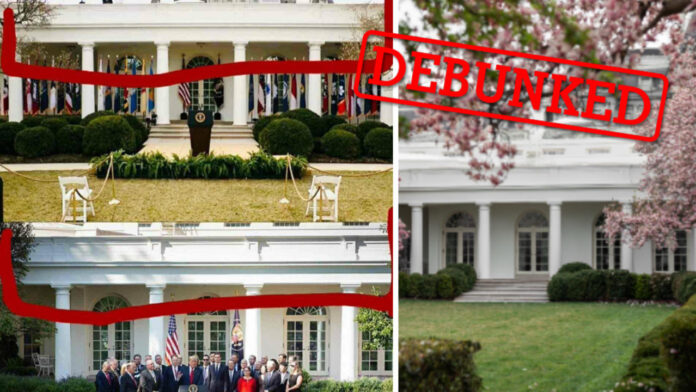 Since Joe Biden’s inauguration, conspiracy theories have surfaced online claiming that the new president is not really in office. According to Donald Trump’s supporters and the global QAnon movement, “revealing” visual evidence in the form of photo comparisons Joe Biden’s White House is a set. But when we examine the pictures, we can confirm that they really are real pictures of the White House.

The post has been circulating in Japanese in conspiracy groups on Twitter (with more than 1700 likes) and Telegram (42,000 views) since March 13, 2021. In this tweet, the caption asks: “How many white houses are there in the United States?”. The photo montages highlight alleged differences between the two pictures, especially in the decoration and the windows on the first floor of the building.

The lower photo shows former President Donald Trump behind the podium in the Rose Garden, next to the west wing of the White House, next to the Oval Office. Press events are held regularly in this space.

This photo was taken on October 1, 2018 during a press conference organized by the former president about the new trade agreement between the United States, Canada and Mexico. In this photo taken for AFP, the people and their clothes (the color of the ties and the red dress) are all placed in the same way.

Screen capture of the photo visible on the AFP image library, AFP photo prize by Jim Watson on October 1, 2018. © Observers

The top photo is blank and therefore more difficult to date. The flags, which appear to have been installed after Joe Biden arrived at the White House, provide the only clue. They will not appear in any photo until January 20, 2021.

So, how can we explain the differences between the two pictures?

As for the ornaments, they are more or less visible depending on the time of day: when the sun goes down, it casts the ornaments in the shade, which makes the contours sharper. On the contrary, if the sun shines directly above, the ornaments will not be cast in the shade and will therefore be less visible because they have the same color as the rest of the building.

In fact, by changing the contrast of the photo, you can see that these ornaments are displayed.

Screen capture of the photo broadcast by the internet users, where the contrast was modified by France 24 to make the ornaments. © Observers

Finally, with regard to the windows in the background, which are visible on the first floor of the White House in the picture with Donald Trump but are not shown in the second picture, it is a matter of perspective.

A photographer standing closer to the podium will not be able to view the windows completely from this angle. But if the photographer is further away, the windows will be in a frame. This can be seen by the chandelier under the columns in the middle of the top image, which is almost invisible in the lower photo.

The image below, taken by Brendan Smialowski for AFP on May 11, 2020, shows that the ornaments are visible in some lighting and that the windows were already there, even during Trump’s term.

Screen capture of the photo visible on the AFP image library, AFP photo prize by Brendan Smialowski on May 11, 2020. © Observatör