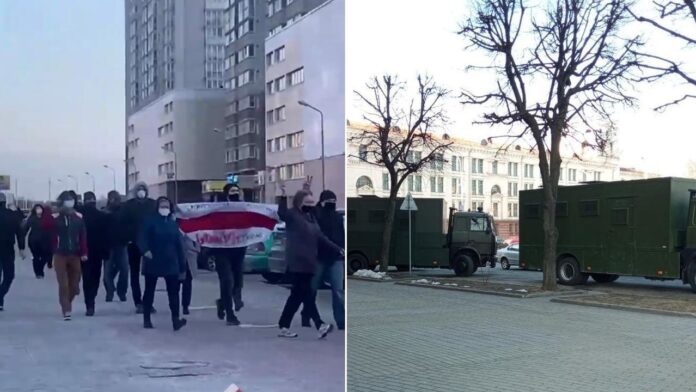 When the Belarussian opposition leader in exile, Svetlana Tikhanovskaya, called on protesters to take to the streets on Freedom Day on March 25, only a few brave souls responded. Police flooded the streets of Minsk, when the government led by President Alexander Lukashenko continues to crack down on the opposition over the country. Our observer describes a day colored by fear of arrest, with very few flags, posters or shouted slogans.

The night before the protests were to take place, circulating videos showed that the security forces were already gathering in Minsk on Telegram channels populated by members of the Belarusian opposition:

This video was published on Telegramkanalen @belarusseichas on March 25th. It shows vehicles belonging to the security forces gathered in central Minsk.

As the day went on, more and more videos appeared showing police patrolling the streets:

This video was published on the Telegram channel @belamova on March 25th. The caption reads: “See how the security forces march in groups. It seems that someone is very scared. ”

Other videos show small groups of protesters gathering nervously on the streets of the capital, like this one, which was filmed in a residential area:

In this video, which was published on the @Belamova Telegram channel on March 25, you can see dozens of protesters, some of whom carry the opposition’s white, red and white flags.

The Belarusian opposition began celebrating Independence Day on March 25, 1989. The date marks the anniversary of the creation of the first independent Belarusian republic in 1918, which was overthrown a year later by the Bolsheviks. The opposition movement against President Lukashenko chose the white, red and white striped flag of this short-lived first republic as its symbol.

This year, the government banned protests on March 25, citing coronavirus and “talks to extremism” that had been circulating in the Telegram messaging program. In the capital, there were more security forces than protesters in the city center, according to the Belarusian media Tut.by. More than 200 people were arrested, according to figures from the Interior Ministry.

‘It was an anxious atmosphere, I did not feel safe’

Our observer, who wished to remain anonymous, was one of the people who believed the ban. An active participant in the protests against Lukashenko 2020, our observer said that the protests on March 25 are very different from the big rallies last summer. Few people had the courage to show up and signs, flags and slogans were almost absent:

I was in a small group with my mother and several friends. We started marching near the center, next to the Minsk Hero City Obelisk, where extremely important meetings have been held since August.

I had nothing with me, only marks with Eve on it [Editor’s note: Eve is a painting that has become a symbol of the protest movement] and a white rose on my coat. The other people around me did the same. According to what I saw on Telegram, everyone who clearly had the colors white, red and white [Editor’s note: representing the flag of the opposition movement] was arrested immediately.

When we looked at the faces of the people who marched with us, we understood that they were “with us”. They had brave, open faces. They smiled after all. Sometimes someone shouted “Viva Belarus!”, And everyone answered loud and clear.

This video, published on the Telegram channel @nexta_tv, shows a row of cars honking in central Minsk as a sign of protest against the president. The caption says, “Lenin Street is roaring too, like in August!”

Our observer said that the massive police presence made her feel sick to her stomach and scared:

There were always a large number of security officers around us in various uniforms. There was a bus filled with police at every street corner. Buses filled with security forces crossed the city center. It was an extremely anxious atmosphere. I did not feel safe.

Personally, I was scared. I went out without my phone, without anything, and I left a note at home with a list of things to take with me [Editor’s note: at the police station] if I were to be arrested. I went out and protested that I do it every year on Freedom Day. I dream of being able to walk the streets of my city without being afraid.

‘People are arrested for wearing the wrong clothes, for putting up the wrong colored curtains, for sending a message’

There have been more and more arrests, and more and more protesters have been tried since last summer. Sometimes the oppression becomes almost absurd. A 20-year-old woman was arrested for wearing white and red socks. Authorities increased the number of preventive arrests in the days leading up to March 25. Some Belarusians on social media said they had been told they would be fired if they took time off on March 25.

Our observer knows many people who did not go out to protest, but she said she does not blame them, given the violence and repression that has taken place in recent months:

I know people who protested last summer and autumn, but who did not come out this time. Some had been arrested, others could not return to the country because they were afraid of prosecution. Some just did not know where to go. Others just could not take such a serious risk.

Every week the oppression gets worse. People are arrested for wearing the wrong clothes, for putting up the wrong colored curtains [Editor’s note: red and white] or for sending a message.

There are many political prisoners. The security forces have looted homes, picked them up at work or even on the street.

We’re not safe anywhere. Our loved ones are not either. This type of climate leaves its mark on people.

After all, she has not lost hope that her citizens will gather again in the future.

On March 26, Alexander Lukashenko said he had “treated the opposition calmly” on Freedom Day. The same morning, the Interior Ministry released a statement claiming that he had countered a terrorist attack in the capital.

The re-election of Belarusian President Alexander Lukashenko on August 9, 2020 was questioned by the opposition, which said that large-scale fraud had cost opposition candidate Svetlana Tikhanovskaya the election. Up to 100,000 people participated in the protest movement that summer.