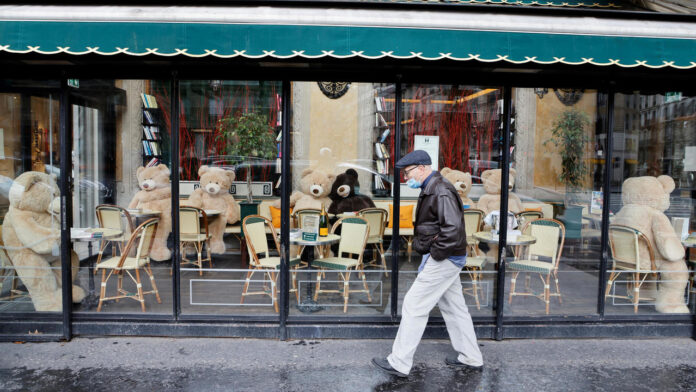 A third of France’s population was under a new partial lock-in on Saturday to stop the spread of Covid-19, as some European countries resumed AstraZeneca vaccinations following a clear clearance from EU regulators and the WHO.

The pandemic is still growing worldwide, with the number of new global coronavirus infections increasing by 14 percent in the past week compared to the previous week, according to AFP data.

Struggling to prevent another wave of the virus, several European countries went back into partial lock-in on Saturday – with Poland, parts of Ukraine and some French regions all waking up to tight new restrictions.

The Parisians packed trains that left the capital and squeezed into shops before the new restrictions came into force, which will apply to Paris and several other regions for a month.

The mayor of Yerres, just outside Paris, told AFP he had told companies there to remain open and defied the “completely incomprehensible” restrictions.

“Why would we catch Covid more in a shoe store than a bookstore?” he asked.

Bookstores are considered necessary under the new measures, and later Friday the government added florists, chocolate shops and shoemakers to the list.

Signs of lockdown fatigue were abundant in cities around the world, with protests against restrictions popping up in Vienna, Sofia and Montreal.

About 20,000 people were expected at a demonstration in the German city of Kassel on Saturday, which raises fears that it would be a super-spreading event.

The rate of infection is rising exponentially again in Germany, with the vice president of the Robert Koch Institute of Infectious Diseases warning of signs of a return to “many serious cases and deaths and hospitals being overwhelmed”.

Belgium and Switzerland, which are also falling, postpone the lifting of restrictions on Friday.

Concerns that AstraZeneca’s Covid-19 vaccine could cause blood clots had seen countries pause its use recently.

But after the European Medicines Agency said it was “safe and effective”, Germany and Italy announced that they would use jab again from Friday.

France also took it back – but just a few hours later, the National Health Authority recommended that it be used only for over 55 years, given that the reported blood clots were only seen in younger people.

The World Health Organization’s experts on vaccine safety said that “available data do not indicate a total increase in coagulation conditions” among vaccinated people.

The Netherlands, Spain, Portugal and Indonesia are also ending their suspensions, while the Irish Advisory Committee recommends following up.

To secure their population, British Prime Minister Boris Johnson and his French counterpart Jean Castex received their first dose of AstraZeneca on Friday.

“I literally felt nothing. It was very good, very fast,” Johnson said.

‘We are not afraid’

While political leaders were enthusiastic, some publics remain reluctant.

“I’m a little worried, of course, but what can you do? We have to do this,” said 42-year-old teacher Valentina at a vaccination center at Termini station in Rome.

In Spain, 22-year-old medical student Florentino Quinteiro said he was not worried after receiving an AstraZeneca dose last month.

“The people are not always familiar with the situation, but we are not afraid,” he said of his colleagues.

“In pharmacology, there is always a balance between benefit and risk,” he added.

Denmark, Norway and Sweden have not yet taken back the jab pending further scrutiny, while Finland said on Friday that it would pause for at least a week “until more information is available”.

However, the use and production of Russia’s Sputnik V vaccine has increased and the Philippines has become the latest country to give the green light on Friday, and the Indian pharmaceutical manufacturer Stelis Biopharma signed to produce 200 million doses.

Germany said it would order the Sputnik vaccine if the EU approves its use.

“Does not end now”

The United States marked an important milestone in its inoculation drive on Friday and administered its 100 million vaccine dose to meet President Joe Biden’s target weeks ahead of schedule.

As infection levels fall, there are hopes that the world’s worst-hit country, which has seen more than 540,000 deaths, is heading for a powerful rebound.

Meanwhile, Donald Trump’s Mar-a-Lago resort in Florida, where the former president has lived since leaving the White House, was closed, in part after some employees tested positive for Covid.

In Brazil, Rio de Janeiro’s famous beaches will be closed because the city’s mayor said the situation was “very critical”, with 95 percent occupancy in intensive care units at public hospitals.

President Jair Bolsonaro, who has been fighting for home remedies and face masks, criticized the measure.

“Vitamin D is a way to prevent the virus from seriously affecting you. And where do you get vitamin D? From the sun. Such hypocrisy,” said the right-wing leader.