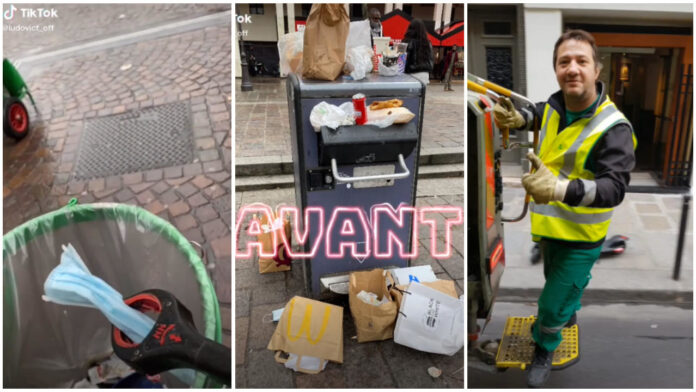 France has a new sensation on social media: Meet Ludovic, a Parisian garbage collector with a “green” conscience whose reverent but educational videos on how to be more environmentally responsible gather tens of thousands of views on TikTok and Instagram.

Since May 2019, Ludovic Franceschet has published up to three videos a day in which he raises awareness about increased waste due to the Covid-19 pandemic and how to handle the trash properly, while telling about his daily life as a street cleaner in French capital. His videos, which are at the same time humorous, friendly and informative, have earned him almost 60,000 subscribers on TikTok, his optional platform to reach his target group “15 to 36-year-olds”.

Ludovic, who four years ago worked as a nurse assistant, says that he changed jobs because he, as a garbage collector, wanted to be at the forefront of the fight to save the environment. “The earth is our home and we corrupt it,” he says.

In a TikTok video published on March 3, 2021, Ludovic Franceschet responds to a comment and asks him why he chose his profession. “Because I want my existence to be useful to humans and to the planet.”

In May 2019, when I discovered TikTok, I thought I could make a video about my work. It went well – it currently has 345,000 views – and I got about 100 subscribers. I thought, “maybe I can attract the interest of even more people”. As of August 2020, I discovered live videos that increased the popularity of my account even more.

My goal is to show the reality of my profession, to convey the right values ​​and to make people aware of the right actions when disposing of waste.

Covid-19 has caused an exceptional increase in waste, which means that we have twice as much workload as before. Because restaurants are closed, people get their food to eat on the streets. They throw their rubbish in the first bin they find, and if it’s full, some people put their rubbish next to it, but sometimes you just have to go to the next bin, which is not full.

In a TikTok video published on February 16, 2021, Ludovic Franceschet shows garbage cans before and after the intervention of garbage.

In a TikTok video published on January 31, 2021, Ludovic Franceschet shows a series of overflowing bins before and after his intervention.

It’s civilian behavior. The boxes in the parks are also overcrowded. Another example is masks: I pick them up from the ground every day, people place them next to them and forget, or the mask falls out of their pockets. It is dangerous for us, but it is also dangerous for other people, for example if a child touches it. The worm can be infected with Covid-19 or a whole host of other diseases.

In a TikTok video published on January 13, 2021, Ludovic Franceschet throws pieces of debris including masks and McDonald’s outlet bags in trash cans.

The problem with all this waste lying around is that as soon as there is a little wind it will blow away. We find rubbish in the trees, by the side of the road, and we can not always remove everything. But the work of garbage collectors is all the more important. In short, we are a bit like doctors on the streets!

Other measures I want to condemn are when people spit chewing gum on the ground or throw their cigarette butts on the street. People think “it’s OK, a garbage collector will pick it up”. But that’s not how it works.

In addition to this, I also want to show the difficulties with our work. For example, I made a video to show you how to pick up a syringe. There is a protocol, you use a pair of pliers, you put the syringe in a box. When I see a syringe, I’m happy because I’ll put it in a safe place and a child will not come across it.

My goal is to get as many subscribers as possible. I aim for 100,000 and then a million! I make two or three videos a day. It’s a real job and friends help me handle the different formats required between TikTok, Instagram, Twitter …

I would like to do more projects with schools: I will soon do a clean-up day with high school students in the Fontainebleau forest [south-east of Paris] and I will speak at the end of April in a high school to raise awareness about waste management.

A TikTok video published on March 4, 2021 shows Ludovic Franceschet asking a little girl why she throws rubbish. She replies: “to remove waste”, and he thanks her. The caption reads: “The best example: awareness.”

Ludovic Franceschet has even caught the attention of the French government, which highlighted its commitment in a video.

On Twitter, another account, @EboueursdeParis, tells the daily lives of Parisian garbage collectors and emphasizes the value of their work, but in a more critical tone. The account condemns the “crackdown” introduced by the Paris City Council against users of this highly addictive drug, mainly located in the Stalingrad district.