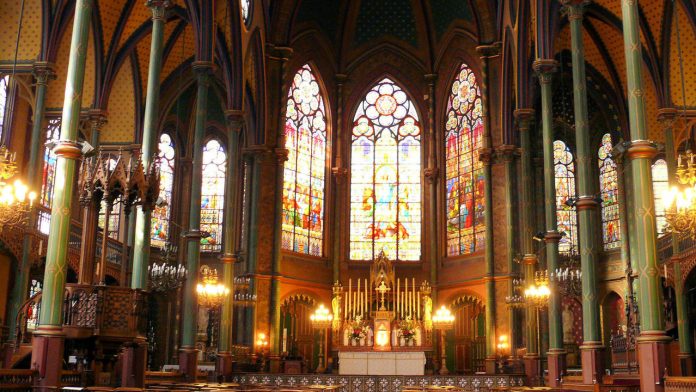 A priest and another priest were held for questioning on Thursday during a packed Easter mass held in Paris in violation of Covid’s restrictions, prosecutors said.

Church leaders and the government expressed indignation after pictures showed the cramped church of Saint-Eugene-Sainte-Cecile with few in the oldest congregation wearing masks.

The newspaper Le Parisien published a video of the service held on Saturday showing worshipers being packed, masks not being worn and priests directly placing communion slices in the congregation’s mouth.

It said the service had lasted for four hours.

Prosecutors in Paris quickly launched an investigation into allegations of deliberately endangering the lives of others.

They said on Thursday that the two men were also questioned about accusations that they were not wearing a mask and had gathered more than six people without respecting distance rules.

Deputy Interior Minister Marlene Schiappa this week called the massacres “unacceptable”, while Karine Dalle, spokeswoman for the Paris diocese, said she was “stunned” by the lack of social distancing in the service and “such disrespectful behavior”.

The rules stipulate that masks must be worn by all worshipers over the age of 11 with two seats left between each person or family group, as well as an empty pew between each row of people.

Separately, the Archbishop of Paris said on Wednesday that the church had initiated an internal procedure against the parish priest in Saint-Eugene-Sainte-Cecile, which could lead to sanctions.