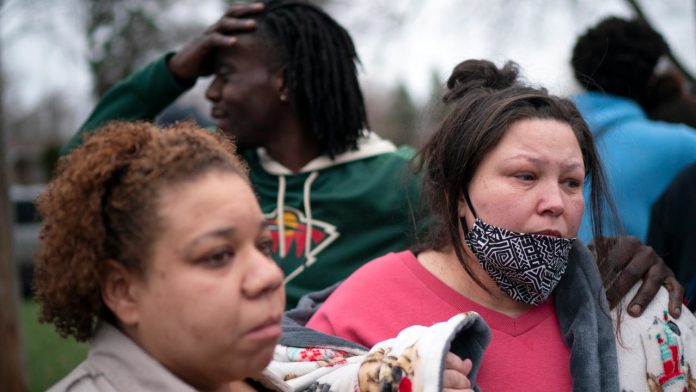 The policewoman who shot a 20-year-old black man in a suburb of Minneapolis accidentally confused his gun with his taser, police said on Monday, causing tensions in this city that was already at the forefront due to the murder process against George Floyd.

“The officer drew his gun instead of their taser,” Brooklyn Center Police Chief Tim Gannon told a news conference on Sunday’s fatal shot of Daunte Wright.

Gannon said it was his belief that the official, who has been placed on leave pending an investigation, “intended to distribute their tasers but instead fired Mr Wright with a single bullet.”

“This was an unintentional discharge that led to Mr Wright’s tragic death,” Gannon said. “There is nothing I can say to reduce the pain of Mr Wright’s family.”

Gannon showed reporters police body camera video of the shot, which sparked overnight protests in the Brooklyn Center and looting of a mall.

The video shows police pulling Wright out of his car after stopping him for a traffic violation and discovering he had an outstanding order.

As Wright fights with the cops and goes back to the driver’s seat in the car, a female cop shouts “I’m going to pamper you” and then “taser, taser, taser.”

“Holy shit, I shot him,” the officer says as Wright, mortally wounded, drives away.

The protests cost the defense attorney for former officer Derek Chauvin, who faces murder and death charges for George Floyd’s death, to ask the judge who presides over the high-profile case to dismiss the jury.

Eric Nelson, Chauvin’s lawyer, said he was worried that the protests over Wright’s death could affect the jury.

“A verdict in this case will have consequences,” Nelson said. “Will the jury be sure to make a decision regardless of the potential outcome of their decision?”

The prosecutors opposed the request to bind the jury and so did the judge.

“This is a completely different case,” said Judge Peter Cahill.

“I do not intend to bind them. We will bind them on Monday when I expect to close,” he said, referring to the closing arguments.

Chauvin faces murder and death charges for his role in Floyd’s death on May 25, 2020, which occurred during his arrest for allegedly passing a fake $ 20 bill.

The 45-year-old Chauvin, who is white, was seen in a video taken by a spectator who knelt on Floyd’s neck for more than nine minutes while the handcuffed 46-year-old black man complained several times that he could not breathe.

The video was about protests against racial justice and police brutality in the United States and around the world.

The Brooklyn Center, where Wright was shot, is a northwest suburb of Minneapolis that is not far from the heavily guarded Hennepin County Government Center where Chauvin is facing trial.

Police fired tear gas and flashes to disperse a crowd of hundreds of people gathered outside a Brooklyn Center police station after Wright was shot.

White House spokeswoman Jen Psaki said the Biden administration was “extremely saddened to hear of the loss of life from justice.”

“It is a reminder of the pain, anger, trauma, exhaustion that many communities across the country have felt,” says Psaki.

Jen Psaki on the police shooting of Daunte Wright in Minnesota: ‘It is a reminder of the pain, anger, trauma, exhaustion that many communities across the country have felt when we see these incidents continue to occur’ pic.twitter. com / 94c8Y3cYSa

John Harrington, Minnesota Commissioner for Public Safety, said about 20 companies were looted at a local mall and additional National Guard troops would be deployed on Monday.

Tensions in Minneapolis are already high over the Chauvin trial.

Prosecutors are trying to prove that Floyd’s death was due to the suffocation of police officers conducting the arrest and have called on several medical experts to strengthen their case.

Chauvin’s lawyer claims that Floyd’s death was due to his consumption of the illegal drugs fentanyl and methamphetamine and the underlying health condition.

Rich said Floyd’s death was caused by “low oxygen levels” that were “induced by the prone restraint and positional speed to which he was exposed.”

“I see no evidence at all that an overdose of fentanyl caused Mr Floyd’s death,” Rich said.