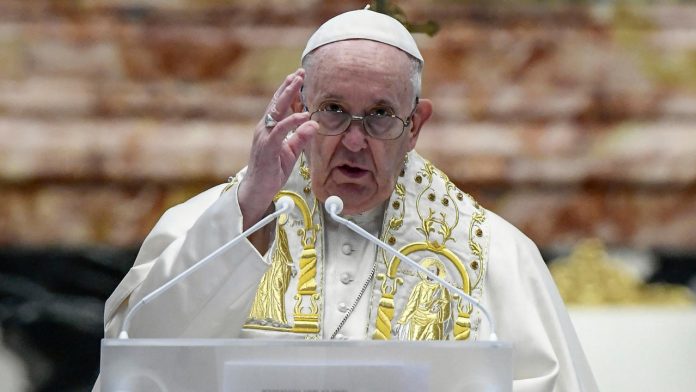 Pope Francis urged Catholics to remain hopeful in his Easter speech, calling vaccines an “important tool” to end the pandemic and urging their rapid launch into the world’s poorest countries.

On the holiest holiday for the world’s 1.3 billion Catholics and the second in the shadow of the coronavirus crisis, the pope focused his message on the world’s most vulnerable – the sick, migrants, people facing financial difficulties and those living in war zones such as Syria, Yemen and Libya. .

“The pandemic is still spreading, while the social and economic crisis remains serious, especially for the poor,” said the 84-year-old Argentine, speaking to a congregation of only about 100 people in the Great St. Peter’s Basilica.

“Vaccines are an important tool in this fight,” he said, urging the international community to overcome delays in the distribution of vaccines “especially in the poorest countries”.

Francis, who has focused on the situation of vulnerable groups since he became pope in 2013, had already warned rich nations against vaccination at an address to the UN General Assembly in September.

There are still too many wars and too much violence in the world! May the Lord, who is our peace, help us overcome the thinking of war. https://t.co/PsDVCzg2Kr

The pope said it was “scandalous” that armed conflict around the world had not stopped.

He called for an end to the war in Syria, “where millions of people are currently living in inhumane conditions” and in Yemen “whose situation has met with a deafening and scandalous silence”.

He also expressed his closeness to Myanmar’s youth – “committed to supporting democracy” – called for dialogue between Israelis and Palestinians and called for an end to violence in Africa, citing Nigeria, the Sahel, the northern Ethiopian Tigray region and Cabo Delgado in Mozambique. .

“There are still too many wars and too much violence in the world,” Francis said, adding that April 4 marked a day of awareness against landmines, “sneaky and horrible devices.”

The Pope’s Easter “Urbi et Orbi” (“To the city and the world”) message in the Vatican came when 60 million Italians spent the Easter weekend locked up.

The whole of Italy – the first country in Europe to be affected by the coronavirus – has been declared a high-risk “red zone” from Saturday to Monday, with restrictions on mobility and restaurants closed along with unnecessary retail.

Despite the gloom, there have been hopeful signs that vaccinations are increasing in pace, while the level of infection fell at the end of March – even though the emergency rooms are still under enormous pressure.

April will be a crucial month for Italy’s vaccination, with authorities hoping to administer 300,000 doses a day within two weeks, according to the country’s coronavirus commissioner, General Francesco Paolo Figliuolo.

Three regions, including the Veneto region which includes Venice, are also preparing to loosen their anticoronavirus rules from Tuesday onwards and move from the most restrictive “red” zones to “orange”.