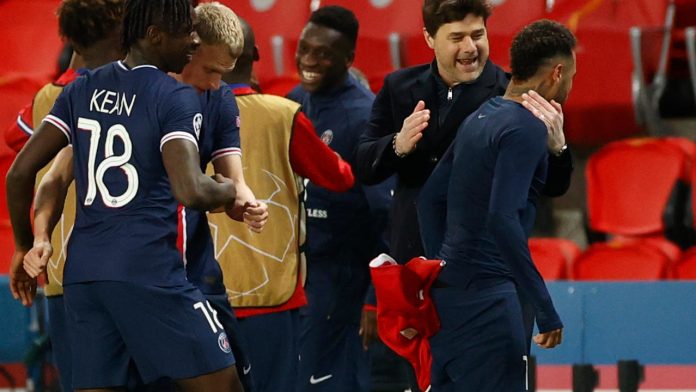 Paris Saint-Germain knocked Bayern Munich out of the Champions League on Tuesday despite Eric Maxim Choupo-Moting scoring against his old club as a 1-0 defeat in the second leg of the Parc des Princes could not stop the French giants from winning a huge quarter-final draw on away goals.

Neymar hit the target twice for PSG in the first half and Choupo-Moting then put Bayern in front five minutes before the break.

But the reigning European champions could not get the second goal they needed after losing 3-2 at home in the first stage last week.

Hansi Flick’s team is out and PSG avenges after their 1-0 defeat in last season’s final in Lisbon.

The dream of winning a first European Cup remains for the Qatar-owned club and Mauricio Pochettino’s team, which had already eliminated Barcelona in the 16s, can now look forward to a semi-final match with Manchester City or Borussia Dortmund.

Bayern must take comfort in trying to win a ninth Bundesliga title in a row and will wonder what could have been if the productive Robert Lewandowski, or Serge Gnabry, had been available for the two legs in this tie.

Flick’s future will also come back into focus, given his frosty relationship with the club’s sports director, Hasan Salihamidzic.

Still, Bayern played more than one role in an epic tie that will live long in the memory and that deserved to be played in front of a full house both in Munich and here.

They were also without influential midfielder Leon Goretzka for this second stage, and they had almost no Champions League experience on their bench either.

Their starting lineup was still impressive, and with Thomas Mueller leading from the front and coordinating his stifling pressure, Bayern took the game to their hosts all the time.

It suited PSG, who have produced their best performances this season at home and can look to beat the Germans at the break with the devastating pace of Kylian Mbappe.

The Parisians, to be fair, lacked two great players of their own in captain Marquinhos and playmaker Marco Verratti, but they had Mbappe and Neymar.

The Brazilian was in the mood but was left frustrated by a combination of Manuel Neuer and the goal frame during the first half.

Twice the Bayern goalkeeper produced saves to deny Neymar before the world’s most expensive player struck a fantastic shot from the crossbar and long post in the 37th minute after Angel Di Maria’s free kick was cleared for him.

In the 39th minute, another break ended with Mbappe squaring against Neymar, who this time saw his attempt to hit the base on the right post.

Bavaria could have been dead and buried, but within a minute of that they arrived at night.

Thomas Mueller’s subdued dismissal in the box set up David Alaba for a first shot that Keylor Navas saved. The ball bounced off Choupo-Moting and he nodded in.

The Cameroon striker, who played once in ten Champions League matches in two seasons at PSG, now had his second goal against his old club in this tie while standing in Lewandowski.

Bayern could even have scored again before the break when a roaring strike from Alaba was turned around by Navas, which kept PSG everywhere on away goals.

A goal for the home team would have calmed the nerves as they looked to avoid another dramatic exit from the Champions League like so many earlier in the last decade.

Neymar stretched but just could not connect to Di Maria’s ball over the goal at the beginning of the second half.

PSG lost left-back Abdou Diallo to injury and Bayern continued to push them back and accepted the risk of letting in when looking for a crucial second goal.

Mbappe had an effort not allowed for offside, while another Bayern goal never came, and the last whistle was met with loud noises of joy from the home bench.