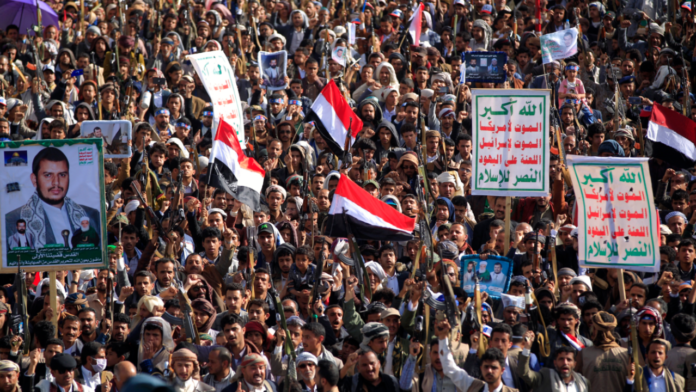 Thousands marched through the Yemeni capital, Sanaa, on Friday to mark the sixth anniversary of Saudi Arabia’s military intervention against Huthi rebels, as the UN calls for a ceasefire.

The Iranian-backed Huthis surpassed Sanaa in September 2014 and continued to capture most of the country before a Saudi-led coalition intervened in March 2015 to strengthen the government.

Since then, tens of thousands of people have been killed and millions displaced, according to international organizations, in what the UN calls the world’s worst humanitarian crisis.

On Monday, Saudi Arabia offered the Huthis a “comprehensive” UN-monitored ceasefire to try to end the brutal conflict, but the rebels have dismissed the initiative as “nothing new”.

“If they want peace, they must stop their aggression and end the blockade imposed on the Yemeni people,” senior Huthi official Deif Allah al-Shami told AFP alongside Friday’s meeting.

“We need no initiative,” he said, referring to the Saudi peace offer.

Around him, Huthi’s supporters held pictures of rebel leader Abdul Malik al-Huthi, Yemeni flags and signs reading “death to America, death to Israel, curse on the Jews, victory to Islam”.

Huthi security forces, masked and in military uniforms, were deployed in Sanaa for the rally, where many protesters swung their weapons or raised clenched fists as they shouted slogans against Saudi Arabia.

A few hours earlier, a projectile attack triggered a fire at an oil terminal in southern Jizan province in Saudi Arabia, the country’s energy minister announced without saying who was behind the attack.

And on Thursday, the Saudi coalition said it was intercepting several explosive-laden drones firing at the Huthi Empire.

The rebels, who have recently escalated attacks on the oil-rich neighborhood, including its energy facilities, claimed responsibility for the Jizan attack in a video.

Saudi Arabia’s offer of a ceasefire was the second since last year.

“They discussed the urgency of agreeing to open Sanaa Airport and … enter a nationwide ceasefire and resume UN-led political dialogue to pave the way for lasting peace,” Griffith’s office said in a tweet.

The talks were also about “easing the restrictions on Hodeida”, the port of the Red Sea which is a lifeline port for food, fuel and humanitarian aid to Yemen.

The Huthis have demanded the lifting of a Saudi air and sea blockade that the coalition says it introduced to prevent arms smuggling to the rebels from Iran – accusations Tehran denies.

The Saudi ceasefire and the UN’s efforts to find a solution come when the US government is also pushing President Joe Biden to try to end the conflict.

Washington’s special envoy for Yemen, Tim Lenderking, visited the region last month and also contacted the Huthis in Oman, sources told AFP. He is set to return to push for a ceasefire.

On Friday, the United States condemned the latest attack on Saudi oil infrastructure, saying the strikes “are a clear provocation intended to perpetuate the conflict”.

“Huthi’s actions jeopardize peace efforts at a critical moment as the international community increasingly unites behind a ceasefire and a solution to the conflict,” State Department spokesman Ned Price said in a statement.

Analysts have said that Riyadh’s ceasefire offer is an attempt to portray the rebels as aggressors while the kingdom seeks an exit from the military swamp.

With no quick fix in sight, the UN humanitarian agency OCHA on Friday lamented the consequences of a six-year war in Yemen in a series of tweets.

“Yemen is desperate for peace and now it is time for everyone to act,” OCHA added with the hashtag “#YemenCantWait”.

The famine could become part of the country’s “reality” in 2021, UN chief of development program Achim Steiner told AFP earlier this month after a donors’ conference raised $ 1.7 billion in support of Yemen – half of its target.

More than 16 million Yemenis will be starved this year, and nearly 50,000 are already starving in starvation-like conditions, according to the latest UN figures.

About two-thirds of Yemen’s 29 million people depend on some form of survival assistance.