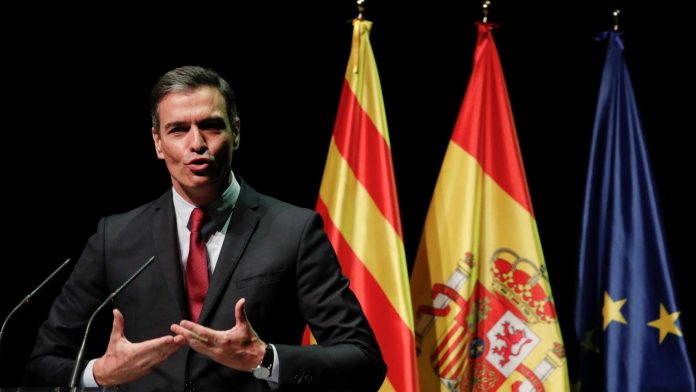 Spanish Prime Minister Pedro Sanchez said his government would pardon the nine imprisoned leaders of Catalonia’s failed 2017 independence bid on Tuesday as a first step towards ending the political conflict over the rich region.

As he spoke at the Barcelona Opera House, several hundred separatists protested outside demanding further concessions, and a member of the audience interrupted him for a few seconds and shouted “Independence”.

“I am convinced that getting these nine people out of prison… sends a clear message of unity,” Sánchez said Monday at the event in the region’s capital, which was attended by about 300 members of the Catalan civil society. midfield.

“Catalonia, Catalans we love you,” Sanchez said in Catalan at the end of his speech, with the Spanish, Catalan and EU flags behind him.

Polls show that about 60% of Spaniards oppose the release of politicians convicted of their role in an unauthorized independence referendum and short-lived declaration of independence. Madrid responded at the time by imposing direct control over the region from 2017-2018.

‘2/3 of Spaniards are against pardon’

But Sanchez is betting that now is the time for a political gamble that he hopes will eventually cement his legacy, weaken independence pressures and resolve the country’s worst political crisis in decades.

“We do not expect those seeking independence to change their ideals, but we expect (they) to understand that there is no path outside the law,” Sánchez said at the event.

The cabinet’s next chance to ratify the pardon will come at Tuesday’s meeting, which should lead to the separatists’ release from prison a few days later.

Sanchez wants to ease tensions in the northeastern region and initiate negotiations between the central government and the Catalan authorities.

“To come to an agreement, someone has to take the first step. The Spanish government will now take that first step,” he said. The social costs of simmering the conflict were too high, he added.

Catalonia’s separatist head of government, Pere Aragones, last week told Reuters that the pardon would be a welcome first gesture to start a dialogue, but deemed it insufficient and demanded amnesty for all involved in the 2017 events, which about 3,000 people could benefit.