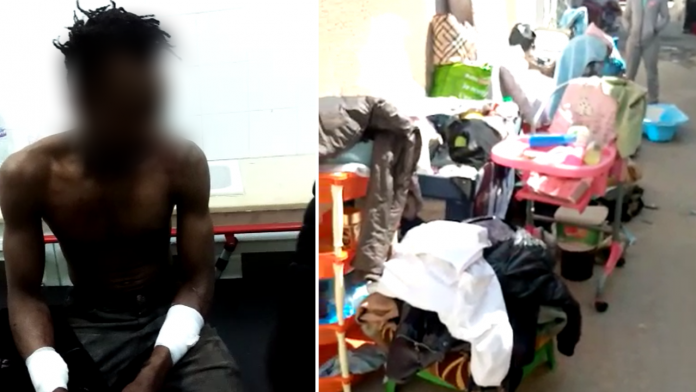 Migrants south of the Sahara in Tunisia have been targeted by a wave of knife attacks, say migrant groups that have been posting about the ongoing attacks since March 25. Several migrants say they were attacked in the Kram and La Soukra districts, north of Tunis, the capital. They want the Tunisian authorities to give them more protection.

A series of photos published on social media since March 25 show the victims of these attacks. In some pictures they are still bloody. In others, they have bandaged arms or compresses on their heads. The captions to these images explain that these people were all victims of a series of targeted knife attacks on migrants from sub-Saharan Africa in the La Soukra and Kram districts of Tunis, the capital of Tunisia.

This Facebook post, published on March 30, 2021, talks about a wave of attacks on people from sub-Saharan Africa living in Tunis. The France 24 Observators team could not confirm all these incidents.

“Here they do not respect black migrants”

Jowharobservers spoke to Amadou, an immigrant from Mali who has been living in Dar Fadhal (La Soukra) for the past nine months. He says his landlord kicked him out and then sent a group of men after him. Amadou was attacked by these unknown individuals:

It was around 8pm on Friday when my landlord came and knocked on my door. I was asleep. He wanted to check that the apartment was clean, especially the windows which he thought were dirty. But I told him that the windows were already in that condition when I moved in.

The discussion became very fast. He broke down the door and a fight started. He hit me several times but I did not let him take me over. That was when a group of people armed with knives came to defend him. One of them broke an empty bottle over my head. That’s how I ended up in the hospital.

When I returned, I saw that all my belongings – and my roommates – had been thrown out. We lived seven in the apartment, including a newborn baby. Here, people do not respect black migrants. Landlords are abusing us. It’s racism.

Jowharobservers contacted Amadou’s landlord, who claimed that several local men came to his rescue when Amadou and two of his roommates beat him.

“I just wanted to see if my apartment was kept in good condition. I thought I rented the apartment to four people. But there were almost eight people there. I did not send anyone to beat them. It was they who beat me. ”

Several assaults and robberies of people armed with knives were also reported in Kram on December 5, Avenue, where many sub-Saharan migrants live. It is a place where rent is often cheap.

“They had knives and they wanted to stab us”

Mamadou, originally from Ivory Coast, has lived on Avenue December 5 for several years. He said he and his brother were attacked on Monday, March 29, by “Arabs” who wanted to steal his phone.

They had knives and wanted to stab us. Thankfully, they could not pick up our phones. It feels like only black people are being attacked or robbed in our neighborhood.

Every day, young Arab criminals carry out attacks in these neighborhoods. They attack both men and women. They steal our phones and our wallets. Living as a paperless person in Tunisia is already not easy. We are really angry about the situation.

Jowharobservers contacted Ange Seri Soka, President of the Union of Ivorians in Tunisia. He condemned the “racist and targeted” attacks and the failure of the security forces to act.

Attacks on sub-Saharan Africans living in Tunisia are becoming more frequent. We have recorded an assault every other day by a criminal or a robbery. And the police do nothing to change things.

We do not feel safe. And those who attack us have complete impunity. In Kram, the attackers are particularly dangerous.

It is injustice that we are facing in Tunisia. There is no respect for human rights. No one respects people from sub-Saharan Community here.

Even our own embassies do not protect us. There are many undocumented migrants in our society. Obtaining a residence permit here in Tunisia is not easy. And that makes us even more vulnerable to abuse. Because many people are afraid to go to the police to seek justice.

The authorities need to give us more protection because migrants also contribute to economic development in Tunisia.

We contacted the police in both Kram and La Soukra but they did not answer our questions.

In December 2018, Falikou Coulibaly, the president of another Ivorian group, the Association of Ivorians in Tunisia, was killed for his mobile phone. The assassination sparked outrage among sub-Saharan African communities and led to a series of protests in the Tunisian capital.