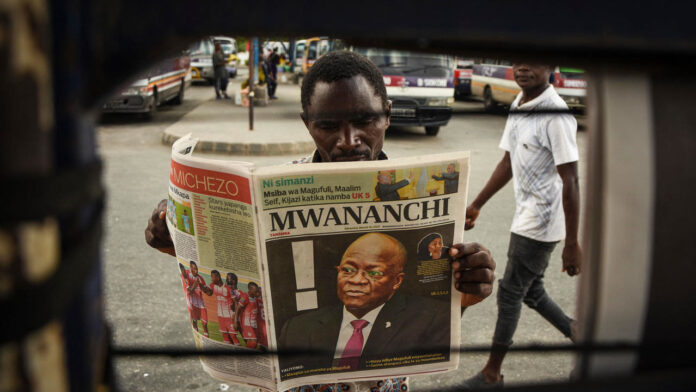 Tanzania was thrown into mourning on Thursday after the death of President John Magufuli, a corrupt “people” whose swing to authoritarianism and the dismissal of the coronavirus pandemic leaves a fragmented legacy.

Flags flew in half mast in the capital Dar es Salaam when the country began a 14-day mourning period for the man nicknamed “Bulldozer”.

Magufuli, 61, died of what the authorities said was a heart disease, after a long absence that drove rumors that he had contracted coronavirus.

Kenyan President Uhuru Kenyatta, the current head of the East African Community bloc, said Africa had lost a “brilliant” leader and ordered a seven-day period of mourning in its country.

Ethiopia, Britain and the United States also sent condolences, and Washington said “we hope Tanzania can move forward on a democratic and prosperous path.”

However, opposition leader Tundu Lissu, who was shot 16 times in a 2017 assassination attempt and deported to Belgium, described Magufuli’s death as “poetic justice” and insisted that his sources said he had undergone Covid-19.

“What should I say? It is poetic justice. President Magufuli defied the world against the fight against the corona (…) He defied science,” he told AFP.

Lissu added: “What happened, happened. He went down with the corona.”

Prayers instead of masks

Magufuli came to power as a corruption-breaking man of the people, but for many observers, his handling of the pandemic threw his leadership style into sharp relief.

The devout Christian claimed that the faith had saved the country from Covid-19, fought prayers over face masks and prevented the publication of virus figures.

But in February, the cases rose so much that the church, schools and other public institutions openly warned of the spread of the virus.

Then the first vice president of the semi-autonomous Zanzibar, Seif Sharif Hamad, died after his political party admitted that he had the coronavirus.

Under increasing pressure, Magufuli seemed to acknowledge the existence of the virus.

“When this respiratory disease broke out last year, we won because we put God first and took other action. I’m sure we will win again if we do it this time,” he said.

“We will all die, whether with this disease or malaria or anyone else,” Magufuli added. “Let’s go back to God, maybe we’ve messed up somewhere.”

Magufuli was first elected in 2015 in a fiery corruption scandal that left him a population tired of graft scandals.

He quickly made very popular decisions, such as scrapping lavish independent parties in favor of street cleaning and banning unnecessary trips abroad for officials.

Several headline incidents saw him appear in person to demand why officials were not at their desks, while in one case, officials were briefly jailed for being late.

But his tendency to complicate due process and act on a whim frightened foreign allies over the pressure of democracy in one of East Africa’s most stable nations.

His re-election in October last year was dismissed as a hoax by the opposition and diplomats.

It took place during an oppressive military presence after breaking with the opposition and blocking foreign media and observer teams.

Under his rule, a series of harsh media laws were passed while the arrests of journalists, activists and opposition members increased and several opposition figures were killed.

Magufuli demanded that teenage mothers be kicked out of school, while rights groups cracked down on unparalleled violence against the LGBT community under his rule.

Magufuli’s supporters praised his counter-corruption, energetic infrastructure drive and an upheaval in the mining industry that saw him renegotiate contracts with foreign companies to improve the country’s share of its own resources.

He expanded free education, increased electrification in rural areas and began building a key railway and a massive hydropower dam that would double electricity production in the country.

“I know what it means to be poor,” said the late leader, who grew up in a grassy home and kept livestock and sold milk and fish to support his family in the northwestern district of Chato, on Lake Victoria.

Magufuli was a member of the ruling Chama Cha Mapinduzi (CCM) party, which has been in power since independence from Britain in the early 1960s.

Since 1995, he was a member of parliament and had various cabinet portfolios, including livestock, fishing and public works, where he served the moniker “Bulldozer”.

He is survived by his wife and five children.