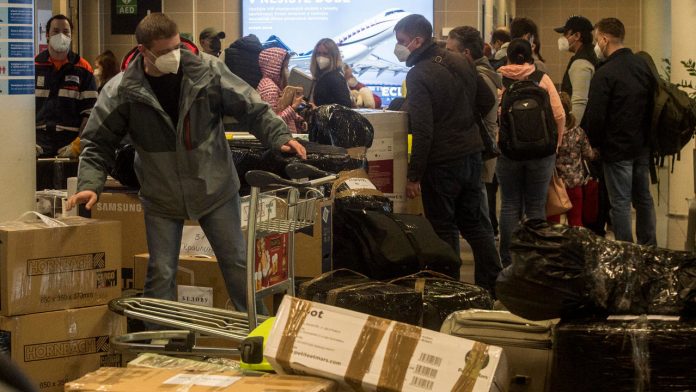 The Czech Republic has asked its EU and NATO partners to expel Russian diplomats in solidarity following a diplomatic spit between Prague and Moscow, a day after Ukraine called on the EU to extend economic sanctions against Russia over renewed tensions in eastern Ukraine and Crimea.

Czech Foreign and Foreign Minister Jan Hamacek said on Tuesday that he would call on the Russian ambassador on Wednesday to reveal further steps following the deportation of 18 Russian diplomats whom Prague considered secret agents and 20 Czechs from Moscow in retaliation.

“We call for collective action by the EU and NATO countries in order to show solidarity,” Hamacek told reporters.

The call comes after Prague accused Russian intelligence services of orchestrating a deadly explosion on Czech territory in 2014.

Eighteen Russian diplomats identified by the Czech intelligence service as spies left their posts on Monday, along with 20 Czech diplomats based in Moscow.

Hamacek said he had called Russian Ambassador Alexander Zmeyevsky until Wednesday afternoon to protest what Prague sees as a disproportionate response.

Referring to an intelligence report, the Czech government has said that Russia’s military home service GRU orchestrated two explosions in 2014, one of which killed two people and caused extensive material damage.

In connection with the explosions, the Polish police are looking for two men who were also identified as suspects in the 2018 poisoning of the former Russian double agent Sergei Skripal in Salisbury, England.

“Spark” could give rise to the Ukraine collision

Ukraine’s Foreign Minister Dmytro Kuleba said on Tuesday that Russia would soon have more than 120,000 troops on Ukraine’s border and called for new Western economic sanctions to deter Moscow from “further escalation”.

“Sectoral sanctions are a matter of time and Russia’s behavior. From my recent interactions with German and French foreign ministers, I can conclude that they understand this reality, “Kuleba told an online conference with international media.

He said Ukraine wanted a diplomatic solution to renewed tensions with Moscow over eastern Ukraine and Crimea, which the Kremlin attached in 2014, but added that Russian Foreign Minister Sergei Lavrov had rejected a request for talks.

In a grim assessment of the EU’s relations with Moscow after a virtual meeting with EU foreign ministers on Monday, the bloc’s foreign policy chief Josep Borrell said that in the face of Russia’s military build-up near Ukraine’s borders, it would only take “a spark” to start a confrontation. .

He said, however, that despite developments, “at present there is no move in the area of ​​more sanctions” that can be imposed on Russia.

He also said that the condition of the imprisoned Russian opposition leader Alexei Navalny was “critical” and that the 27-nation group would hold the Kremlin responsible for his health and safety.

Several doctors were prevented on Tuesday from seeing Russian opposition leader Alexei Navalny in a prison hospital after his three-week hunger strike, and prosecutors reported a sweeping, new case against his organization.

Navalny was transferred on Sunday from a penal colony east of Moscow to a prison hospital in Vladimir, a city 180 kilometers east of the capital, after his lawyers and staff said his condition had deteriorated dramatically.

His personal physician, Dr. Anastasia Vasilyeva, led three other medical experts to try to visit Navalny at the prison clinic and IK-3 prison in the city of Vladimir. They were denied entry after waiting for hours outside the gates.

Navalny, Russia’s president Vladimir Putin’s strongest opponent, has been on hunger strike since March 31 to protest against prison officials’ refusal to allow his doctors to visit him and provide adequate treatment for back pain and leg numbness.

Russia’s prison service insists that Navalny receive all the medical help he needs.

The prison service said in a statement on Monday that Navalny’s condition was considered “satisfactory”, but another of his doctors, Dr. Yaroslav Ashikhmin, said over the weekend that test results from his family show that Navalny has greatly elevated levels of potassium, which can cause cardiac arrest, as well as elevated creatinine levels that indicate impaired kidney function.

Navalny was arrested in January when he returned from Germany, where he had spent five months resuming nerve-racking poisoning, which he blames on the Kremlin – an accusation denied by Russian officials.

Navalny’s arrest sparked the biggest protests seen in Russia in recent years. In February, a Moscow court ordered him to serve 2 years in prison for a 2014 embezzlement conviction that the European Court of Human Rights considered “arbitrary and manifestly unreasonable”.