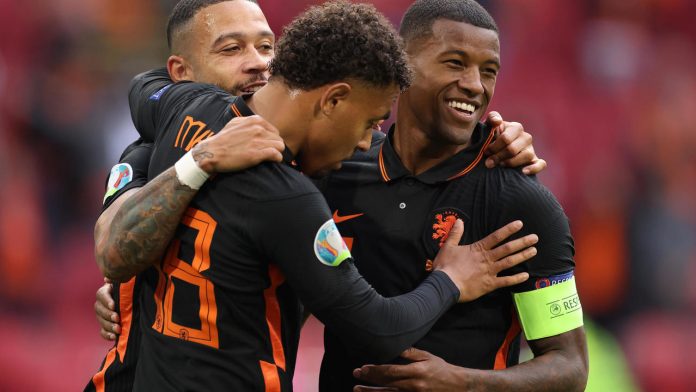 Georginio Wijnaldum scored twice as the Netherlands rounded out a perfect group stage at Euro 2020 by comfortably beating North Macedonia 3-0 on Monday in Amsterdam, while Austria in the same group defeated Ukraine 1-0.

The Dutch captain, who signed for Paris Saint-Germain from Liverpool just before the start of the tournament, scored twice in the Johan Cruijff Arena in the second half after Memphis Depay gave them the lead.

Depay, who had just completed a transfer to Barcelona, ​​could claim assists for both of Wijnaldum’s goals, as Frank de Boer’s side took nine points out of nine in Group C.

They had already secured qualification to the last 16 as group winners after beating Ukraine and Austria in front of their own fans at the home of Ajax, and so the 1988 European champions knew they were on their way to a draw in Budapest next weekend. .

North Macedonia, meanwhile, had already been eliminated after losing their first two matches on their major tournament debut.

They crash without a point, but they will never forget this campaign and this match will be best remembered as the last of 37-year-old striker Goran Pandev’s international career after two decades.

He was handed a Dutch shirt numbered 122 – the number of caps he has won – before kick-off, and received a guard of honor from his teammates and an ovation from the home fans when he was substituted midway through the second half.

But the North Macedonians failed to sign off on a high, with Pandev setting up Aleksandar Trajkovski for a shot from the post when the game was still scoreless.

They had also disallowed two goals for offside and thought the Dutch opener should not have been allowed in the 24th minute.

Pandev sensed a foul on the edge of the Dutch penalty area by Daley Blind, but the Romanian referee allowed play to continue and the home side broke forward.

Depay exchanged passes with Donyell Malen before the finish and the goal stood after a VAR check.

PSV Eindhoven striker Malen and Ajax midfielder prodigy Ryan Gravenberch came in for Wout Weghorst and Marten de Roon as the only two changes De Boer made to the Dutch line-up.

He stuck to his much-criticized 3-5-2 setup – before adjusting it in the second half – but was reluctant to give too many players a break for six days after that until their next game.

The Netherlands was dressed in a black exchange kit and received VIP support in the form of Prime Minister Mark Rutte, who watched the match together with his North Macedonian counterpart Zoran Zaev.

And despite the cold and damp conditions, the evening had the air of a relaxed farewell for the Dutch side, who will play no more games in Amsterdam – victory in the last 16 will send them to a quarter-final in distant Baku.

Denzel Dumfries came close to making it 2-0 after Depay’s opener before taking the lead early in the second half.

Matthijs de Ligt had a header off the line before Depay squared for Wijnaldum to make it 2-0 six minutes into the second period.

Another delightful move brought in the third goal just before the hour when Malen’s pass found Depay whose shot was saved by Stole Dimitrievski, only for Wijnaldum to convert the follow-up to his third of the tournament.

Weghorst then hit the bar within moments of coming off the bench and the Netherlands are looking good, albeit with tougher tests ahead.

Austria participates in first ever knockout round

Christoph Baumgartner put Austria into the knockout stages of the European Championship for the first time by scoring the only goal in his team’s 1-0 win over Ukraine on Monday.

Baumgartner knocked out a corner from Austrian captain David Alaba in the 21st minute, just four minutes after colliding head-on with Illia Zabarnyi on the other side of the pitch.

Baumgartner was then substituted in the 32nd minute and held his head as he left the field.

Austria finished second in Group C with six points and will face Italy in London on Saturday. Ukraine is third on three points and can still qualify for the round of 16 as one of the top four teams in third place.

Alaba has played in the middle of a back three in previous games, but on Monday he stood as a left-back in a four-man defense line, supporting the attack with well executed crosses and corners from both sides.