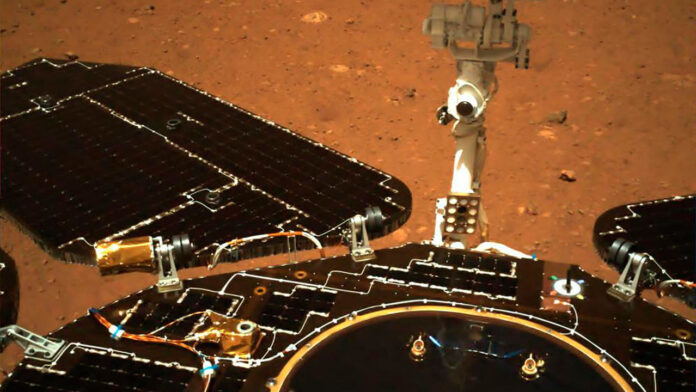 Solar panels against an alien landscape, slopes and rods pointing to the horizon of Mars – China’s first probe on the Red Planet has beamed back its first “selfies” after its historic landing last week.

The Zhurong rover was carried into the atmosphere of Mars in a lander on Saturday, in the very first successful probe to land through a country during its first Mars mission.

Named after a mythical Chinese fire god, Zhurong arrived a few months after the last probe from the United States to Mars – Perseverance – and was celebrated in China as a milestone in his rise to superpower status in space.

The China National Space Administration on Wednesday released the images taken with cameras attached to the rover that show the obstacle-avoidance equipment and solar panels on the vehicle, as well as the texture of the surface of Mars.

We have a Hi-Res visual! This is #Zhurong (# Tianwen1) Mars Rover reporting to Earthlings! I am currently on 109.9E, 25.1N, Utopia Planitia, Mars. They all look good! Preparation for final deployment and scientific missions. Water / ice under Mars surface 100 meters deep? About to find out! pic.twitter.com/xkh39C2y3n

“People from the internet, the Mars images you longed for are here,” the space agency said in a social media post with the images.

The rover’s landing was a nail-biter for Chinese space engineers, with state media describing the process of using a parachute to slow descent and buff the legs as “the most challenging part of the mission.”

It is expected to spend about three months there taking photos and collecting geographic data.

China has come a long way in its race to overtake the United States and Russia, whose astronauts and cosmonauts have decades of space exploration experience.

It successfully launched the first module of its new space station last month in hopes of having it manned by 2022 and eventually sending humans to the moon.