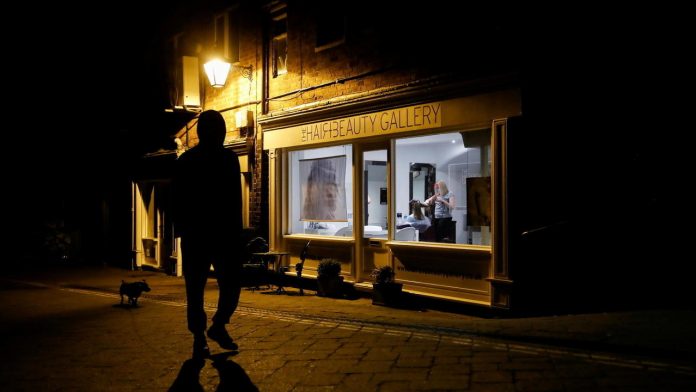 The UK took another preliminary step towards resuming normal life on Monday, as pubs and restaurants were allowed to partially reopen, in a major easing of coronavirus restrictions.

English pubs and restaurants can now serve drinks and dinners outside, despite forecasts of winter temperatures, which encourages the hard-hit hotel industry after repeated closures.

“It’s going to be great to see everyone again and see all the locals,” Louise Porter, a landlady at The Crown Inn in Askrigg, northern England, told AFP.

Barbers and hairdressers can also reopen, where demand for long delayed trims is high more than three months after the latest home order was introduced.

A wave of customers is expected in stores in the non-essential retail sector as outlets try to recoup large Covid losses.

Indoor gyms, swimming pools, libraries and zoos have also managed to open their doors, as have domestic self-catering holidays, where bookings have increased.

Mosques are preparing during the beginning of Ramadan this week, a year after the Muslim holy month was observed without traditional gatherings.

The resumption of Ramadan prayers, even with some social distancing measures, could give worship “renewed optimism,” said British Muslim Council Secretary-General Zara Mohammed.

Prime Minister Boris Johnson called the easing of restrictions “a major step forward in our roadmap for freedom”.

“I’m sure it’s going to be a great relief for the entrepreneurs who have been closed for so long, and for everyone else it’s a chance to come back to do some of the things we love and have missed.”

Johnson had promised to toast the latest relief with a festive pint at a pub beer garden – a year ago the day he left the hospital after receiving Covid-19.

The emphasis is still on outdoor activities to prevent the spread of the virus through close contact indoors.

Government ministers, researchers and health authorities warn the public against complacency, even after more than 60 percent of adults have received a first dose of a Covid vaccine.

“The modeling, which is now pretty good, shows that we can expect some kind of rebound,” he told Times Radio on Sunday.

“It’s not clear exactly when or how big it will be, but I think it will inevitably be a bit of a rebound in the number of cases when things are relaxed,” Horby said.

Ministers and researchers are knocking out vaccinations to prevent more serious cases of Covid-19 requiring hospital treatment following a sharp increase in infections – and deaths – at the end of last year.

The UK has registered more than 4.3 million positive cases since the outbreak began and over 127,000 deaths – one of the worst tolls in the world.

The British economy has also been destroyed by a year of forced closures and restrictions, which has led to the consideration of new measures to ensure that companies are open in the future.

One possibility is so-called “vaccine passes”, but it has sparked debate over whether they should be effective or implemented – and the consequences for civil liberties.

There is also increasing pressure for a decision to resume unnecessary international travel, with Britons keen to book foreign holidays.

Johnson has said the government will be driven by data, not dates, in its reopening plan, with the next expected relief due on May 17.

All social restrictions are scheduled to be lifted on June 21.

Scotland, Wales and Northern Ireland, whose decentralized administrations set their own health policies, are implementing less extensive easing of restrictions.