Home WORLD NEWS The UN chief of rights fears that Myanmar may be heading for...
Facebook
Twitter
WhatsApp
Linkedin
LINE 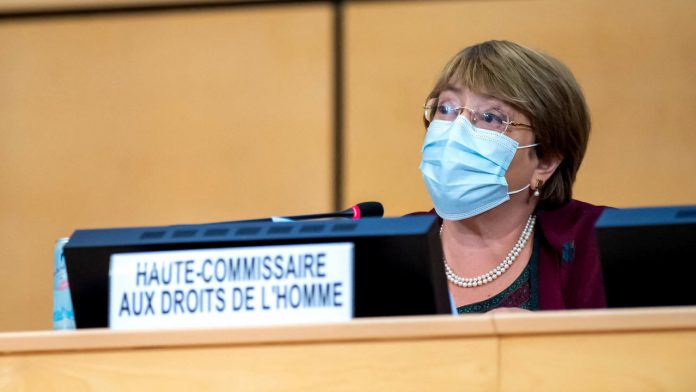 The UN High Commissioner for Human Rights warned on Tuesday that Myanmar could face a “full-blown” Syrian-style conflict, following a two-month operation that a local monitoring group says has already claimed more than 700 lives.

Myanmar is in chaos and its economy has been paralyzed since the military seized power from civilian leader Aung San Suu Kyi on February 1.

Warning of possible crimes against humanity, UN High Commissioner for Human Rights Michelle Bachelet on Tuesday called on countries to take immediate action to drive the Myanmar military to stop its “campaign of repression and slaughter of its people.”

Daily meetings across Myanmar have been met with live rounds.

At least 710 civilians were killed by the end of Monday, including 50 children, according to a local monitoring group.

“I am afraid the situation in Myanmar is heading for a complete conflict,” Bachelet said in a statement.

“There are clear echoes of Syria in 2011,” she warned, referring to the start of a civil war that has killed nearly 400,000 people in the past decade and forced more than six million to flee the country.

In recent weeks, several of Myanmar’s ethnic rebel groups in certain lawless border areas have intensified attacks on the military and police, raising concerns about a broader civil conflict.

The military has retaliated with air strikes, which Free Burma Rangers – a Christian aid group working in the area – said has driven more than 24,000 civilians into Karen State by Saturday.

Rangers, which runs a state-run health clinic, said airstrikes had killed at least 20 people and injured more than 40.

The area is remote and communication is difficult, and AFP has not been able to verify the deaths independently.

Villagers in some areas could not prepare their rice crops for fear of the military shelling them in their fields, the aid group said.

“They are afraid that they will not have a rice harvest next autumn,” it said in a statement.

Military attacks sent several thousand people fleeing to neighboring Thailand in recent weeks, but most have returned to Myanmar’s side of the border.

In Yangon, authorities are chasing those responsible for an underground newsletter entitled “Molotov”.

The publication was started by a group of young activists to combat ongoing internet outages and information suppression.

“Molotovsky magazine is being published illegally,” the state-run Global New Light of Myanmar said, adding that legal action would be taken against those involved.

In a military court in the city, seven protesters accused of the murder of a suspected informant were sentenced to death, state media said on Tuesday. Three of the protesters were tried in absentia.

The junta also announced on Tuesday that dozens more people had been added to an arrest warrant list of 260 celebrities, doctors and ordinary citizens.

Many are accused of spreading disagreements against the military, while medical staff are being asked about their work at private clinics, which have taken in injured protesters, according to state media.

Meanwhile, in the northwestern Sagaing region, a couple were killed while delivering milk after junta troops stormed the city of Tamu, according to the Assistance Association for Political Prisoners (AAPP), a local surveillance organization.

With violence raging, many in coup-hit Myanmar promise to mark this week’s Buddhist New Year’s festival with protests rather than the traditional water battles.

Some protesters say it would be disrespectful to enjoy the holiday season in Thingyan when so many have lost their lives and about 3,000 people are being held.

Last year’s festivities were also suspended due to pandemic restrictions.

In parts of Yangon, Monywa and Bago, protesters observed Thingyan on Tuesday by painting pots of pro-democracy messages and placing them on streets with flowers inside.

“Fight for democracy,” said a sign sticking out of a row of pots in a Yangon neighborhood.

Others said, “Never give up.”

“We do not have normal celebrations. Even though it is festival time right now, we can not have fun. We will not be happy until this dictator is overthrown and we will rebel until then,” a university student in Mandalay told AFP. further spoke of conditions for anonymity due to the risk of arrest.

Another protester named Ray in Yangon said the pots were a way to welcome the new year and “honor fallen heroes.”

In Mandalay, people placed the pots and flowers on a golden stupa, with signs showing the three-fingered greeting that has become a symbol of resistance.

Young people in cities across the country continued to take to the streets on Tuesday, some marching with flower pots.