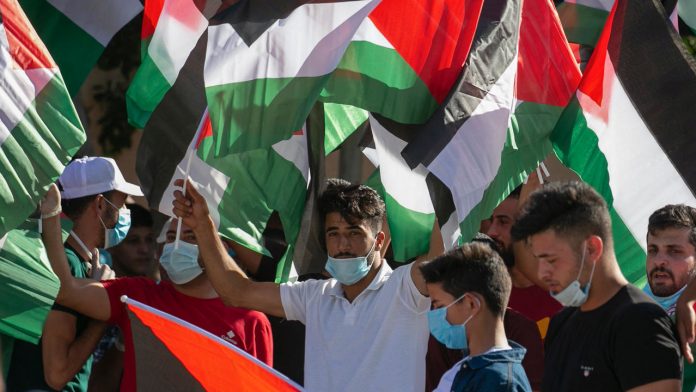 The Biden administration said on Wednesday that it had resumed US aid to the Palestinians, including the UN agency, which handles Palestinian refugees, almost all of whom had been eliminated by former President Donald Trump.

The Foreign Ministry announced that it would provide a total of $ 235 million for projects in the West Bank and Gaza, as well as for the United Nations Relief and Works Agency, or UNRWA. The administration had previously announced $ 15 million for the Palestinians to fight the coronavirus pandemic. The resumption of assistance has raised concerns in Congress from pro-Israel lawmakers who say the money could violate US law.

The Associated Press has previously reported that the administration informed Congress of its intention to increase support for the Palestinians, but until Wednesday it had not publicly acknowledged any assistance other than that for COVID-19. The new aid comes when the administration cements a new Mideast policy that in many ways is directly opposite to the one that Trump is pursuing.

“The United States is pleased to announce that, in cooperation with Congress, we plan to restart US economic, development and humanitarian aid to the Palestinian people,” said Foreign Minister Antony Blinken in a statement. He said the money includes $ 75 million in financial and development aid in the West Bank and Gaza, $ 10 million for peacebuilding programs and $ 150 million for UNRWA.

We are pleased to announce the resumption of US assistance to the Palestinian people. It will provide important humanitarian aid and promote regional prosperity and stability, while promoting American values ​​and interests. https://t.co/nQSWvRKxA3

Blinken tried to prevent criticism of Congress by saying that “all aid will be provided in accordance with US law”, but Republican members of Congress are already fighting for aid.

Blinken claimed that US support was the key to promoting American interests in the region.

“US foreign aid to the Palestinian people serves important American interests and values,” he said. “It provides critical relief to those in great need, promotes economic development and supports Israeli-Palestinian understanding, security coordination and stability. It is also in line with the values ​​and interests of our allies and partners. ”

The Biden administration has made no secret of its belief that Trump’s stance on the Middle East, which alienated the Palestinians, was flawed and made the prospects for peace less likely. The new support seems to be aimed at encouraging the Palestinians to return to negotiations with Israel, but there is no indication that it will have that effect and Israel has not yet weighed in public.

Former Secretary of State Mike Pompeo and former United States Ambassador to the United Nations Nikki Haley had advocated the abolition of aid to the organization, suggesting that it was responsible for maintaining Palestinian poverty and questioning whether all the millions of people it serves are in fact refugees.

Just one week before leaving office, Pompeo accused UNRWA of being “full of waste, fraud (and) concerns about supporting terrorism”, saying there are less than 200,000 legitimate Palestinian refugees still alive.

In particular, when they oppose the renewed funding, pro-Israel lawmakers signal that federal laws prohibit direct aid to the Palestinian Authority or the provision of aid that benefits the PA as long as it continues to pay scholarships to people convicted of anti-US or anti-Israeli attacks. and their families.

Already a handful of Republicans are preparing to challenge aid and claim that it violates the so-called Taylor Force and Anti-Terrorism Clarification actions, both of which passed with strong bipartisan support.

“We urge you to stop these expenditures until the State Department announces statutory restrictions and corrects known shortcomings in the distribution of such aid, which for several years has promoted and facilitated terrorism against Americans and Israelis,” Sen. Ted Cruz, R-Texas, said in a draft to letters to be sent to Blinken that about a dozen other GOP legislators are expected to sign.

The resumption of aid comes just one week after impartial government responsibility issued a report finding that the US government had not properly controlled all of its Palestinian beneficiaries of US anti-terrorism criteria under the 2015-2019 law, when Trump suspended most of the aid.